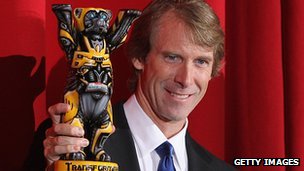 Michael Bay has signed on to direct a fourth Transformers film, it has been confirmed.

The filmmaker, who directed the first three instalments of the franchise said he was working on "a whole new re-imagining of Transformers".

He added he had been working on an idea with executive producer Steven Spielberg for the past few months.

An official statement from Paramount Pictures said the new film would be released on 29 June 2014.

The third and most recent instalment of the franchise, Transformers: Dark of the Moon, was released last year and saw US actor Shia LaBeouf reprise his role as Sam Witwicky.

Paramount said it was the fourth highest worldwide grossing film of all time taking $1.12bn (£713m) at the box office.

However, it is thought the majority of the cast, including LaBeouf, will not return for a fourth film.

The new project is part of a two-film deal Bay has signed with Paramount, which will see him first direct a black comedy titled Pain and Gain.

Starring Mark Wahlberg and Dwayne "The Rock" Johnson, filming is due to start at the end of March.

The director also hinted he may direct a TV series, saying: "I might jump onto a very cool television show my company Platinum Dunes is selling to a major cable network.

"It might be my first pilot I might potentially direct. We are still working out the details of the deal."

Hopefully the 4th one isnt as crap as the 3rd!

What I got from this thread: I want to watch Pain and Gain.

First one was ok. 2nd gave me nightmares. 3 was hurrdurr fuk yea Amurrika. Hopefully 4th one will feel like a Transformers movie again.

Hopefully the 4th one is not as long as the 3rd one! I do not know how many times that I looked at my cell phone ( it was in my jacket, so I did not distract others) to see what time it was. I actually enjoyed it, but enough is enough. It was close to 5 hours if my memory serves me. Way too long! Also, please Michael Bay, no more Lebouf screaming. It was mildly amusing back when he made Holes and the first Transformers. Now it is annoying.

This is what I hate about Hollywood. I bet everyone knows Transformers movies are garbage, even michael bay...but they make shitload of money. Can't mess with that...

Never saw the third, second one was such crap that I decided Mr. Bay didn't deserve anymore of my money. I mean, sure the script was money, what with "underneath the enemies balls" and pretty much everything the little black sambots did, but the movie would have been 30 minutes long if they cut out all the slow motion.

I thought hearing that he was going to do a 4th movie would make me angry. I'm actually just really indifferent.

(Thought part one was pretty decent.)

Even if the stories and the acting isn't the best, all three films so far have been exellent popcorn movies

Part one was okay, everything after that slowly deteriorated.

Horrible news. These movies are utter shit. No one should watch them ever.