And there we have another one of these excellent LucasArts adventures. This is a point-and-click adventure, but you play three different characters, Bernard, Laverne and Hoagie, which are transported to different times and have to work together to stop purple tentacle from taking over the world. This is sort of a sequel to Maniac Mansion, it reuses some of it's whacky characters and locations. As with many LucasArts adventures, the fun even baked into the puzzles. 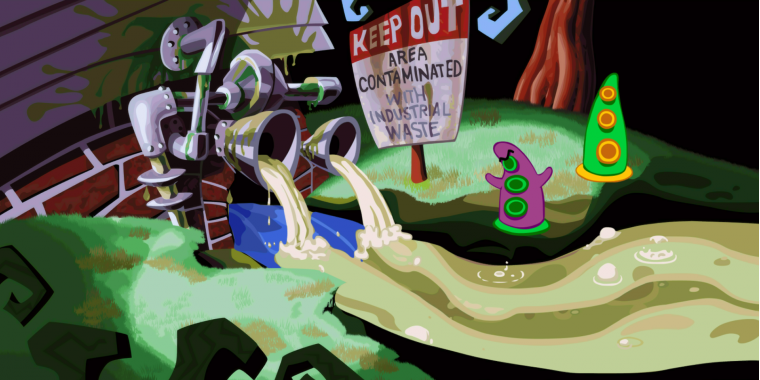 The story is set in motion, after purple tentacle drinks from the river which is filled with toxic waste from Dr. Fred Edisons laboratory and grows arms. With this he decides to take over the world. Green tentacle asks his old friend Bernard for help. Bernard takes his two roommates and goes to Dr. Edison. His roommates and the other playable characters are: medical student Laverne - who has apparently arrangements with her psychiatrist - and hardrocker Hoagie. Dr. Edison has a plan to send the three of them back a day with his time-traveling toilet named chron-o-john and let them turn off the machine producing the toxic waste. But this fails and so Laverne lands 200 years in the future ruled by purple tentacle, Hoagie 200 years in the past and Bernard stays in the present. From where you have an insane ride, with puzzles that have changing things in the past to change the future and sending stuff through time.

The characters are so great. Between purple tentacle, Dr. Edison and the three protagonist you have so much strange and quirky behaviour, this is hilarious. They interact with the gameworld in often unexpected but hilarious ways and comment on the actions. This is an all-time classic in the point-and-click adventure genre.

The game got a remaster a few years back with updated graphics.