The Liquid Laser has it right: my next game is Maniac Mansion II: Day of the Tentacle.

This is another masterpiece from LucasArts golden time of point-and-click-adventures.

For the story: Dr. Fred Edison has created two lab assistants, green and purple tentacle. With his other invention he produces toxic waste, that he puts unfiltered into the river. Purple tentacle drinks from that and mutates: he grows short stumpy arms. With that he decides he can take over the world!

Green tentacle asks his old friend Bernard for help. Bernard takes his two roommates and goes to Dr. Edison. His roommates and the other playable characters are: medical student Laverne - who has apparently arrangements with her psychiatrist - and hardrocker Hoagie. Dr. Edison has a plan to send the three of them back a day with his time-traveling toilet named chron-o-john and let them turn off the machine producing the toxic waste. The time-travel fails and the three of them are dropped in different times. Bernard stays in the present, Laverne is 200 years in the future and Hoagie 200 years in the past. Together they try to change the events.

This gameplay with different times is hilarious. If Hoagie talks George Washington (because naturally 200 years in the past the founding fathers resided in the building to write the constitution) into cutting down a tree, Laverne that is trapped in the same tree 400 years later will be freed as the tree stops existing. 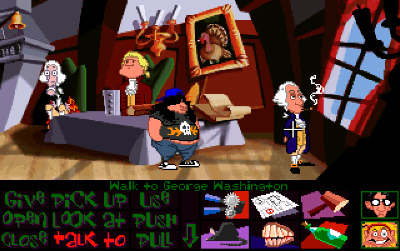 The puzzles while hilarious are still also inventive and a challenge at times. But every idea about this all is very hilarious.

Also very interesting: in the mansion is a computer that you can use to play ... the first Maniac Masion game. Completely. The complete first game is contained in the second game.

Recently a remastered version was released on a bunch of platforms, but you can also play the original version with the emulators Dosbox or ScummVM.