Forums - Sony Discussion - Playstation being American-ised is bad for the market, I think

Can't help but disagree. This gen so far after this so called "Americanisation" we've been given:

1) Astro's Playroom - plays like an old skool platformer from the N64 era. As Japanese as it can get.

2) Little Big Adventure - as above.

3) Returnal - classic old skool Shmup but brought masterfully to present day presentation and gameplay. Has huge nods to the likes of Retype and Gradius and similar Japanese games.

8) Stray - cats, puzzle platforming, small quirky gameplay elements like scratching sofa's, carpets, knocking shit over and a dedicated "meow" button. The game is as unAmerican as it can get.

Furthermore we are still getting:

Plenty of unAmericanised games and I would argue Sony is probably the biggest at this. Most of the big Sony games like Horizon, GOW, LBP, R&C, Returnal, GOT etc have no MTs, Loot boxes, gamepasses.

The games either support DLC or have free expansions / content.

GT7 which probably has the most Americanised MTs still releases free content every month and will for the life time duration of the game.

By my own policy I don't trust digital in any platform, but yes Steam is like 100000000000% more reliable than Nintendo on this front.

theyve been doing fine for now, the american market and european market will support them

Playstation have no games, all over again =p

Hey you, think you're a REAL AMERICAN because you fight for the rights of every man, fight for what's right and fight for your life? PROVE it with METAL WOLF CHAOS XD! The most AMERICAN game on PLAYSTATION! You are Michael Wilson The President of our UNITED states and are tasked with taking down the evil vice president Richard in your well quiped mech, METAL WOLF CHAOS! Who has framed you for crimes of being UNAMERICAN! What a DICK move! Show your enemies how BIG THEY ARE, guns that is.

So are you AMERICAN enough to save AMERICA? Well only on PLAYSTATION THE MOST AMERICAN CONSOLE can you buy the disc copy at your local fine AMERICAN retailer! BUY IT NOW UNLESS YOU'RE NOT A REAL AMERICAN! MECH YEAH! 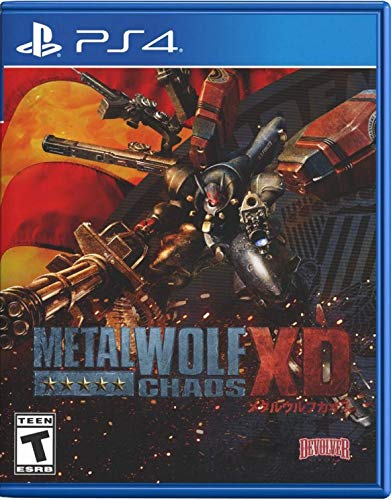 I will say SONY themselves are just so boring, generic, and kind of predictable. Think about it guys; when SONY has a State of Play, are we really there to see SONY developed games or what Japanese 3rd party game they secured?

EDIT: I think we are missing point here guys. He is not saying that Japanese games are not on PS, but by becoming so westernized is SONY letting the grip on Japanese 3rd parties dwindle? I think the answer yes. Most of the Japanese 3rd party titles that have been associated with PS have spread there wings. A big leverage for SONY is that they created a eco system that kept 3rd parties away from Nintendo, now that Nintendo is getting those games plus their own? Nintendo will smash SONY.

Quick point tho. A lot of smaller Japanese games or esp 90s arcade ports. A chunk of them have only come to Switch as someone who imports a lot.

All these + the western third parties. Sony has consistently the best (in volume, quality and diversity) lineup of games on their consoles for about 25 years now. This is not up to discussion, no Playstation console has ever sold less than 80 million copies (and PS3 was only 2 and half million copies away from 90 million) and they are likely not going to sell less than that with PS5 either

The rest of your essay of Nintendo smashing Sony. Nintendo having the monopoly of the handheld market is the reason behind their dominance, not Playstation third parties getting released on other platforms. Currently, the options for handhelds are the almost impossible-to-find Steam Deck and... a Switch. Be aware, Switch was likely to sell a lot even if it was a stationary console, but the reason why it's going to be the best selling console of all time is that Switch combines the two market: Stationary and portable.

Otherwise, I doubt Nintendo could truly overcome Sony's dominance in the stationary console market. Be a good rival like Xbox, yes, but "smashing" Sony? Nah