Horizon renders in checkerboard mode first, then upscales the result with sharpening instead of TAA. That gets messy when most of the screen constantly changes with foliage moving in opposite directions in front of each other. Especially with a sharpening filter on top to make the edges stand out after upscaling.

FSR uses motion vectors to help with temporal reconstruction. Yet I imagine there won't be a motion vector for every single leaf and blade of grass waving about in the wind. It would be very computationally intensive.

TAA removes this high frequency detail. FS2020 uses quite an aggressive form of TAA which removes small details, like small lights, windows and highlights. You get that detail back with supersampling, render at 4K, downsample to 1080p, but that's quite the opposite of trying to gain performance :) Yet super sampling is the only way to solve the softness vs noise conflict when you have lots of fine detail like foliage, power lines etc. And as seen with Horizon, double the frame rate, double the shimmering. (Of course the lower base resolution in performance mode makes a huge difference as well)

It's all a bit counter productive. Upscale to 4K yet lose fine detail in the process. That what you want to see more clearly, gets removed by TAA. I'm wondering if FSR can do a better yet at preserving fine detail without introducing shimmer in motion. 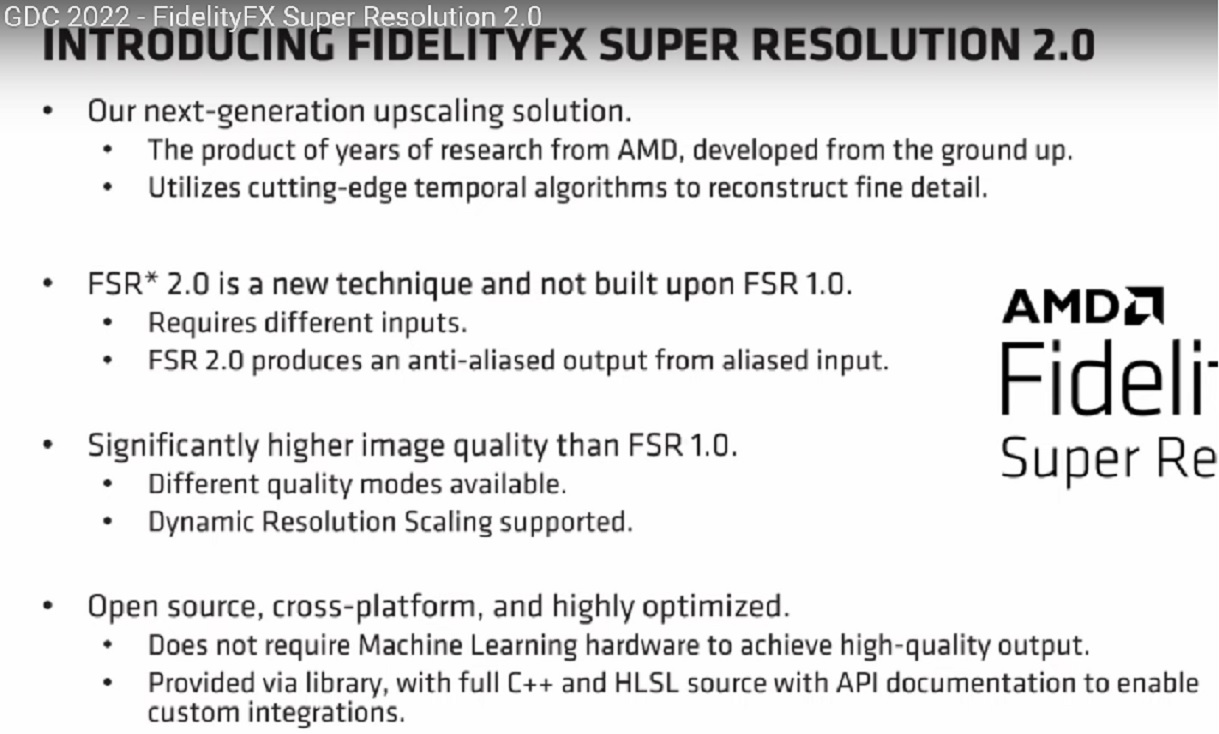 It'd be nice if we could disable most game AA like TAA since 2.0 is taking an already aliased image and producing it's own output, but I doubt that will make much of a difference, I just really dislike Cyberunk's TAA and disabling it completely via an ini file produces bad results (You pretty much have to turn off SSR, because without TAA SSr is totally messed up and relies heavily on TAA).

It does sound a bit odd how they mention 2.0 being built completely from scratch and the ground up, which kinda tells me that FSR 1.0 was merely tossed out into the crowd to entertain, while they worked on 2.0 (esp since 1.0 hardly got many updates to it's progress, while 2.0 looks like a big changeup).

I take it input resolution is your monitor's res, and output is 2.0's ideal result? (kinda comes off as confusing when they could have just stated input as monitor res and output as FSR 2.0's res).

Yup, vastly improved over spacial tech they had going on. Which though was okay, though gave results not much better than a simple sharpening filter, without effecting the UI, text etc. At best FSR 1.0 felt like AMD's stop gap solution and marketing device to push their branding for its own upscaling tech until their true FSR (2.0) was ready - their answer to Nvidia's DLSS.

Moving to a temporal upscaling was the only way to go. With the the industry moving towards better upscaling techniques, this is pretty much what was needed from them. They were falling behind behind Nvidia in many key areas like having a good upscaler though now its looking a lot better for AMD. Granted they still need better Raytracing performance - something we've been hearing from 'insiders' that RDNA 3 will fix that.

For the graph, is the internal resolution before the upscaler does its thing and the output resolution is what is displayed on screen as an output. So for me I have a 1440P monitor. When I enable FSR 2.0 on a compatible game, at quality setting.. it will render the game at 960P and upscale it to 1440P and it should (should FSR 2 work as intended) give image close to native or better with anti-aliasing applied.

I just have to wonder now if CDPR will work out implementing 2.0 with Cyberpunk and seeing if they'll rework their version of TAA, because afak, 1.0 has trouble with it's scaling due to how 2077's TAA works, which does involve perf drops, ghosting at times and a blurry image in any sort of motion (even with motion blur completely disabled along with CA).

I'm also hoping this gets devs in the future to rethink how they go about their own AA solutions, that won't disrupt DLSS and FSR 2.0, because the last thing we want is a dev screwing over new tech because they thought their game would look better with a malformed version of AA that other devs aren't using in the same manner.

As a console player im hoping 1440p 60fps with all the fixings becomes the staandard now. I'm pretty sure the consoles where build for that so fsr could take them to 4k.

Cool, yeah its nice to have options.. since I don't currently have a RTX card and don't plan to upgrade until later this year. But yeah at least its usable at this resolution, unlike FSR 1 lol.

I did read that FSR 2.0 overrides TAA in games so it shouldn't be as much of an issue.

It already has DLSS....
So adding FSR2.0, should be like 1-2 days of work (max 3) (according to AMD).
Just a question if they can spare (bother with) a programmer, working a day or two on it.

Now that you mention it, could be a reason why Nintendo is not doing any AA on their Switch games, as they'll be upscaled next-gen with DLSS.

Or does the implementation needs some sort of AA applied before upscaling?

If they engine they made the game on allows for it, its not that bad supposedly (DLSS or FSR 2.0).
The thing is, I'm not sure how much nintendo cared about forwards thinking, when they design their games.
Like, when they made the last pokemon game, did they think "in the future, we might port this to Switch 2, with FSR2 or DLSS" when they where planning the game? If they did, its probably not that many extra steps. However knowing Nintendo,..... they probably didnt, and it'll require possible a few weeks or months for each game.