Well in performance mode (quarter resolution?), it's producing a comparable image quality to 4K native in the still comparison while near-doubling the framerate. Twice the fps with a "promised" minimal hit on IQ is absolutely huge unless other settings have been stealth tweaked (like shadows) to exaggerate the benefits.

Personally, unlike previous generation resolution leaps, I can't tell the difference between 4K and 1440p without a zoomed side by side comparison or looking far at the distance. So anything that persuades developers to target lower internal resolutions in favor of pushing visuals and game design is a big win in my book. DLSS 2.0 and FSR 2.0 (if it lives up to its promise) are godsent for saving resources and redirecting them to areas I deem more important.

I have little doubt that DLSS has a greater room for improvement by tapping more into exclusive hardware parts like tensor cores, but I'd be pretty happy if FSR ever comes close to the current DLSS version. I honestly never thought it possible on weaker hardware. Granted promises often don't pan out; stills don't tell the whole story, and AMD will be sure to cherrypick the games that best mask its shortcomings in demonstrations. But for the first time, I have a good feeling about this.

Time for a update to this (because CapFrameX, actually did a small compairsion between "FSR 2.0 quality mode" and "DLSS 2.3 quality mode". 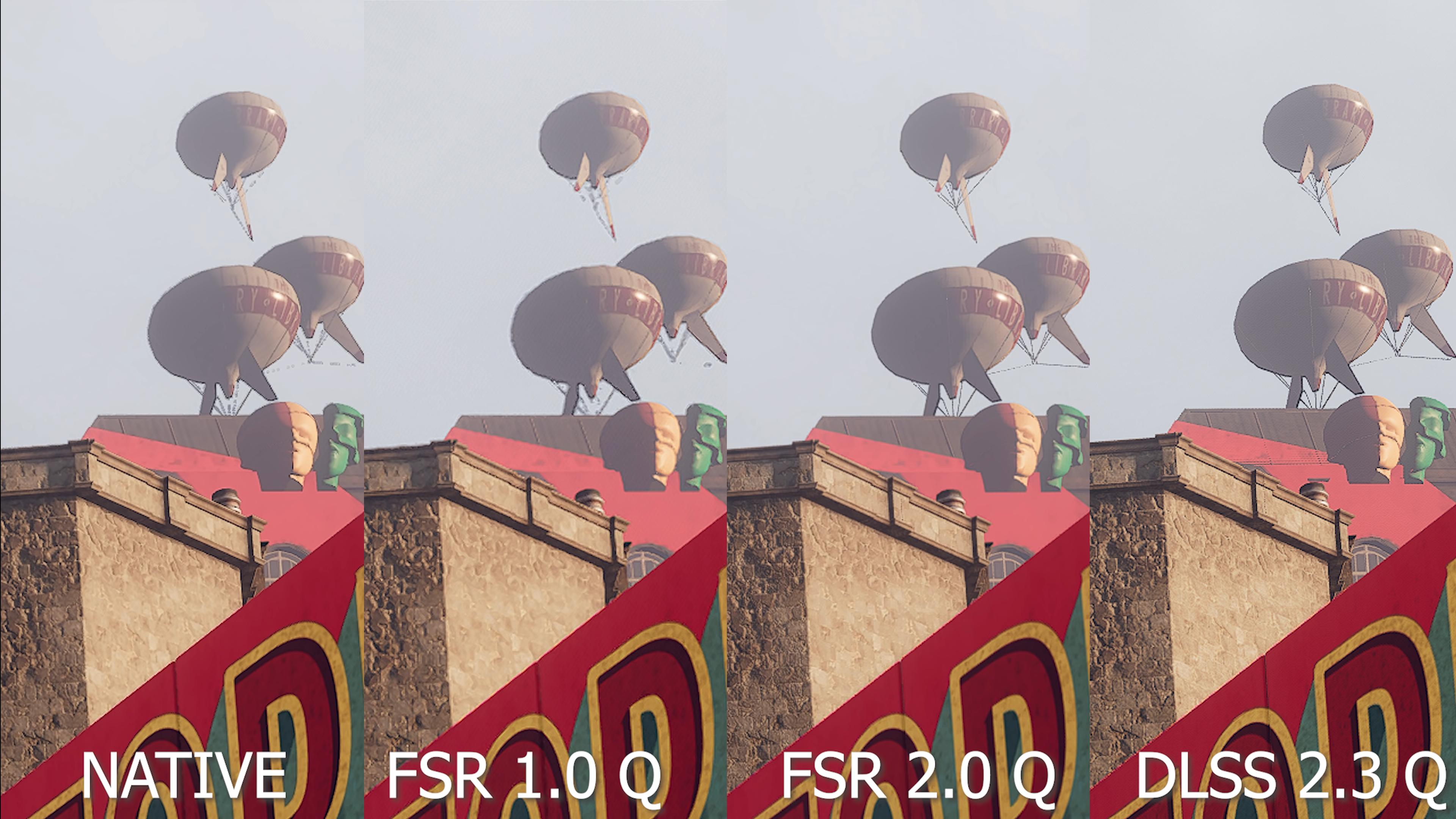 Hopefully this link works, and stays up to showcase it (even if the FSR source is a youtube video, vs a screen grab for DLSS)
And also GDC 2022, is comeing up, with AMD supposedly going deeper into showcaseing FSR 2.0.

So more to come soon.

Found a video on YT, by the guy that did the side by side:

The screen grab isn't all that bad, but I'd rather see 2.0 out in the wild for people to do their benches, rather than relying on AMD showing them off, because we all know Nvidia/AMD tend to show off their tech when it's in a favourable position (like seeing Nvidia showing off raytracing for games designed entirely with DLSS and RTX in mind).

Big improvement over 1.0 so there's that. I'd stick to quality if FSR 2.0 is your only option.

2.0 looks a tiny bit blurry, but still good nonetheless. Though those two pics have the character looking at objects that don't typically stand out for the aliased types, they could have looked at distance wires/cables and rooftops or smaller objects in the distance that give off typical jaggies.

The slide bar comparison method is far better than triple shot side by side pics, hope we see more like that for this (esp when you have to consider that youtube has horrid compression and would make FSR 2.0 look good without us seeing the actual details).

The first one MTAxMDI2, you see around the gloves, the gun itself, the text "brain" with the rays, and the "queen of riddles" text, same with the OP letters in neon in the background, all look better with FSR 2.0, than the native shot to me.  The only spot, zoomed out, going back and forth with the slider where I think native wins out, is on the tv screens, where the fsr sharping brings out these streaks (which I dont think was the look the artists where going for).

the 2nd slider, MTAxMDI4, is much harder for me to point out differnces when zoomed out.

I wonder if this can help a game like Horizon FW, with lots of high frequency detail constantly changing frame to frame.

Waving foliage flickering in performance mode is still not fixed and might not be possible to fix. Upscaling what looks like 'static' noise is very tricky. Either you make the whole image very soft like FS2020 does with their TAA implementation for upscaling, or you get sharpened high frequency mess.

It's a trade off, more detail means more high frequency contrast, which is harder to upscale. Lower detail, you don't really need 4K, but maybe it will help with RT to maintain a steady fps.

I just noticed, but I had to squint a few times, especially looking at distant text to pop out the same way the Queen of Riddles text did (that text pops easily in 2.0 vs native, each time you slide it).

I've noticed that some colours like the reds appear slightly blurrier in 2.0, but that could just be a banding issue. I believe FSR's sharpening is what is making that Queen of Riddles text stand out, now I think of it.

The 2nd Slider is the one I feel is the least worthwhile of a slider, mainly because of it's angle, a huge wall is taking up nearly half the screen and the cables to the left are rather close and angled in such a way that makes jaggies not show up as much.

I'd like to see this included in as many new games as possible, but since it's AMD and they want to show it off more, they'll likely include it in said games they'll be showing off more often, making it another cherry picked line of examples, which is why I want them to let devs add it to as many games as possible so we can see other people's examples of better angles.

I'd choose FSR without a doubt if it was the only option of saving more perf, but if I had an RTX card I'd be using DLSS, but seeing as how I don't atm, I'll be going with FSR like I am currently in cyberpunk.

Since most of you on consoles play from a distance, using 2.0 will make it a worthwhile addition to saving perf since the image quality is already close enough, but we'll see how it fares with Cyberpunk, as they use an aggressive form of TAA, and FSR 1.0, even at 1440p, still produces jaggies and shimmering (And the sad thing is, if you disable Cyberpunk's TAA, it looks worse and FSR 1.0 has forced CAS sharpening, which you cannot disable manually, but I managed to via an ini config and it fares a bit better).

Do we know what AA Horizon FW uses?. I think it could work, but I'm left wondering about the abundance of foliage the game has and how it will look. I imagine FW will be a real test to see how 2.0 would deal with jaggies and smoothing.

As long as it doesn't have aggressive TAA, it should be fine, though with the advent of TAA and devs using slightly different variants of it these days has got me wanting devs to just agree on using one version of it for FSR's sake.