I always wondered how big the potential console market really would be. Let's suppose Microsoft, Sony and even Nintendo would give away their consoles for free, not even tied to a subscription. let's suppose they calculate they still would make enough money just through regular subscription fees, selling of games, dlc's and accessories. That would force the biggest console market possible. How big would it be? 300 mil., 500 mil. or more? Personally, I think, it wouldn't be much bigger than 300 mil.

Absolutely baffles me how anyone can look at the sales, hype, software backing, and brand track record of PS5 and think it's going to underperform.

Switch was sold out and supply constrained in its first year, did it decline once it was no longer desirably unattainable? No, and neither will PS5.

PS has built itself up as the place to be for AAA gaming and I see no reason for that to change when PS5 has made no significant missteps and is on track to inherit not only the vast majority of 116 million PS4 owners but also a big share of the new gamers who are growing up and entering the gaming base over the course of the generation.

We already know NS OLED launch did very well the week after the one of this thread, so no surprise about that.
But doom and gloom about PS5 that still having supplies issues couldn't outsell NS the week before new model's launch is funny. BTW PS5 sales won't be particularly surprising, as Sony already declared it secured enough components supplies to reach 22M PS5 sold by FY end, that's 31 March 2022, probably that's the minimum amount it secured, maybe finding more of them at the right price it will get some more supplies, but what counts for the highest selling weeks is how many units Sony will be able to build, ship and sell in the BF and Xmas season, with short supplies, what Sony secured puts an upper limit on what it will be able to sell in those weeks, as components shortages aren't likely to get completely solved before Xmas season ends.

Here we see data representing the global sales through to consumers and change in sales performance of the three current platforms (PlayStation 5, Xbox Series X|S, and Nintendo Switch) and three legacy platforms (PlayStation 4, Xbox One, and Nintendo 3DS) over comparable periods for 2018, 2019, 2020, and 2021.  Also shown is the market share for each of the consoles over the same periods. 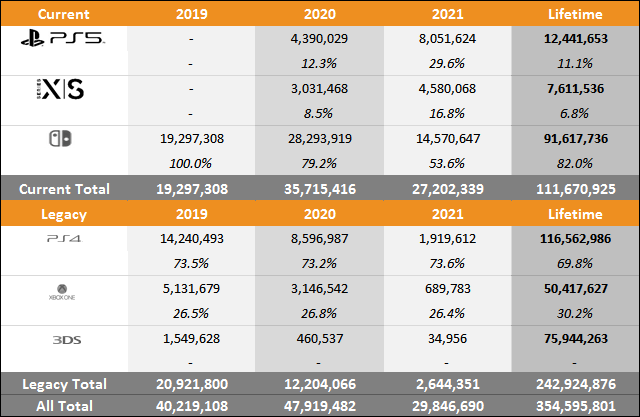 Switch being 58.9% up over 2019 is damn impressive when 2019 was a strong year in its own right, and that number could increase a lot depending on how the next few months play out.

This scenario would catapult the install base to over 800 million, but the vast majority of them wouldn't be used much. 300-350 million unique owners sounds about right.

7th gen was over 270M counting only home consoles, with MS botching its head start with RRoD, Sony botching its launch with initially horrible prices and Ninty killing early an invincible market leader.
A free HW gen, with at least Ninty offering portable capability too would reach at least 400M users IMVHO, but probably, with enough free and low price games thrown in the offer, even more, as it would attract a lot of currently mobile-only gamers. It could attract a slice of PC gamers too, the most casual ones and those that have a PC still good for work or browsing, but getting old for new games and not wanting to upgrade it, but not hardcore ones that are ready to spend more than a console price for a gaming PC, and those that like a more free gaming market.

Yes, I get you mean unique gamers, not units, but considering that multiple same-gen console owners are a small minority outside of the richest countries, and that there are many gamers that don't even buy a console each gen, and that PC users are far over 1B and mobile ones more than twice, and around 30% of PC ones and far more of mobile ones are at least very casual gamers, and 10% of PC users are estimated to be more dedicated than casual gamers, the potential market for free HW console gaming is huge.
if we talk about units sold, well, actually given for free, many gamers would get at least two free consoles, as Ninty games don't overlap much with competing platforms ones, so we could expect at least another 100M units for 400M gamers.

BTW, if you consider that Sony and MS consoles are general purpose multimedia devices too, we could expect even more units delivered, even to non gamers, but those ones wouldn't contribute to gaming market, so I accept it's fair to not count them in your scenario.

Next week is going to be the interesting one. 2020 Switch never went below 500k again, with 1.5m down YoY for the Switch it's going to be a tough battle for those that believe 2021 can win. Personally I don't see it, but it all comes down to how big the boost is next week and how much it holds.

Switch might not have had a new model or even a good holiday line-up last year but it sold like a beast, even with the OLED that's a tough battle.

Yes and Switch sales will fall off like they did with the Wii.