I would say you are missing the point a bit if that's how you want to actively approach the game at all times, but there's definitely room for experimentation in Monster Hunter. Monster Hunter isn't an RPG per say, but the stats of your weapons and armor are still pretty important in making sure that your damage output and defense scales better with the increasingly challenging monsters. That's how the time sink works, you get to a new area, craft new armor and weapons, and now you can kill the harder monsters and move to the next area. Though it's important to note that most weapons and armor sets scale pretty well for a lot of the challenges in the area/beginning of the next area you got that armor set from, so it's not like you need to grind every monster, moreso the ones you choose and only when you hit a new wall.

Monster Hunter's difficulty isn't really a traditional "this is the super hard monster, and this is the easy monster, so I might as well skip the easy one". At least, not for the pre-World ones. Most monsters, even the early game ones, have some kind of check to make sure the player understands some game mechanic or know how to counter something. And of course depending on what weapon and armor set you have, some monsters might be significantly easier for you than it is for other people, and vice versa. That's why a lot of people have different "walls" in which they have to train to fight one specific monster, because everyone kind of has different experiences in what mechanics they have to learn or what builds and weapons they have to master.

Though as previously mentioned by Shaunodon, you can go on expeditions, which are like a free roam you can do in the areas you've unlocked. However, and I may be wrong on this but, I don't think EVERY monster in that area is available as soon as you go on an expedition. Some are unlocked when you first encounter them in a story moment, for example. I might be confusing that with the mechanic though where challenging monsters you see in other stages eventually come over to previous stages you've been in.

Glavenus feels like he should be a shoe-in considering he was in World's Iceborne expansion and from what I understand the monsters which were already in World are using the same textures and models in Rise (I.E. Rathalos and Rathian are using World's models).

But if they don't get in, remember we always have free updates. I think World got ... 6 new monsters through free updates?

Speaking of free updates, I kind of hope we get a crossover with Zelda, Mario, and Metroid that results in a new monster as well. They've done crossovers with those franchises before, but I don't think it was until Final Fantasy's Behemoth that Monster Hunter's main games actually had an entire monster made to crossover with a franchise. And they didn't just do it once, either, World had a crossover monster with The Witcher 3 too! It would be cool to see Ganon, Ridley, or Bowser as a huntable Monster in Monster Hunter (think Bowser is probably my least favorite choice of the three). Maybe not all three in one game, would make the list of updates kind of crowded with cameos, but still ...

I don't expect it though, just woulld be cool.

I've played every mainline Metroid EXCEPT Metroid 2 (not counting Other M or Prime 2 and 3), so when you proposed this idea I was thinking of just a really big Metroid flying around, maybe with a head somewhat akin to Mother Brain but with a Metroid where the brain should be, and I was like "uhh ..."

But then I look up Metroid Queen and wow ... 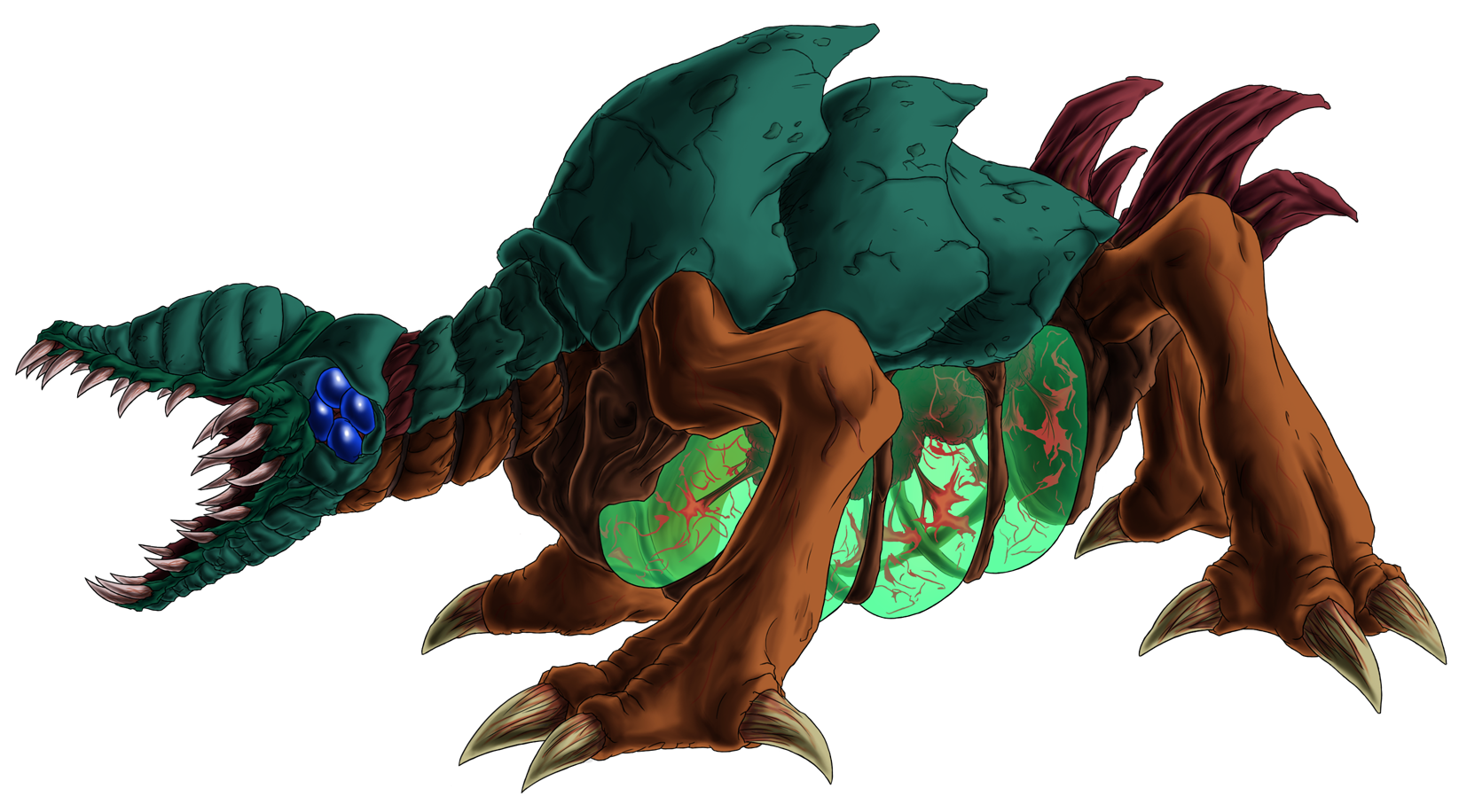 This thing really WOULD fit Monster Hunter! I'd hope it has some sort of tag-team gimmick with some baby Metroids, similar to how Seltas Queen from Monster Hunter 4 Ultimate used a normal Seltas as a drill for it's head (which funnily enough was in itself a reference to Gurren Lagann) and also as another enemy combatant for the hunter to fight

Nice. So it seems this game is ideal for discussion in forums and the like. I mean, it was evident from the fact that Monster Hunter titles are often among the most talked in GameFAQs and other sites, but I like what seems to motivate such conversations. RPGs are also like this, they inspire a lot of talk, but I don't typically get into forums around them until I begin the endgames, when deeper or simply different builds are required; before that, a general, simple strategy works throughout most the game. But, by the sound of it, Monster Hunter seems to be more varied from the start of the playthroughs, it always pushes you to find different strategies for each monster. Is that correct or am I overestimating it? lol Either way, crafting armor from goods obtained from fallen enemies is always my jam. I also like the elevated detail of the visuals in the game, it might not be the best looking thing in the system and it's quite far away from World but it totally has a unique appeal to it.

Oh boy, this title. So... the game looks very interesting. However, I'm not sure if I should get it or not. My history with Monster Hunter goes back to Monster Hunter Freedom 2 on the PSP. I liked the game and I put something like 10-20 hours into it. But after a while it got boring and I stopped playing. I also played Monster Hunter 4 Ultimate on 3DS: A friend of mine and myself preordered the game and planned to play it together. And we did - at least for a while. But I again stopped playing after roughly 20 hours.

I think what bugs me with Monster Hunter is the gameplay loop: You hunt the same Monsters multiple times to craft new weapons and armor... which rather quickly become too weak for more difficult missions, so you have to grind again... or at least that's how I remember it. I can get behind a bit of grinding in RPGs (even though I prefer RPGs with fast-forward functions like the PS1 Final Fantasy games on Switch or Dragon Quest XI) as you grind to overcome an obstacle so you can move the story forward. However, in Monster Hunter it felt to me like the gameplay loop was to do grinding so you can do more grinding right afterwards. Fighting a Monster for a prolonged period of time, multiple times, then farming stuff like honey just so I could fight that monster once again just wasn't a lot of fun. I realize that some people dig this style of gameplay loop a lot: A friend of mine is majorly into World of Warcraft and he always talks about doing raids and killing the same bosses over and over again to get an item with a 3% drop rate. I'm happy he's so into the game, but I'm not sure if I can enjoy something like this.

Also, (from the perspective of a relative newcomer) when I played the Rise demo it felt like someone had thrown a pair of dice to determine which button on the controller does what. But I played Dark Souls right before that, so maybe I just got confused.

Bottom line: I want to get into this series, but I'm not sure if I can. Did Monster Hunter get more newcomer friendly since the days of Ultimate 4? Or is it still baby steps? Because I remember reading with each new entry that they changed something to make the game more streamlined, but it was always just a few little things.

Edit: The fact that Curl mentioned you'll need less materials to craft armor this time to speed up the process gives me hope.

Monster Hunter World made a ton of accessibility and quality of life changes over previous Monster Hunter games like 4 Ultimate in order to make it more streamlined and newcomer friendly, and these all carry over into Rise, in addition to even further tweaks.

Here's a piece that talks about some of the ways they're trying to make it easier to get into:

Whether or not you find it a grind is ultimately about your perspective and mindset. If you're just looking for pure monster fighting gameplay with multiple ways to approach it and challenge yourself, you won't find much better. If you're looking for a nuanced experience with multiple different ways to entertain yourself, you're not going to find it here, as it ultaimtely is just one striaghtforward gameplay loop.

I'd also be hesitant to really consider these games RPGs, as there's very few elements in the game related to the genre outside of weapon roles and equipment progression.

Think about the game like Dark Souls; cut out the character stats and leveling; and instead of a giant, open-ended, multi-sectioned, medieval-horror themed map, you instead access a bunch of separate hunting areas each large enough to have their own little sub-areas.
Gameplay mechanics are very similar, especially if you're familiar with the soul level one challenge for Dark Souls which is basically Monster Hunter. Both focus directly on gameplay challenge and a freedom for letting the player choose their approach to that. Both also focus very little on any overall story narrative, though at least with Dark Souls, you can find some if you're willing to look hard enough.

It's the type of game where you really have to motivate yourself to enjoy it, rather than relying on it dangling a bunch of interesting features, side-events or a compelling story to pull you forward. But once you get past that initial couple dozen hours; once you begin mapping out the type of role you want to play, the different weapons you want to try and find different ways to challenge yourself more and more, that's when it becomes addictive.

None of that even goes into the co-op.

Thank you! I'm going to read through this once I get a break from work.