These are the lifetime figures in Europe for the games you mentioned. LittleBigPlanet, Resistance: Fall of Man and Motorstorm reached 2.01m, 1.72m and 1.61m, respectively, but they were pack-in games for extended durations which is why their sequels didn't get anywhere close to the same numbers.

19 third party games released during 2007-2009 exceeded 1m units, including all the yearly releases of FIFA, Pro Evolution Soccer and Call of Duty. The combined sales of these big third party titles outsold Sony's games by a ratio of roughly 3:1.

The PS3 bestseller list in the USA was also dominated by third party games, just as the 360's was, so first party software didn't have a big impact during that generation.

This just leaves the question of global console sales, but would there have been a lot more people to skip the PS3 if it hadn't been for Sony's games? I doubt it, because familiarity with the brand and multiplatform games remaining on PS was a big enough draw for the vast majority of the audience, plus despite Sony's blunders there remained a clear advantage in Japanese third party software for the PS3, making the console more or less unskippable for gamers who prefer Japanese games. The PS3 also had free online multiplayer.

"The only reason I'd buy a PS3 instead of a 360 is Sony's first party output." - That's something that won't have applied to a lot of people during that generation, and that's why I consider the impact of first party software to be very much overstated by the PS fanbase.

Supply is more important than demand at launch. Die-hard fans and other early adopters will buy whatever there is to buy. So, I wouldn't jump to conclusions about future performance based on this. How well a system did on launch month never really correlated to how well it would do lifetime. 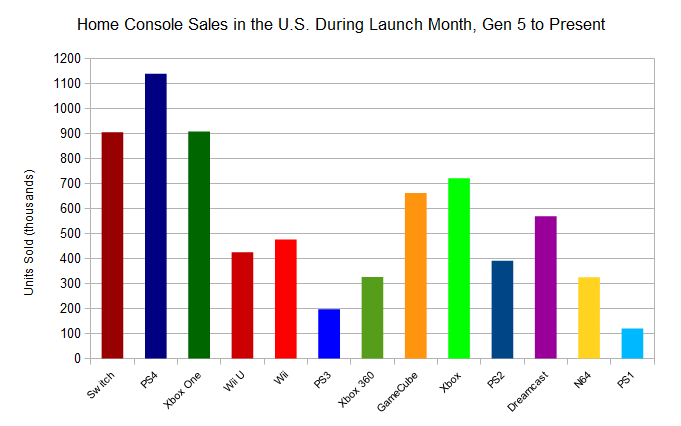 While the more recent systems have had good launches, we had instances where systems that went on to be super-popular had far rougher starts that other systems that had great starts but not-so great lifetime sales. For example, the 360 was supply-constrained at least until April 2006, and the PS2 was supply-constrained until March 2001, with both having relatively unimpressive launches and lackluster sales prior to the restocks, but they are the two most popular home consoles ever in the U.S.

Once we start getting into 2021 and the stock situation is fully resolved for both systems, we should start to get a more accurate picture of how this generation may possibly play out. I'm expecting next year to be quite close between the PS5 and Series X/S in the U.S.

Kind of expected. The hype levels betwen the 2 had the biggest gap I have ever seen. I think you can have a Sony exec say hi on twiter and it would have gotten more likes than a full xbox presentation.
I just dont buy the stock problem. These companis expected a level of demand and they prepare for it. They must have known that the x1s had tanked the series x demand. They would never over supply a product as that would devalue the product and kill some of the hype. Had any of theese companies actually met demand it would actually be a bad thing. Thats how manupulative sales tactics work. So both produced just a bit under what they expected to sell tonartificially rise demand.

i'm surprised the series s is available in australia. I thought it would have been sold out.

Like what happened before the big bang, it's a great mystery ( to me ) how I can edit a comment, and instead of the edit, an entirely new comment is created, and the original comment remains as well. This space should still serve some purpose beyond expressing my bewilderment however.

There does seem to be something of a gap, and it's manifested itself in a few different ways in the lead-up to the launch, and throughout the launch window. One thing I caught that I found interesting is the mentions of PS5 and the PS5 shortages on comedy shows. Last Week Tonight With John Oliver, Late Night With Seth Myers, Tosh.0, Real Time With Bill Maher, and last week SNL had a PS5 skit with Eminem. No mention of Xbox Series X-S on any of them.

How did Sony manage it then? To outsell the PS4.

Microsoft had the same opportunities, in fact with their money behind them and world presence as a company, they should have been able to make more than Sony.

Where? I can't even preorder any of the models atm lol. All the waves sold out.

Hm... all time sales record is not impressive?

By black friday both consoles were already sold out (launch day/week), of course the Switch sold more than the other ones you couldn't even buy...

I'm pretty sure he doesn't want to pay scalper prices for a Series S.