Forums - Gaming Discussion - What threat does Gamepass pose for Sony in the long run?

1. I could be mistaken but I believe Netflix profited almost two billion last year? Netflix isn’t the best comparison if you’re predicting bad things for gaming, because the service not only makes money but it produces massive, expensive content. I’m sure Disney+ and GamePass lose a lot of money, that’s how new services and businesses work, especially these kinds. You have to buy all this content and you have to offer it dirt cheap to get people interested. It’s a long game.

2. Big games do cost more money which could lead to bigger losses but they also make more money. Sony said this gen something like 7 out of every 10 of their games aren’t profitable. But those 3 that are, make huge profits and offset the rest. You can invest more money into a huge project that you think you’ll see a return on. For example, Disney spent over 350,000,000 to make the last Avengers movie. They’re ok with that, because they know it will profit billions. But does that mean they’ll also spend that amount making Spider-Man or Ant Man or Doctor Strange? No, that wouldn’t make sense. Games are the same. Sony wouldn’t spend the same amount of time and money on Sackboy as they did LoU2. Also, a stark difference here with original content for video services, is GamePass games are available day one outside of the service. So why would MS invest less into a Halo or Gears or Avowed because of GamePass, when they’ll also be charging $60-70 for them outside of GamePass? They can still get that retail revenue, AND GamePass.

3. I don’t see why a GamePass service would lead to less big game projects. Many of the most expensive television series of all time are on subscription services. Even the movies are starting to catch up on blockbuster Hollywood numbers. IIRC Netflix has three 200,000,000+ projects in the works and Amazon has the Lord of the Rings, which is more of a series but will supposedly cross the billion dollar mark. It also hasn’t affected quality... in fact I would argue subscription services have past broadcast television years ago. Every now and again you get something like a Breaking Bad but for the most part network television and basic cable blows. And even Breaking Bad was a cable network.

I just don’t see the logic that GamePass will lead to worse games. You don’t get people subscribed to a service with weak content. Value doesn’t matter if what you’re getting isn’t valuable.

1. Netflix is actually over 12 billion in debt to pay for that expensive exclusive content. They are currently losing subscribers and stock prices are declining.

3. If everyone says it's great value and saves them money -> less money goes into game budgets. It's simple logic. Fargo on cable is very good! I haven't seen a good show on Netflix in a while, would love recommendations!

Imo, TV quality has declined, I'm watching less and less as the years go on. It doesn't help that what I'm interested in is spread over different streaming services thus I can't watch it. It's nice when you live alone and can switch services on the fly to binge watch what they have to offer, doesn't work like that in a family setting.

And that debt will get higher and that's fine, Netflix has been trending in the right direction for a few years now. It's just how they do business. IIRC Disney is also in a lot of debt.

You can buy all of these games outside of the service. It's not as if GamePass is the only way to experience them. Most Xbox owners and PC users still don't use the service. A monthly service fee and enticing users to buy DLC and the games themselves on sale can also recoup much of what you'd otherwise lose thanks to the used game market. MS is also not Netflix and not in any debt.

Your concerns are not unique but I just don't understand them. For these fears to come true MS would need to start limiting their software to GamePass or, at best, delay the release outside of GamePass for like a year after it hits the service. Then they'll have to find a way to get people to stay subscribed to the service while they apparently release small scale filler because they are cutting all the budgets. Also you mention Netflix and debt and admit they are paying for expensive content... why isn't Netflix cheaping out? Because they know that no one will want to buy cheap content. There is Hulu for that.

Actually its not necessarily false. On GP you can download all the game library on Xbox One and PC and now on Series X/S. PS Now only let's some games download to PS4.

I think you missed the overall point I was making:

1) This is MS, not Sony or Sega. Going by history they like easy money. Whether they are successful or not they barely invest in games. When they have a monopoly they are worse. Office 365 is more expensive than any office package in history and you get less for more in comparison to the Google Alternative. The same goes with Teams and the Google Alternative.

2) nothing gives me any confidence that MS will pump big money into games once they have a monopoly or the tide shifts in their favour. They will take the losses now as in the long term they can cut down budgets and offer lesser quality content for the same price or more. No one can say shit since it's not like you'll have an alternative to go to.

3) Sony can't pull today same shit as their non Ninty and don't have MS money, so they will either be forced out or forced into making cuts in budgets.

Everything points to a grim future in gaming. EA and Ubisoft have been getting away with making games around microtransactions. Yearly COD and BF games designed around battle passes and microtransactions. MS investing in filler content like that beat em up NT made orsmaller games like HellBlade.

Not saying they aren't increasing big money as they still have Halo, Gears, return of Fable and Forza, but their output compared to Sony has been extremely weak.

Let me put it differently, when you are a parent and you live your child, you will try keep them from harmsway. You'll say don't do drugs, don't smoke, don't drink etc. Non of these things will kill them, but there is a chance it might or they may get into bad habits.

Gamepass can be good for the industry and consumer, but I believe it will be better and safer for all of rather than day one they put the big titles on there 6-12 months after release.

Society is becoming more hedonistic and careless which is the concerning factor. Proper don't think 3, 5, 10 years ahead and what the consequences can be. They get free / cheap stuff now, who cares about later, we will deal with it then, but by then it's too late.

The first signs is MS screwing the pooch will come when games like Doom, Dishonoured, Wolfenstein become second tier releases with smaller budgets and teams or get shelved all together.

ES will do well with a over a gen release followed by season passes and MTs, but we will probably see a huge reduction is staff as they merge staff across obsidian and Bethesda.

Keep the IPs shed the fat. 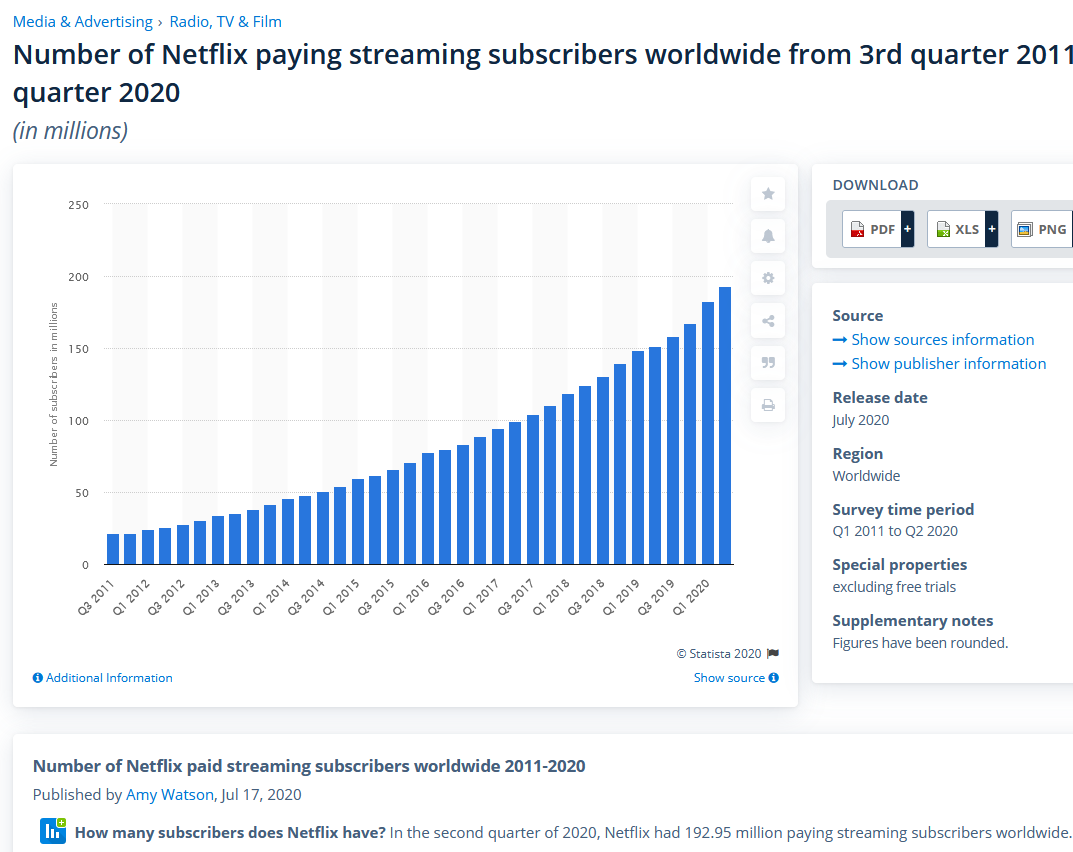 Netflix stock prices are declining? They are near their all-time peak and their performance outlook is positive (short, mid and long term):

Did Forza Horizon 4 become a second tier release with smaller budget and team due to its release day one on GamePass? No, it was bigger and better than ever and got high praise from both critics and users. And due to its small entry fee (GamePass), it will keep popularity much longer, which is important for the online part (many players online to race with).

Did Ori 2 become a second tier release with smaller budget and team due to its release day one on GamePass? No, it was much bigger than Ori 1 and got high praise from both critics and users.

Will the next Forza Motorsport become a second tier release with smaller budget and team due to its release day one on GamePass? Obviously not. If Microsoft wanted an easy cash grab, they would have released it as a launch title with minor improvements instead of giving it more time and budget for a "true nextgen experience".

They were losing subscribers last year in the USA and shares fell in July after posting their earnings. Both have gone back up thanks to covid-19 which also artificially propped up console and game sales. This effect won't last forever when the results of the recession start to hit and the market further fragments. For now Netflix still has quite a monopoly outside the US.

Debt is fine as long as the market keeps growing exponentially, it won't. Netflix can't cheap out indeed, they can't keep expanding debt indefinitely either. Plus their prices have doubled since they started plus extra for 4K, how much will game pass land on to make it profitable?

Sorry I didn't make it clear. I'm not in about big blockbusters that define Xbox or IPs they own that being in money. I'm in about games like Dishonored, Doom and Wolfenstein that aren't really big sellers and often get discounted fairly quickly. You would need to be a very optimistic person to believe that these games aren't in danger of the chopping board.

Season 4 of Expanse is out in December last I heard. Obviously Netflix is more expensive now, it used to just rent out DVDs.