Agreed that just as PS4 sales will end up a little below PS3, PS5 sales should definitely fall below PS4 sales. PS5 is gonna have to compete against a completely dominant Switch from the get go, meaning there is very little chance it sells as well as PS4. 8 million is a reasonable expectation. Also I would certainly expect some of those big japanese games start moving to Nintendo, or at least be launched on Switch as well, which will hurt PS4 sales when it doesn't have those big Japanese as exclusives. Some of them will stay exclusive to Sony (to their own detriment), and some will be multiplat. It is obvious that something like Dragon Quest should be made Switch first and then ported to PS5, but something like Monster Hunter will probably just stay on Sony and then get ported to Switch 2 later on now that it has become a big western title and they seem to want to focus on graphics rather than dominating the Japan market.

Sony has all third party support and the results was a market decrease,  the ps4 contenders: one disastrous stationary console ( WiiU), an old but good console ( 3DS), and another niche console ( PSvita) in Japan.  This not good. PS3 fights against the better portable all time( DS), another great portable (PSP), and a great action carnival arcade machine( Wii). Don't have the same support. And maybe, in the end, sell the same.

With the way Switch is dominating, I just dont see PS5 topping 8 million

It's looking less and less likely that PS4 will manage to reach PS3's Japanese sales.

From what we know of PS5 thus far, it doesn't seem like it will arrest this decline either.

PS5 is a considerably easier market. You guys continue to miss the driving factor for software development: software/ecosystem sales.

3DS/PSV was stronger competition to PS3/4 than SW will ever be, simply because they allowed devs to go exclusive to those platforms. SW can't do that because PS4 makes too much money for JP third party devs.

case in point, CAPCOM. PS4 has almost 8 times the sales of SW. 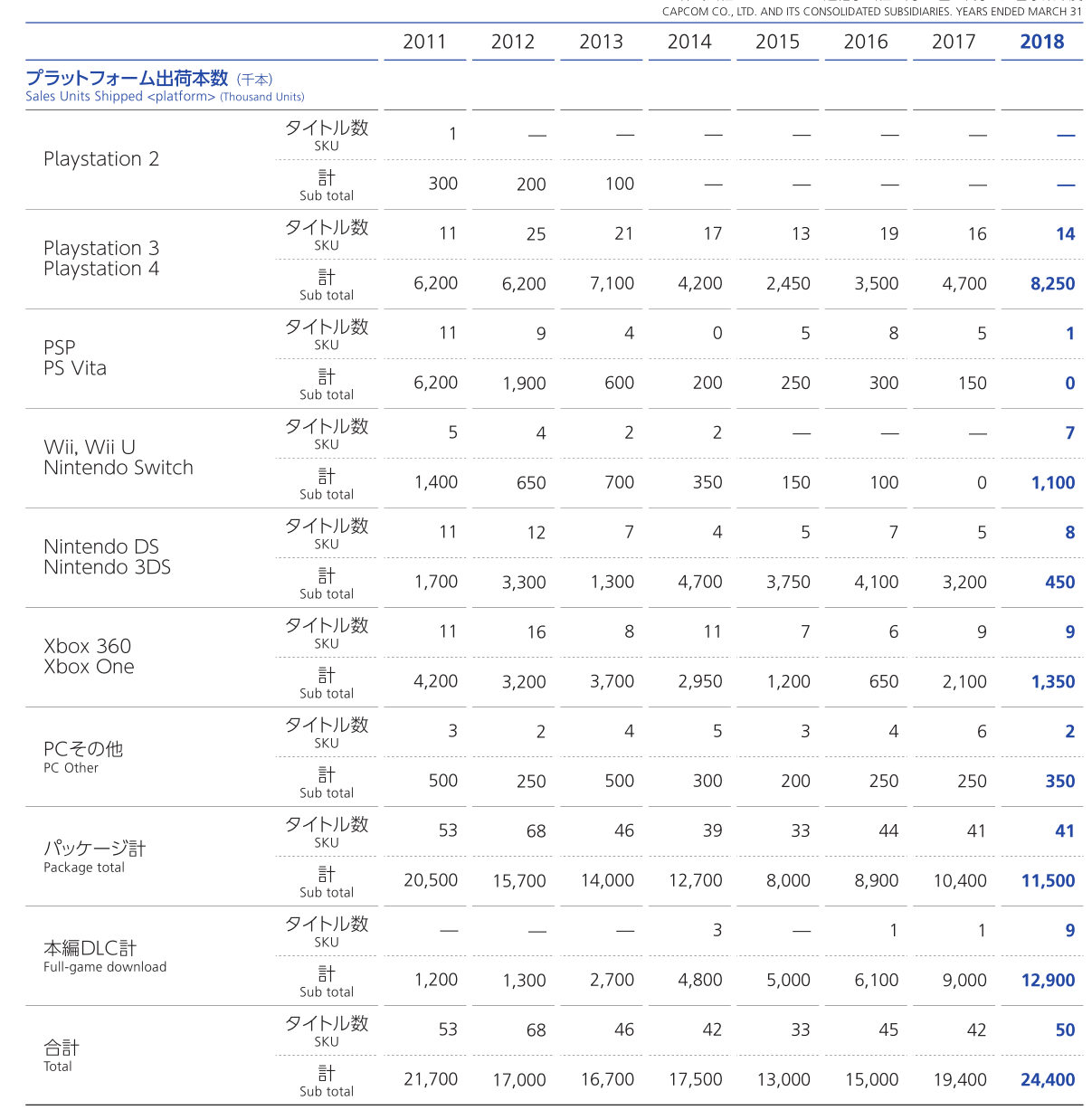 As I pointed out, Square Enix, Capcom, KT, NB, Atlus all had their best selling games of all time or franchise record breakers on Playstation. They're going to support Playstation even more considering the growth they had on PS4.

And we already see that, with Capcom, SE, NB launching a completely new IP already on PS5: Athia, Pragmata, Scarlet Nexus. None of this is going to be on SW. Neither is FF7R2, KH4, FF16, MHW2, RE8, etc

I really think 8m in Japan for PS5 is too optimistic.  Japanese people do not want first Sony first party games like Uncharted or God of War.  Spider-Man is probably the most popular first party game that they have for Japan.

Total sales for PS5 is going to largely depend on how much money Sony and/or Nintendo throw at Capcom.  If Nintendo makes Monster Hunter a Switch exclusive (unlikely), then I can see PS5 selling as low as 4m, which is a little above Wii U levels.  If Sony makes MH a PS5 exclusive (slightly more likely), then PS5 might go as high as 7m.  If MH is multiplat (most likely), then PS5 will probably end up in the 5m-6m range.  MH was really the game that helped the PSP and killed the Vita, and Sony and Nintendo might continue to make offers to Capcom to decide the fate of the home market in Japan as well.  On the other hand Sony seems to be giving up on Japan and Nintendo is already winning there without MH.  If Capcom doesn't get money thrown at them, then going multiplat with MH would be the best move.

PS5 sells somewhere in the 4m-7m range depending on MH.

If the PS5 wants to beat the PS4 sales. It needs a new exclusive IPs that is on the same level as Splatoon or Ring Fit Adventure. Even with numerous FF games, anime games and Monster Hunter it will still be finding hard to crack the 10 million zone like the PS4.

One of the biggest issues for the PS5 will be the price as Japan is pretty sensitive to that.
You either have to bring really good value (Switch) or a comperatively low price (3DS) to take off sales wise.

And without a Japan focused exclusive in the first few months and a higher entry price than PS4 the next gen will be limping out of the gate.

The only delusional one in this thread is the person blindly believing PS5 will magically inherit PS3/PS4's market share, as if the declining interest for traditional home consoles in Japan isn't already obvious.

SMTIII selling 300k isn't that hard to see however, considering SMTIV alone wasn't that far off on 3DS. SMTIII has never been on a Nintendo system, never been portable, is generally more well regarded/remembered than SMTIV, and is releasing on a system with more interest/momentum behind it than the 3DS, even if sales looks to be comparable in the region with 3DS more frontloaded.

Not only that, there is also no replacement for the PS Vita. Vita actually sold quite a bit of Software and because there is no replacement that audience has started to transition to the Switch.

Hence Playstation will have a very hard time breaking over 10M units of physical software in the coming years. Last time Playstation console sold over 10M units of physical software we saw the biggest launch on the Playstation system Monster Hunter World if we look back the last time a game has sold that much on the Playstation ecosystem it was in 2010 when Monster Hunter 3 launched on the PSP. I also don't think it's a coincidence that Software sales have slowed down on the Playstation ecosystem after the Switch was released and the Vita was no longer relevant, with no portable Sony actually abandoned around 1/3 of their audience. Playstation Vita sold 18.46M units of Software in the 5 year period, this market is mostly going to transition to Switch or disappear. This is one of the reasons I expect that the Switch to sell far more hardware the 3DS in Japan, these AA Portable publishers have dedicated audiences that once transitioned buy a lot of software.

In terms of Nintendo, we are expecting them to hit their peak year in 2020. Currently, the peak year in the past 6 is the launch of the Switch which coincided with a strong year for 3DS Hardware. I would also expect next year for Nintendo to hit >5M hardware sales.

Nintendo has also seen a drop in its software sales that can be correlated with the subpar 3rd Party support in the past three and a half years. The top-selling 3rd Party game remains Minecraft. Yo-Kai went from selling 5M units of software per year to less than 500K. The last Monster Hunter game launched on the Nintendo ecosystem was Monster Hunter XX in 2017 which sold 2M units across the two platforms. Kingdom Hearts and Final Fantasy games skipped the Switch.

Based on Animal Crossing: New Horizon launching and probably doing close to 8M sales for 2020, this year will be the highest total since 2014, it's also very likely that we would see over >25M units of software sold on the Switch. Beating 2014 will be very difficult but not out of the question.