Forums - Politics Discussion - Someone has a plan how to fight Coronavirus, but it is not the man in the White House

Well... If you can't tolerate other people having opinions... Forums in general might not be the best place for you?

Personally I don't give two shits about Trump, he has been free entertainment for years, he is a joke on the world stage.

Americans generally hear the word "socialism" and shut down all rational discussion...

Recession is the new buzz word that is happening. Interesting times, nations with universal healthcare seem extremely well positioned to handle the issue.

From a first responder perspective, all the rescue agencies I am a part of have been doing regular situational updates, the general consensus is that for the majority of the population who aren't extremely young, elderly or have immune deficiencies will be fine for the most part.

We aren't wearing compressed air breathing apparatus or hazmat suits when dealing with the public though, it won't come to that, it's been blown out of proportion by fear mongering and lack of toilet paper.

Its fucking hilarious honestly, last time i checked he was a fucking racist and over reacting for suspending travel from china like a month ago, and now when he bans travel from europe like a month later the reaction is "he didnt act fast enough!"

Trying to fucking politicize a pandemic (that started on China not even in the USA) instead of working together like we are doing in my country... im not even american and i find this shit hilarious. USA politics have become more entertaining to me than any reality show that i have ever watched.

Oh, and tell Trump to stop making it political.  Calls it a Democratic party hoax at his rallies.  Blames Obama for not having SARS-CoV-2 test kits made.

Probably someone said this. I am tired to correct people, that accuse me of hypocrisis when I say A and they say, but 'you people' said B not long ago. Although I personally never said B. That is the thing, everyone criticising Trump is the same, so if I criticize Trump I am in that moment also all other persons criticizing Trump.

If someone provokes a situation, a response to it is different than if no one in the thread called for such a comment.

If Radek thought the 'Clown' part of the thread title was inappropriate, he could have reported it. And if he wanted to call out someone, it would be the thread creator at best.
Instead he attacked a group of people, and brought up the subject of racism, misogyny and bigotry, while using an example that no one so far seems to have been able to make any sense of.
So there are several things here that provokes a response.

You shouldn't call out people of a certain opinion, if you're not prepared for them to respond.

It's not usually inappropriate to think that a public figure is a certain way. Unless it seems completely unreasonable.
For example if I said that "Shigeru Miyamoto is a pedophile because he makes kids games".

Theres no way, that Trump ever cures cancer.
If he did, Im sure he would get all the credit he derserved for such.

Think the Bernie supporters need to give it a rest. He lost 4 years ago and he lost again. Nobody is buying what he is selling.

It clearly was an example. But the point is that whatever your stance is on the guy, mainstream media will go out of their way to cast anything in a bad light or if something is good news that can’t be spun, they will give credit to someone else. It’s ratings, they give people what they want to hear. 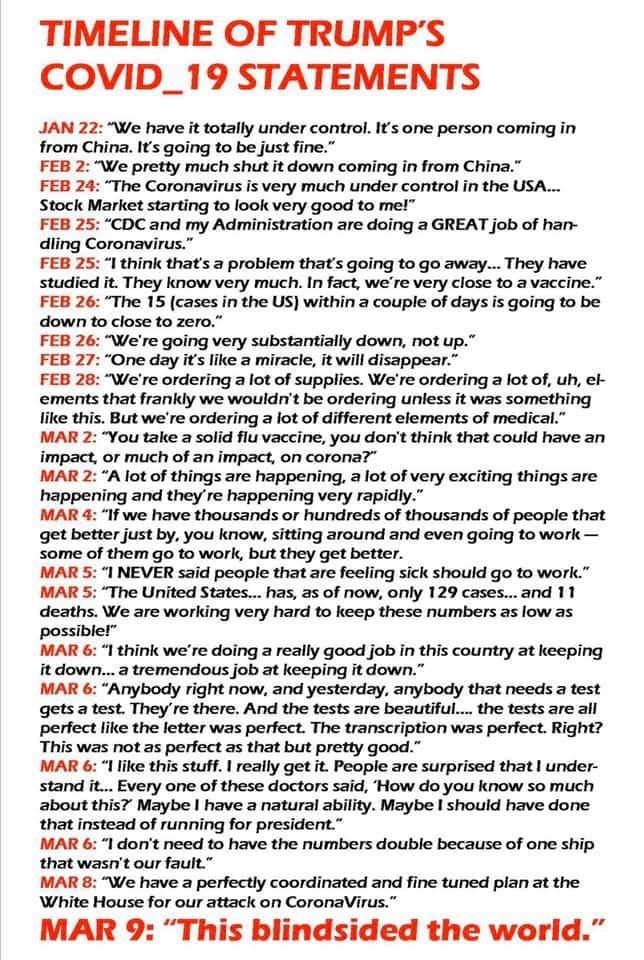 Also, we are trying to fix this.  But we've had roadblocks and irrationality put in the way several times already.

We could have been using WHO test kits this whole time but no, the Trump administration blocked them from use so that our own companies could develop their own test kits so as not to pass up an opportunity for profit.  We only learned about our first infections because some docs in Seattle broke those rules and used a test kit anyway.

Paid sick leave alone could've so much impact, as people don't intend to do stupid stuff to get others infected, but they need money to survive. So they are basically forced to do stuff that helps spreading the virus.