The rest of the world, to my knowledge, doesn't value statehood like we do in America. We are really 50 nations bonded together as one United grouping. That's how we started out as,how we were until civil war, and honestly how we still are.

We are bound to the Constitution which requires supermajority of states voting to change. States still have national guards and militias. The concept of the Senate is founded on the idea that states will perpetually have significant weight in government. Otherwise San Francisco, New York City, and Chicago would shove their liberal views down the throats of rural America with no concern for the values of the people there. Even becoming a state is extremely difficult because of how valued it is.

Uh...what?  Stop cramming political crap down ours.  Totally off topic and definitely in the wrong forum.  Thanks.

Have to say grats to him for trying. I would fail on grand scale trying to name states of any European country. I think I can name regions... Like in Germany there is the Bavarian region that produces delicious beer. Then I can go to England and name all those sex provinces Essex, Wessex, etc..

Apparently English people love sex or maybe that was the Saxons.

Almost correct with the Donut hole... except that German Donuts (aka Berliner) don't have a hole, so Donut would have been correct in a way.

Well, Americans are not necessarily much better than this, either: https://www.youtube.com/watch?v=Gj8rHX86IbA

At least she acknowledges it, too.

There probably  isn't much love for the game grumps, but they did "wheres the states" for the US, and I think something similar for Europe.  Pretty hilarious. Danny was impressive, Arin was the opposite.

To be fair, if someone gave me a map of Berlin all I could do is randomly scribble the words Berlin, Frankfurt, Hamburg, and Auschwitz. And I'm only 100% sure one of those is actually a city. OK, here is my original guesses:

1 CORRECT! 2 CORRECT! 3 CORRECT! 4 CORRECT! 5 Hamburg (swapped with Bremen, which I suspected) 6 Bremen (swapped with Hamburg, which I suspected) 7 CORRECT! (but misplaced it's capital) 8 Mecklenberg-Vorpommern (Merkelberg would be easier to remember, I think she's from there) 9 Lower Saxony (I think NRW made me think "NW") 10 North Rheinland Westphalia (swapped with Lower Saxony, largest city correct) 11 Rheinland-Palatinate (THERE'S the Palatinate! Frankfurt isn't in it, but is closest big city so 1/4 points?) 12 CORRECT! 13 Saxony (largest city correct) 14 Saxony-Anhalt (...now I Google what Anhalt means, "clue" WTF?) 15 CORRECT! 16 Thuringia (swapped with Saxony-Anhalt)

...so 7/16, or 9/16 if knowing biggest city counts. not bad for a gringo who doesn't speak german and hasn't even been to germany or europe. I knew that trying to guess without list of state names would make it harder, probably would have gotten several more with that... Still I feel lucky with Hesse, like I knew it was the name of a state, and the location felt reasonable, but wasn't really sure. (although if I had associated Frankfurt with Hesse, I probably would have screwed it up and switched them, but a win is a win...) 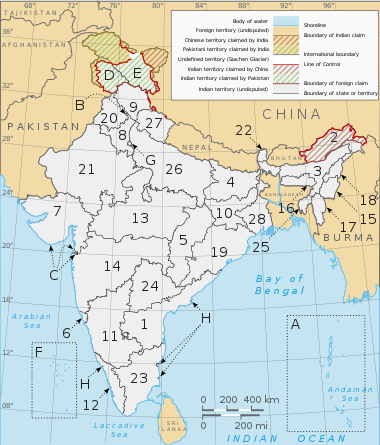 OK, here is India if anybody wants to try (NO CHEATING!) I think if you know biggest city that counts too.

You are wrong. Germany is also a federalistic state.