What??? Where are you getting this info? Not one state thinks it's okay to kill a baby after it's born. And late abortions aren't even legal.

So you don't mind the government interfering if you determine the situation is "messed up" according to what you've said. Well I agree, I think it's "messed up" that so many Americans can't afford healthcare or education or housing. The government should step in and create a safety net because what is going on is "messed up."

The military is a socialism. They have free food, healthcare, and education all paid for by our taxes and orchestrated by our government. I agree it is something we need but let's not pretend it isn't a social institution. Here are a couple of articles on the matter.

A lot of big companies actively avoid competition, because two companies taking up different areas is more profitably than competing with each other in the same areas.

Competition working requires there being a choice.  A lot of companies go out of their way to ensure they are the only choice.

Of course we can.  We choose by voting.

>Republicans and Democrats only support welfare because it gives them votes

Spoken like someone who has never experienced the great depression.  I haven't either, but when you haven't seen someone legitimately need welfare, it's a lot easier to say that it's only done to get votes.

Our country is pretty spoiled.  No one has any idea what the world was like before government welfare anymore.

"The NIH was responsible for 22 of the drugs on that list, and the University of California system came in second with 11."

NIH funding in general went toward another 200 other drugs in the past few decades.

Tons of research has been done by federally funded schools, and other government institutes.

You're talking about emergency care.  That doesn't cover most of healthcare.

Other countries have better health results than we do.

Isn't it?  Red states have a lower cost of living, but they are also on average poorer.

Democrats for example aren't a monolithic block where they all agree about policy.  Different democrats support different things.

California has had several Republican governors.  In fact most of the California's Governors in the past 60 years have been Republican.

Labor laws were a byproduct of government regulation....

In Australia I can walk into any hospital and be seen almost instantly, for free.
Our healthcare is significantly cheaper... And we get far far far better quality care, you literally don't know what you are missing out on.

The American health system is old, inefficient, expensive and ineffective from top-to-bottom... I would rather be ill in Australia than the USA.

Private Charities can also drive up inefficiencies as they try and make an extra buck for their own ends... Plus many charities tend to be religious in nature, lets remove religion from the equation wherever possible, freedom from religion, right?

The big pharmaceutical companies are just one aspect of your health systems inefficiencies, our Government dictates the pricing on medicine, companies still make a profit, patients get cheap medication... Everyone goes home happy.
And if you are worried it will cease innovation in the medicine field, it doesn't happen. - Plus the Government will invest in R&D anyway which reduces costs and keeps innovation happening.

The flip side is, you still get pharmaceutical companies competing against each other, thus capitalism is still at work.

Years ago there was a movement by some political parties here to almost "Americanize" parts of our healthcare system... It was a political shit storm... For good reason as it would be a regression on all fronts.
Fact is the vast majority of the western world have proven that a universal healthcare system is the way forward, the way to go to provide higher quality and cheaper care.

Nurses and doctors will do a quick assessment of a patient to gauge how urgent a patients needs are and go from there... Often if it's just a small issue, they will tell them to go to a private clinic instead. (We have one next to the hospital here.)

It was mostly left-wing socialist "unions" who made the push to 8 hour work days...
Socialism, Capitalism... None of it is intrinsically a bad thing, most western nations have found a really good balance between the two and have made some great strides. (I.E. Large swathes of Europe and Oceania.)

It's when either gets taken to far/extreme that issues really start to crop up as there are Pro's and Con's to each approach. 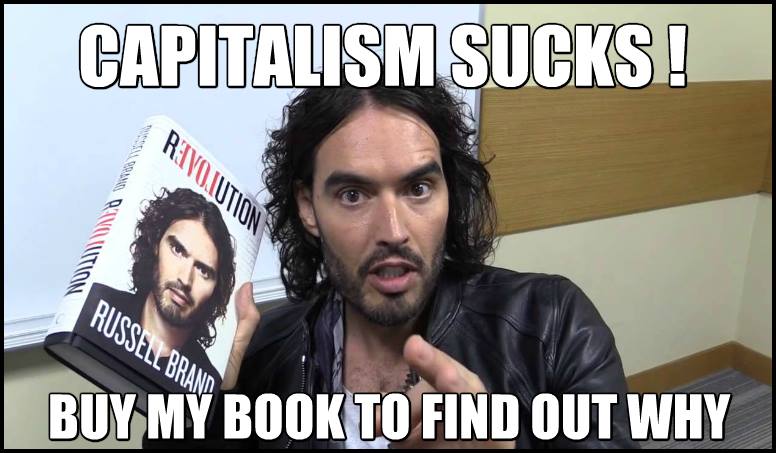 My first post wasn't an explanation.  It was a criticism of the video.

Correct there are no time stamps in the video.  But you can line up the representation of technology.  And even if you disagree, the technology wasn't the point of my criticism.

A.)  That the person who makes the complaints in the video is a small minority.  I bring this up, because some right wingers tend to think of liberals being socialists (the creator of the YouTube channel is no exception), despite that being very incorrect.

B.)  That good things can still be criticized.

In other words, just because people's lives are constantly improving doesn't mean that the mechanism behind that improvement can't be criticized.

FreedomToons tends to make videos mocking liberals, or rather what they think liberals are.  This one is another such video, you can tell because it starts by someone criticizing capitalism.

If the video didn't start out that way, and it wasn't made by freedomtoons, your slightly different explanation would make more sense.

That's just flat out ridiculous.  The list of technology that derived from NASA alone is damn amazing, not to mention all the work that's been made possible by grants and public funding.

Republicans actually like to spend more money then most Democrats they just like to spend most of their money on stuff that benefits very few people like the military industrial complex and endless wars.

Thats the core of my issue with the argument. In Canada, everybody has to wait a bit for certain procedures. In America, we just make sure that the poor simply can't get certain procedures done so the rich don't have to wait. Sure, wait times are better in the US, but which is honestly a more just system?

No small wonder since most Americans can't afford to go visit a doctor nearly as often as one does in the rest of the world. Going sick to work rather to the doctor because either you can't afford the doctor or not having enough sick leave anymore/saving sick leave for later that year is something most non-Americans only have WTF as their reaction. And even then, the difference in waiting times is in most cases negligible.

The price for commodities has nothing at all to do with this. That's false causality.

Laser eye surgery went down a lot in price worldwide to to technological advancements, not due to any government involvement. Or why do you think my mother's bill in Luxembourg was projected as 12000€ 11 years ago (It wasn't covered yet at the time, so she refused to go through with it), but when she went last year (coverage began in 2015 iirc), it only cost 1800€, over 80% less expensive - and she got her money back from the health ministry.

(For reference, you generally pay in advance here in Luxembourg and get your money, or part of it, back. Operations and Rehabilitation are fully covered and generally paid directly by the health ministry, Antibiotics by 80%, normal Painkillers 60%, other medicines which are proven to work at least a bit 20-80%, Vitamins and the like without any therapeutic proofs are not covered at all. Private Insurance companies do exist and they can offer to bring additional coverage, but except for dental prosthetics (100% coverage instead of 60%), these are very seldom used)