Agreed here, $599 was an absurd price to release a console in 2006 and telling people to get a second job was pouring gas on the fire.

I was talking about the console itself.  If we are going to talk about price point, once again MS dropped the ball.  You can claim that had MS priced more competitively and did not make the X1 a PR nightmare that the PS4 would have still sold more, but you have zero evidence to back it up.  For the majority of its first two years it got mostly cross gen games and had no major exclusives until Bloodborne over two years later.  This is something that has been proven true by even Sony fans calling it the indie station 4 and what not.

What is also fact is that before the X1 reveal, the majority of people on the net were more hyped about the next XBox than they were for the PS4.  Once MS botched the reveal, and in turn the launch, it was only then that the tide would eventually shift in favor of the PS4.

I am not saying the PS4 would do worse than PS3, but I am saying the X1 would have heavily cut into its sales.  But due to the competition shooting themselves in the foot, the race was over before it began, making it extremely easy to sell as well as it did.

At the end of the day, Switch is selling great and PS4 is selling great.  All this pointless debate of why or who had it easier is dragging on way longer than it needs to, so unless someone can actually give me decent point worth debating, I am done diving down this rabbit hole any further.

So a decent/excellent PR launch for the XBO (and Wii U...ill get to that on my next post) would account for up to 15-20 million less PS4's being sold?!  The base XBO would still have the very major problem of being technically inferior to the base PS4 (900p vs 1080p in most early games...and still to this day)...those predate any PR reveal.  Are you saying that the buying public would have opted for a less powerful machine despite the same price?

Also where would the gains happen at the expense of the PS4?  Europe, Middle East, Africa, Central/South America, Mexico, Canada, AsiaxJapan, Japan?  I think a better proposition PS4 would outsell a better proposition XBO any day in those territories and given that the XBO wasn't even available in many of those countries at launch (is that part of the PR problem as well?), the PS4 would have the upper hand anyway.

So that leaves the US.  the 20M unit gap for the Xbox360/PS3 made sense, the PS3 was poorly received and never fully recovered...but if we are talking about good reveals for both, is that number still 20 million?  The Xbox 360 had a major second wind with Kinect, would the same be said for the One?  There are lots of variables besides launches that count towards that final number.

People post here often that a better PR/received XBO and Wii U would mean lower PS4 sales and never quantify it.  My first reaction is that the better outcomes of both would have amounted to something insignificant because a better proposition for the PS4 means it would sell more on that merit alone, greater than the impact of its competition doing well.

If it resulted in 15-20 million higher XBO sales than yes I do believe so. The always online, no used games, Kinect required, TV focus, "2nd tier" countries, $499 price tag, etc resulted in huge backlash for XBO. These things didnt just make XBO less appealing, they also made the "games first" message from Sony look like some forward thinking, pro-consumer stance when it would have just been seen as the standard, logical focus if Microsoft didnt make all those strange blunders.

The sales would have came from a bit of everywhere. US+UK sales are ~30m vs ~35m in PS4 favor, these countries were very pro-Xbox last generation so without the massive blunders than perhaps it would be switched with the slight lead going in XBO favor.

As for other places, I fully agree that PS4 would still dominate but XBO would be closer. Outside of US/UK sales are ~12m vs ~58m in PS4 favor. Perhaps that would be closer to 20m vs 50m. Still a very dominate performance from PS4.

No I dont think a 2nd wind like 360 had would take place which is why I'm guessing ~70m lifetime rather than the ~85m that 360 did. And yes there are more variables than launch but major launch mistakes many times will stick with you for the whole generation. It's a snowball affect where once people think one is the superior choice than it just continues to escalate and fixing your mistakes only helps soften the blow rather than reverse the trend.

Personally, I think there are other factors that should be taken into consideration for the Switch, not those. Such as the PS4 having less competition than the Switch. Before anyone jumps the gun, here is my reasoning.

The Wii U (Which was $299.99 and $349.99) was a complete failure immediately after launch. So much so that last generation systems began outselling it back in early 2013. Second, the Xbox One had a completely botched launch and also sold for $499.99 initially. The Xbox One was also weaker than the PS4, so both the Wii U and Xbox One were less appealing than the PS4 overall. So the PS4 was both A) Cheaper than the direct competition of Xbox and B) More powerful than all the other consoles.

Meanwhile, The Switch has had to contend with the PS4's best selling year since launch, as well as new product launches (Xbox One X). Not to mention consoles that are both more powerful than it but selling for cheaper (Xbox One S regularly goes down to $200, and PS4 is often $250. Switch is $299.99). Even 2018 was better sales wise for PS4 than 2014, 2015, or 2016. The Switch is neither the cheapest console, nor the most powerful. Nor does it have the benefit of being the most appealing in an objective manner. The only benefit it has is being "new" which, as history shows, isn't always enough, and yet...it's still selling fantastically.

X1 sells about half of PS4 (even more when considering first 2 years) and have been very close in USA in that period. So I wouldn't call that a weak competition.

3DS had a much weaker competition on PSVita (which sold about as much as WiiU) and even being more time in the market, having more models and being much cheaper sold less than PS4.

Theres some truth to this.
Old picture showcaseing the fact that Xbox had a slightly stronger 2013-2014: 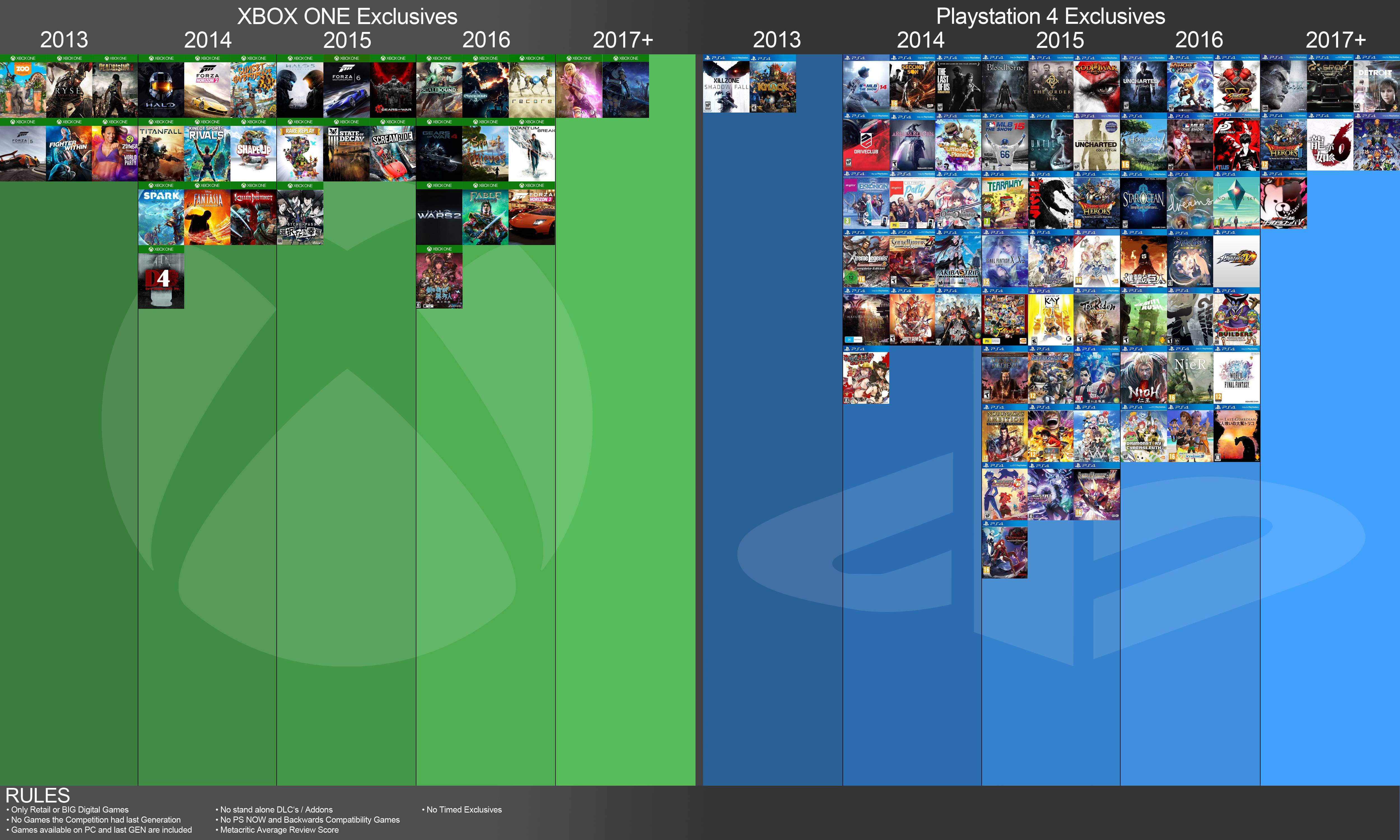 By today in 2019, the differnce in exclusives though is huge.

When was the WiiU ever selling decently?  It exited it's first holiday season with over 2 million sales and only managed to add another 1.5 million by the following holiday season.  And that was with nothing to contend with but an 8 year old Xbox 360 and a 7 year old PS3.

I bought my WiiU at launch and got a great deal of enjoyment out of it.  But, I don't disillusion myself into thinking that it didn't flop hard out of the gate.

i think we will see in the future other (different) switch models too, so it will be the same

Oh absolutely, Sony offers way more now, not even close.  And the quality is way higher as well.  There is a reason my X1 is even less played than my WiiU lol.