Hmmm, I don't know, I think it's too early to say at this point.

It does seem to be happening more often that with certain types of games, like Dark Souls or Valkyria Chronicles 4, the Xbox is a distant third to Switch and Playstation in sales. Maybe Xbone owners just aren't that into Japanese games? But then even some non-Japanese games like Crash Bandicoot and LA Noire have done better on Switch than Xbox.

A lot of indie games already seem to do the PS4-PC-Switch thing and leave Xbone out.

These figures are disgusting. I played Fifa 18 last year on Switch and PES 2018 this week on my new One X. Verdict: No matter on which console, PES is still miles ahead in gameplay (as it was already 10 years ago), but the Fifa franchise with its unrealistic gameplay wins every year as EA have their hands exclusively on all worldwide league licenses. I wished all league licenses would go to Konami, the Japanese are soo much better at creating football (soccer) games than the undeserved near-monopolist EA Canada.

I guess that explains why it got such a sharp discount for Black Friday.  It may have decent legs through the holidays if it keeps the discount, as kids seem to be interested in it (well mine are, anyways).

The toys to life thing hurt it I reckon, that craze is over, it would've done really well in say 2012.

That platform split though:

Not really surprising I suppose, the Starfox content seems be the main reason anyone would care about it.

This is the type of week that makes me sad with games I don't like getting the top and with much much much more sales than the ones I like. But that is part of the industry and keep up the high HW numbers and opportunities for other games.

CoD and Fifa continues to be juggernaughts until the end of times.$$$

Starlink wont see a sequel, Soul Calibur sales continues to decline and Dark Souls on the Switch really did pretty good after all.

Black Friday week will be fun 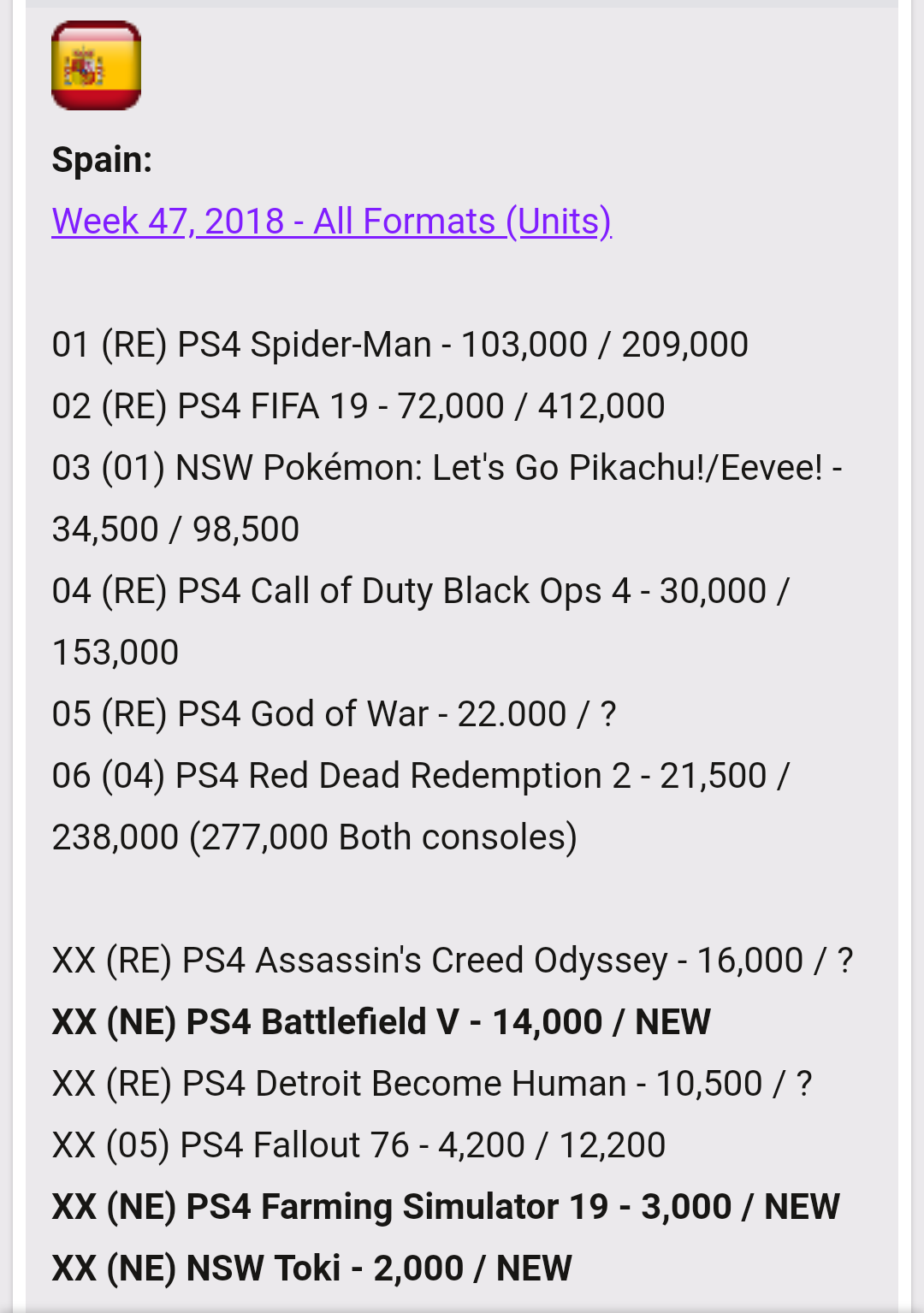 Where did you get that figures from??

I buy all my games on physical, VR included.

I play a game at a time so I don't bother with swapping discs.

Only buy digital if the discount is tremendous and I don't care about the game much.

It is completely fine. Nothing super big, but nothing bad too. It avoids the glitches many Ubisoft games have. And the planet traversal, fighting and exploring works pretty well. It's a solid games at mid-level, like say warriors (Meta is also similar to Warriors games). The bad sales are undeserved.

Indeed the toy to life thing may have hurt it. Although you can completely play through without anything extra.

I wish though, they would handle it more in-game in future. I think you could your in-game currency electrum (which you start to amass anyways without a real way to spend it all) to temporarily unlock stuff, which you would permanently unlock with the toy or the digital DLC. This would give a good in-game mechanic and still something to sell the toy or DLC for.

Yeah, well people like different things, and if you are different to the masses, you might see yourself in a minority in purchasing patterns. But I accepted my otherness years ago, and now feel empowered to not be like others. Even if it for something as simple as taste in gaming.