Yeah, I think the maker of the video had incomplete datasets. Germany jumping in at second place shows that clearly, and Soviet Union should as you point out at least for some time have inhabited the TOP 10.

The countries measure their economy in their own currency. Which makes international comparisons pretty hard. The video assumes exchange values between the currencies and translates it into Dollar. As Dollar is still the international leading currency, pretty much every other currency is undervalued to the Dollar, which in turn makes the US economy look bigger in comparison. Notice how China is jumping in the last years in the video. That doesn't mean China had suddenly crazy economic growht (they actually had more economic growth in the 80s than the 2000s I think), but the Yuan became stronger valued in comparison to the Dollar, so the economy grew stronger if measured in Dollar. PPP is a way to measure currencies values independently of exchange values. It says pretty much: how much money in the currency I need to buy a given set of products. As Dollar is overvalued in exchange rates, other currencies usually look much better in value if you apply the PPP. And that leads to the result, that based on PPP China is the leading economy for some years now.

I know what PPP is.  What I'm saying is that we don't use PPP for this purpose.  PPP is used for standardizing the value of the (in this case) dollar over time.  If you apply PPP here, it doesn't change the action of the graph shown in the video. 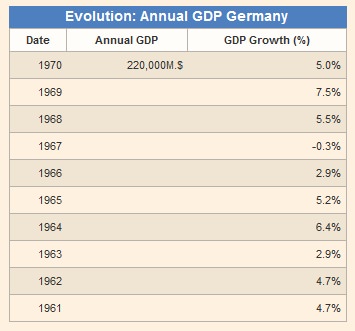 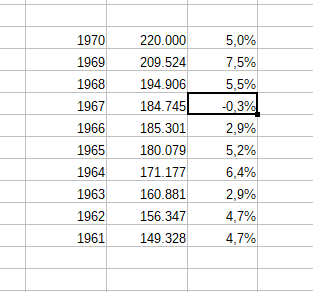 That should put Germany's rank above France and UK in the Sixties and on third place below USA and the Soviet union in that decade (if the data of the other countries is correct).

No, if you say it is for equalling dollar over time and say it doesn't change anything in the video, you don't understand what PPP means. Let's say for one dollar you get at your bank 10 yuan (it currently is probably less, but whatever). But for one dollar you can buy at McDonalds in the US say one burger, but with 10 Yuan you can buy at McDonalds in Beijing say 3 burgers. So the exchange course actually undervalues the yuan three times. As the economy of each country is working with said countries currency in that case exchange course makes the US economy bigger in comparison to chinas. Therefore in the PPP-list of economies china has overtook the US for quite some time and India is ahead of Japan, the UK and germany, in difference to the order if you calculate the GDP according to exchange rates as the video did. Look at the two links, the order is quite different.

Thanks for your calculation. It is not completely correct, as germans GDP is measured (at that time) in DM (Deutsche Mark), not US-dollar. But I don't expect strong currency fluctuations in that time frame between dollar and DM, therefore it should be in the right ballpark.

And the song is always funny.

I understand what you're saying now.  I've never seen PPP used in that way though.  PPP, as I've always known it to be used, is for standardizing over time.  In other words, if a McD's burger cost 10 cents in 1950, but it costs a dollar now, we use PPP to determine that a person with $5 in 1950 can buy as much as a person with $50 today.

With all of that said, I'd take issue with a comparison of GDPs that uses PPP in the way you mention.  Because, as a country's GDP rises, the purchasing power of a person in that country typically decreases relative to a person in another country (this is caused by many factors, but a major one is increasing regulation), assuming we're working with a standardized currency.  So, I can't see how we'd be able to gain an accurate understanding of anything by watching a video like this one, if it used PPP in the way you mention. It would skew toward poorer countries.

Would have been more interesting if it went further back in time.

Damn, US kills everyone while we keep employee pay stagnant and CEO pay keeps exploding. Didn’t realize we’re so far ahead of the rest of the world.

Yeah, I’d love to see the impact free labor had on the US economy.