Forums - Nintendo Discussion - Why was FFVIII left behind??

Most likely, they'll want to release a remaster of the game.

The game released on Steam in 2013 with “Eyes on Me” intact, based on the original PC version. And the game is still sold on the PS3 PSN store, etc.

The idea that it’s a copyright issue seems like a baseless kneejerk reaction to trying to figure out why FF8 hasn't been Remastered yet, rather than Square Enix simply not getting to that one yet. When licenses expire, games get pulled from the stores. Regardless of whether they are the original versions or remasters. Capcom for example were not allowed to sell Marvel vs Capcom 3 in any online store once their license expired, so it was removed from all stores.

Final Fantasy 9 and 12 just got an HD release/remaster last year. It's a bit too soon to conclude that they're actively avoiding FF8. If one of the mainline 3D Final Fantasy games had to be left for last, I would have presumed it to be FF8 anyway. In spite of it being my favorite FF game, it seemed to be the most polarizing FF game, along with Final Fantasy 13.

As for whether or not they have the source code for the game, they can publish a game based on just the ROM, so I'm not sure. Though I hear they usually don’t have the source code for older games. However, that didn't stop them from giving Final Fantasy 7 and Final Fantasy 9 the HD treatment, so whatever they did for those games should be possible for FF8 as well. Even if it’s reverse engineering a ROM of the game like they did with Kingdom Hearts.

The steam version is essentially the same version with some adjustments on the same platform PC, the PSN versions are redistributed emulated PS1 titles these aren't new ports on new platforms they're repackaging of the same initial release, this is the debate on the legal issue because the copyright belongs to another entity possibly EMI, the agreement they had for the song may allow the initial release to be redistributed but in order to do other versions they'd likely have to renegotiate with the copyright owners and the owners likely would want a good chunk of the pie.

maybe, or they have even some bigger plans for this game, i can dream...😉

Hey now, I'm totally down for that

Huh? Why on earth would they not have the source code of their own game anymore?

Yeah. Though I'm not sure some of those adjustment that were made to the Steam version of Final Fantasy VIII, such as higher native resolution, and "Magic Booster", which allows you to alter your character's inventory of certain spells (rather than dealing with the Draw function), wouldn't qualify it as a port in a similar manner. 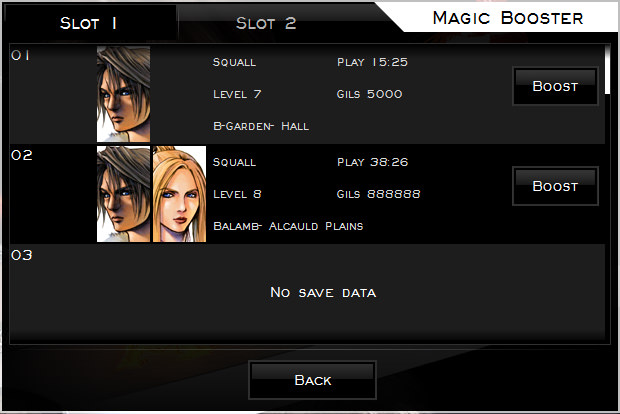 But that's debatable. The PS4 versions of FF7 and FF9 certainly did more. I'm not sure where the line is drawn. Either way, there are known examples of original releases of games that have been pulled from all stores due to licenses expiring. While it may be possible that the license for a particular song would never expire for the original version of the game, but would for a version that changes something specific about the game, I don't know if we have any prior examples of that, or any particular reason to think that is the case here over the idea that they just didn't get to FF8 yet as they're not doing these in any particular order. Nor has there been a long hiatus since the last one.

I think some more time needs to pass before it would seem like there's some problem with FF8.
Though they could have surely released the game on console with just higher resolution if they wanted to, since Steam was allowed to have that improvement over the original PC version. The fact that they haven't may suggest they want to do a bit more than that.
Or maybe they just didn't get to FF8 yet on their list of priorities.

The anniversary idea makes sense to me.

let's see, maybe SE has still some surprise for tgs