Forums - Nintendo Discussion - Why was FFVIII left behind??

Do you really need more Final Fantasy love right now :D the Direct announced 9 different FF games coming in the next 12 months or so, gonna be FF overload, Squall and co can join the rest of the games later on, like others said when it's been ported to mobile they'll probably just add a Switch port down the line of it too, the junctioning and refine system of FFVIII was one of my own fav games on the PSone as well, I didn't get the dislike that the got from some fans, I think people at the time might have been just disappointed that it wasn't a direct Sequel to FFVII which so many loved.

Does remind me of this though.... always makes me chuckle. 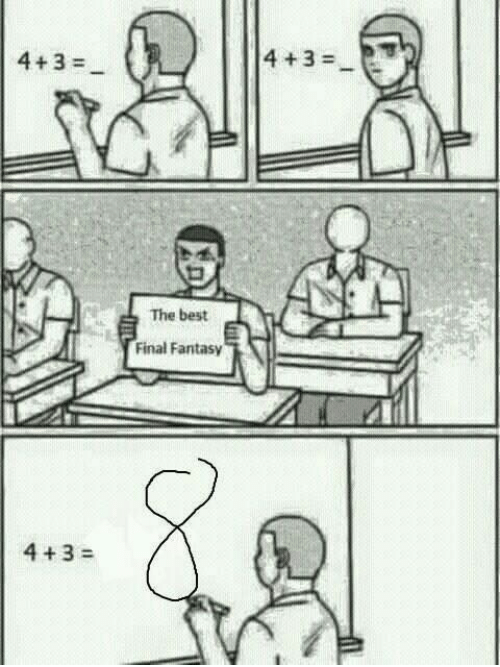 The game will come soon, if VII made it VIII will too. They probably release it alongside the other versions.

Square should just pay up, they'll make your money back in no time!!

Steam version is an adjusted version of the PC version so they still have the source code it's very likely just down to the copyright issue as VIII is the only FF to not even be remastered in anyway.

FF8 is also my favourite in the whole franchise, like FF7 before it, it really opened up the vision of what an RPG could be with such a beautiful world and breaking the mould with an extensive crafting system for magic and weapons, worldwide mini games, and side-dialogue (such as Selphie’s Blog... made years before blogging was ever a thing) that gave different perspectives on everything happening, then you had Garden as your HUB which would evolve based on the story and different tasks you’d do.

Final Fantasy 8 is one of my favourite games of all time... though 7 is fairly close behind =)

There is also Xenogears, which I liked even more than Final Fantasy 8 (and any Final Fantasy), Chrono Trigger, Final Fantasy 6 and Tactics which didn’t make the cut. Though I think it has more to do with what Square has ready, and expect all these games in the future.

They released it on PSN for PS3, PSP and Vita so that isn't an issue.

Those games are running on emulators...