It's interesting how the only ones suspected of having empathy for suppressed minorities these days are "lefties".
Care for caged children separated from their families? Well they're immigrants, so you gotta be a lefty.

Anyway, if Arabic was just removed as a national language, I wouldn't compare it to apartheid. That's quite an unfair comparison.
Though there are certainly a lot of concerning things going on in Israel to say the least in terms of human rights violations.
But because Israel is such an important strategic location for US military, they're going to let Israel get away with a lot.

Thats not even remotely true. Israel also need to do their part. That being said, I don´t really believe that the situation will be solved in foreseeable future or if its solved, then it will be pretty much good bye palestine.

Strange to see all these distorted views on Israel. I don´t see how anyone can honestly defend Israels actions and complaining about other countries that also do something wrong is not helping. If Lebanon does something bad it does not magically make it okay for Israel to do something bad. All countries should be criticised for thr bad things that they do, it should be made clear that they should change their policies for the better.

And whats that "leftists" hate jews talk? At least here in Finland and for example in Russia, its the conservative far-right nationalists that adore Hitler and hate jews, although most of finns of course condemn Israels actions, they are not in no way anti-jew.

"So with Israel declaring itself pretty much exclusively "Jewish" and banning Arabic it is now at the forefront of being apartheid."

Sounds like Northern Ireland. Claiming to be british and not allowing the ancient gaelic language which is still spoken by a few hundred thousand to be officially recognised. All because they feel it threatens their Britishness.

Many Irish people and eventceltic fans fly the Palestinian flag because they can relate to their struggle.

The issue is the seemingly disproportionate attention placed on Israel.  I get that two wrongs don't make a right, but one does have to question why Israel making hebrew the official language is so offensive when over in Saudi Arabia non-muslims are not allowed to hold citizenship, and blasphemy against Islam is punishable by death.

Israel is a terrorist state how in the hell do they get away with everything they do. Google USS liberty and many others there a diagrace

The left didn't care about illegal immigrant children being separated from their parents while obama was in office and alot of those pics being used by the media of kids in dog cages were taken then. The left didn't care until it was a convenient political club to hit Trump with. Feigning empathy for political points is lefty. 😂

I'm sure most would, it was just that a lot of people probably weren't aware of it then. I had never heard of it either, until recently. And some people I talked to still hadn't heard of it until I mentioned it to them myself. It was certainly not a worldwide scandal featured prominently, like this one. Or got on the cover of Time Magazine. Etc. (Although it should have gotten more media coverage back then, as with many other stories.) 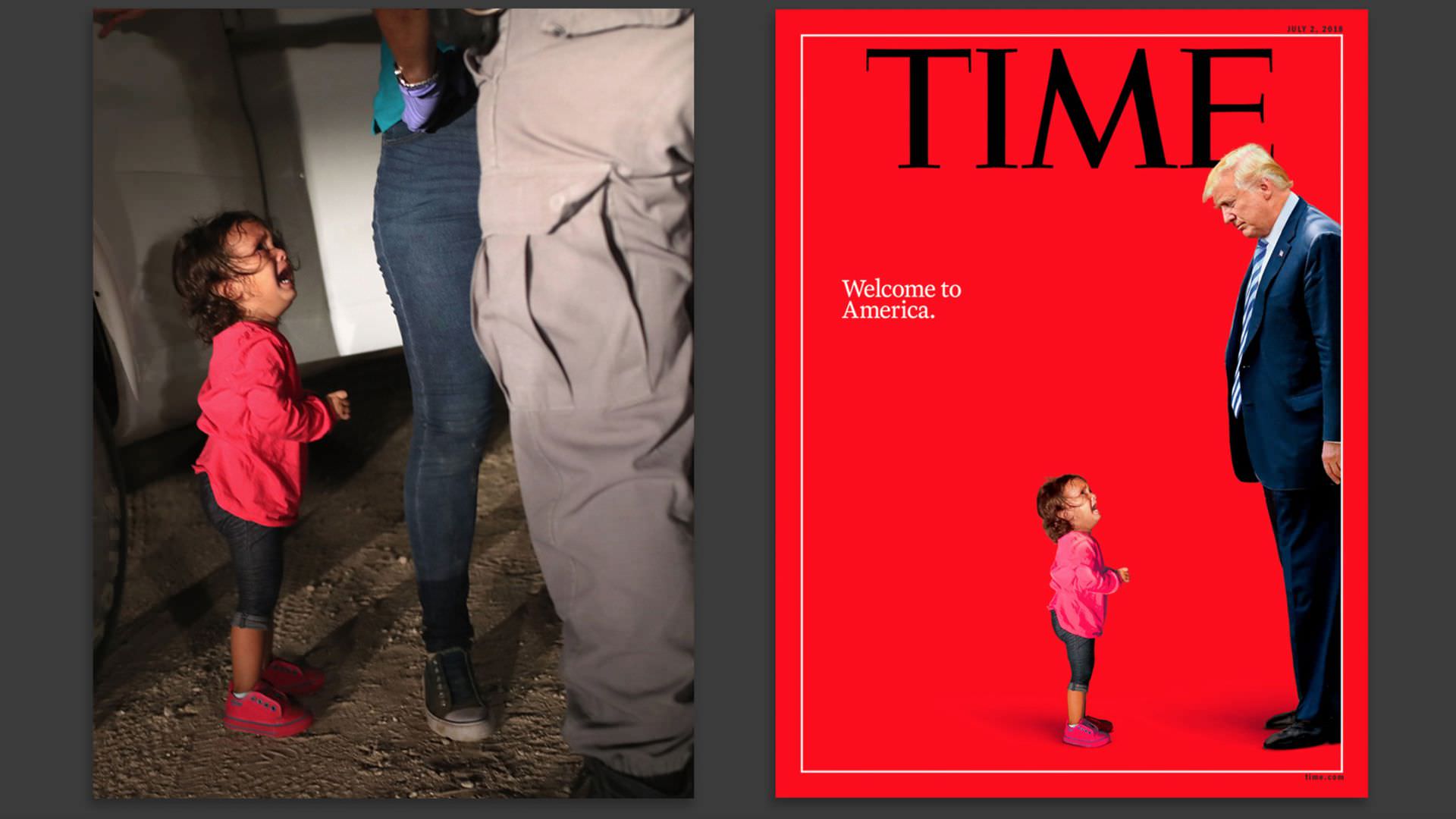 Progressives commonly criticized Obama (because they don't like politicians who serve their corporate donors), especially when it involved human rights issues.

It has really become a very frequent thing that whenever anyone empathizes with oppressed minorities, or condemn racist behavior, in particular if the offender is in the majority, they're commonly assumed to be "lefties". And it's actually very telling of those people's mindset if they can't fathom right wingers just as commonly empathizing with people unless they're of "their kind" or on their side politically.
When minorities behave in racist or oppressive manners towards white people, we don't commonly see the backlash being attributed to "right wingers". Yet when the reverse happen, almost without fail, you get the "lefties" comments quite commonly, on this forum included. This topic included.

In my entire history on this forum, I've never once made a "right wingers?" presumption like that pertaining to criticism of minorities vs majorities, or in any situation actually. Because that would say much more about my mindset than theirs. Because we don't actually know the political background of any hypothetical people, nor their mindset. But then we would know that I only expect empathy for minorities, or those who are weaker, to commonly come from a specific political spectrum.

And the idea that right wingers are so unlikely to sympathize with this situation that someone can't even fathom criticism coming from anywhere but the left, is frankly an idea that I haven't come to fully accept.
I never thought of such things as Right vs Left. It wasn't until I started seeing a lot of these "lefties?" presumptions in recent years that I started to consider that some view it that way.

Its the direction thats most important. Saudi Arabia just gave women the right to drive cars, of course there are countles other things that they should also change, but at least they are changing for the better not for worse, which seems to be the case with Israel. Also Israel is often kind of paired with western countries and with that, one might expect more from Israel than from for example Iran. Turkey has now been also heavily critiqued for its actions that have taken it to the wrong direction, same goes for Poland and Russia. The fact that many seem to blindly defend Israel seemingly just because its the holy Jewish nation that god promised to jews or something, makes the opposition more aggrevated.

If you actually look at when violence has broken out between Jews and Arabs in the small strip of land between the Jordan River and the Mediterranean Sea and what set off those rounds of violence, it becomes clear that land and settlements is not the issue. The 1929 attacks on Jews, including the massacre of the ancient Jewish community of Hebron, was precipitated by a false claim that Jews were attempting to destroy the Al Aqsa Mosque - the 'proof' being that Jews were setting up benches by the Western Wall. The Second Intifada, while pre-planned, used Ariel Sharon's pre-arranged visit to the Temple Mount as an excuse. The so-called knife-intifada of 2015 was caused by the Palestinian Authority's condemnation of the growing number of Jews visiting the Temple Mount. Abbas' exact words: "“Al-Aksa is ours and so is the Church of the Holy Sepulchre. They have no right to desecrate them with their filthy feet. We won’t allow them to do so and we will do whatever we can to defend Jerusalem." Last year Israel installed metal detectors at the entrances to the Temple Mount after terrorists smuggled guns into the compound and used them to kill 2 Druze policemen. The PA and Arab religious leaders used the metal detectors to forment more violence, riots, and murder until the metal detectors were removed. Trump recognizes part of Jerusalem as the capital of Israel while going out of his way to leave the door open for part of Jerusalem to become the capital of Palestine, and the PA and Hamas forment riots. Jews walk on the Temple Mount, and Arab media says that 'radical settlers storm Al Aqsa Mosque' even though not one Jew set foot in the Mosque. A Jew dares to say 'The Lord is my Shepard I shall not want" on the Temple Mount and Arab media accuse 'radical settlers' of carrying out nefarious "Talmudic rituals" - and the Jew is likely to be arrested just for reciting a single verse from a Psalm.

Settlements don't cause such violence. No building announcement ever set off mass riots and terror attacks the way Jews attempting to pray at the holiest site in Judiasm or asserting their rights does. There is a fundamental issue in which Jews are seen as inferior to Muslims and to Christians, and therefore when they assert that they have rights beyond what is granted to Dhimmis, such as the right to pray on the Temple Mount or at the Western Wall, for instance, that is an affront that must be corrected. It's closer to the violent reaction many southern racists had to African Americans asserting that they had the right to sit at the front of the bus or eat in the same restaurants as white people than it is a fight against oppression or loss of land other than the shame of it being the lowly Jews who control land which Muslims controlled for over 1,000 years. If it was a major European power or the US or Russia it would be one thing, but for the Jews to build their own state in the Middle East is an affront to the natural order in which Jews are at the bottom and that must be corrected.