I don't think so. You'd need several thousands of units to make it up to the list.

GPUs are in "other" until they reach 0.15%. So with little steps it finally reached that threshhold:

GPUs also disappear from the "all video cards" list when they fall under that threshhold... but if they ever reached these 0.15%, they still show up in the DX12-systems list. And since most GPUs are DX12-compatible, thats close enough to still track them, f.e. the AMD Fury series or the GTX 780 and 780 Ti. I mark these in italic in my Excel table:

Oh, and my new PC got surveyed today for next months data:

(and yes, that 66 TB storage are correct)

I see, thanks for the explanation. It's not often that a mobile chip manages to cross that threshold.

Valve has updated the Steam hardware survey with December numbers: 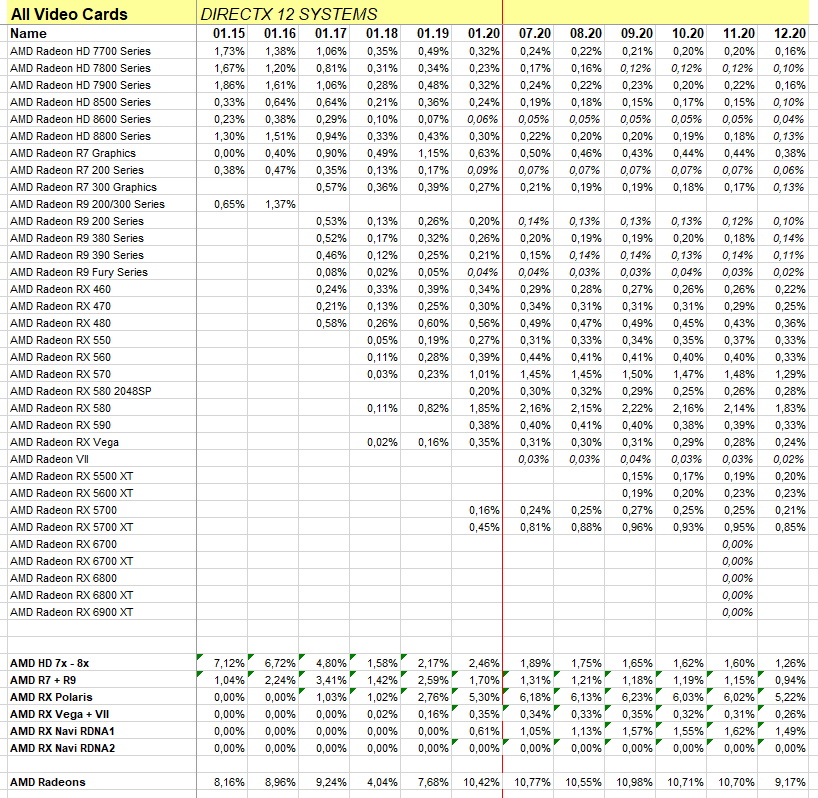 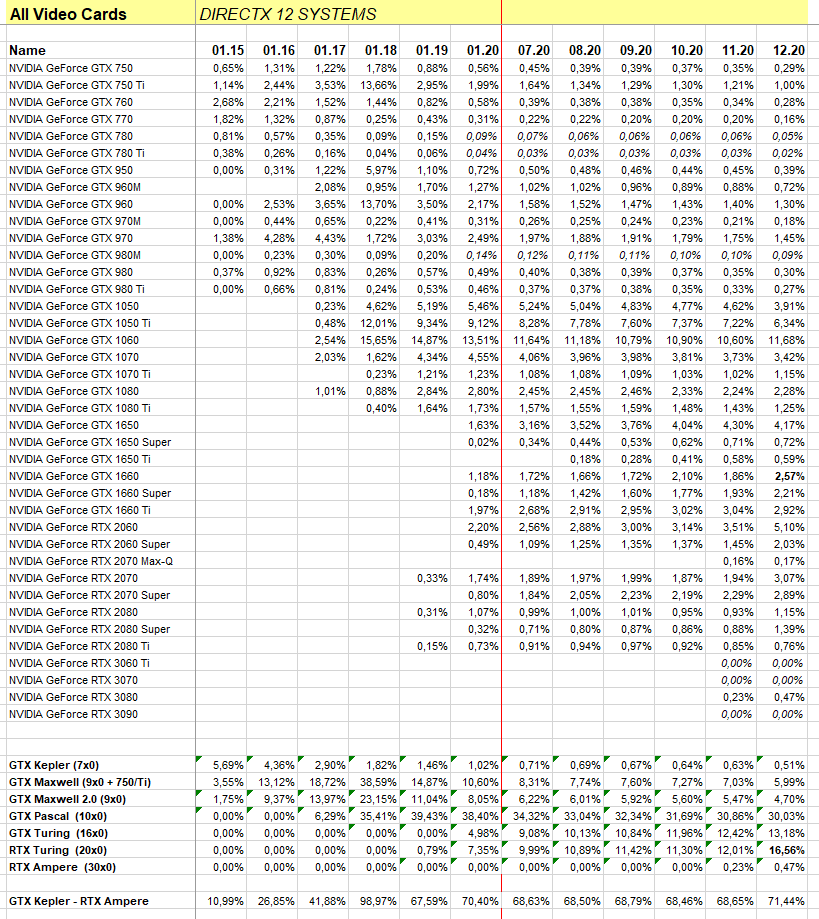 As you can see, huge gains for RTX Turing GPUs, RTX 3080 also doubled the percentage, but no other Ampere or RDNA2 cards yet in the statistic.

The gain of the RTX20x0-GPUs in itself ain't surprising:

- due to many new PC game releases in October - December with higher hardware requirements many PC gamers want to upgrade their systems
- due to the colder season and Corona lockdowns more PC gamers have to stay at home
- due to canceled vacations many also have money to spent for home entertainment instead for travelling/cinema/theatre...
- more and more PC games support raytracing, so for RT-interested gamers the options are RTX Turing, RTX Ampere and Big Navi (RDNA2)
- most RTX Ampere and RDNA2 graphic cards are out of stock or currently overpriced
- RTX Turing cards are available and their prices have fallen since the Ampere/RDNA2 price announcements 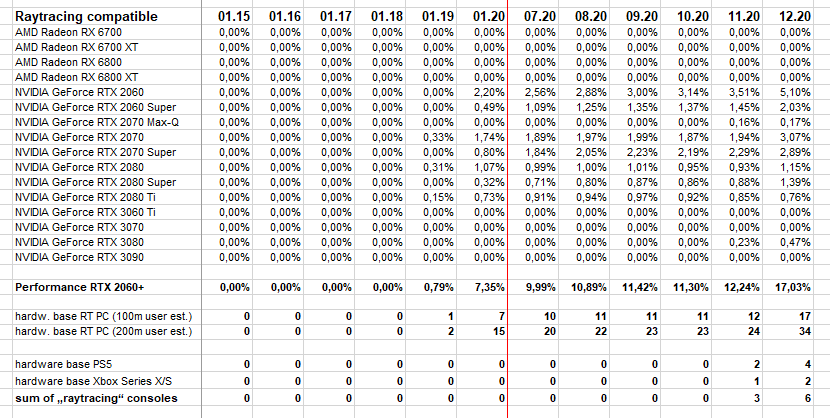 If the RDNA2 and other Ampere cards were already visible in the hardware survey, 20% RT-compatibility (so 20 - 40 million PCs) are probable. Just take a look in this data: 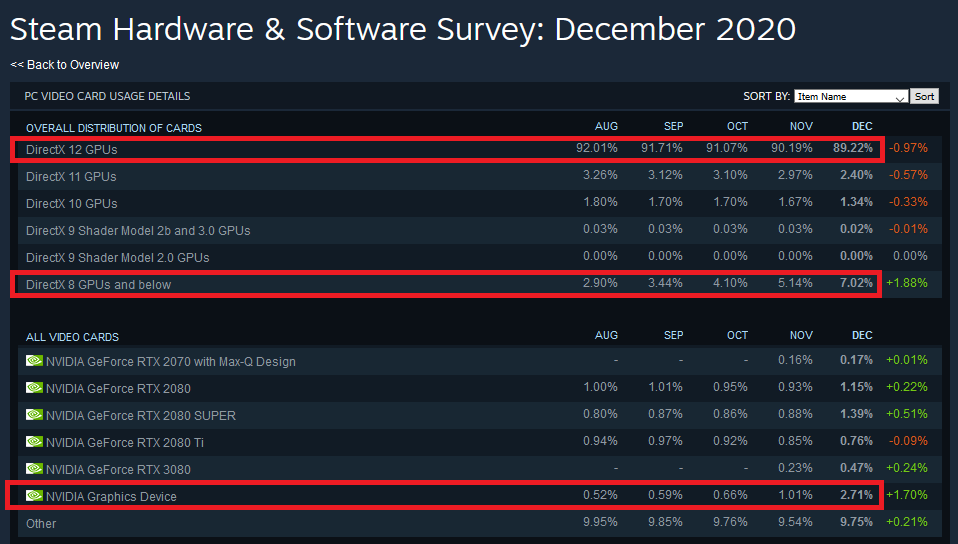 Every Nvidia/AMD/Intel GPU currently sold is (of course) DX12-compatible, but the DX12-GPUs have fallen 3 percentage points over the last months while the DX8-GPUs (and older) have risen 4 percentage points.

So probably the gained 4 percentage points "DX 8 and older" are new DX12-GPUs not properly tagged in the survey data, very probably Ampere and RDNA2 GPUs.

Unspecified Nvidia GPUs are shown as "NVIDIA Graphics Device" in the data. For a long time this was around 0.5% and probably mainly Nvidia Quadro cards, but it has grown the last months 2.2 percentage points... these are probably Ampere cards. The remaining 1 - 2 percentage points gain of "DX 8 and older" could be RDNA2.

The next months will show if my theory can hold up, when more and more Ampere and RDNA2 cards show up in the hardware survey and get correctly tagged as "DX 12 compatible", which would result in less than 3% "DX8 and older" GPUs and at least 93% DX12-GPUs.

I think your theory is very plausible. Valve always goes late when it comes to updating its hardware databases, and so it's possible that part of the new Turing cards aren't properly identified. And when it comes to AMD... well, I was going to say what for the first gen of Navi cards because they're capable of mixing the new ones with them but, since they're down, they haven't done it (yet).

We'll see if they've updated it next month.

Something is very off with their charts right now. Just look at the CPU charts: The landing page gives AMD 26.91% market share, which would be a plus of 0.4 percentage points over last month.

However, if you click on the chart, it brings up something where AMD lost 2.18 percentage points instead:

So my thought is that some Asian Cybercafés got counted again, and their older hardware and software is what made made all the more modern systems drop down

So after some strange December data (f.e. the CPU charts and the huge RTX Turing jump from 12 to 17 percentage points), most charts are back to November levels (plus expected Ryzen gains): 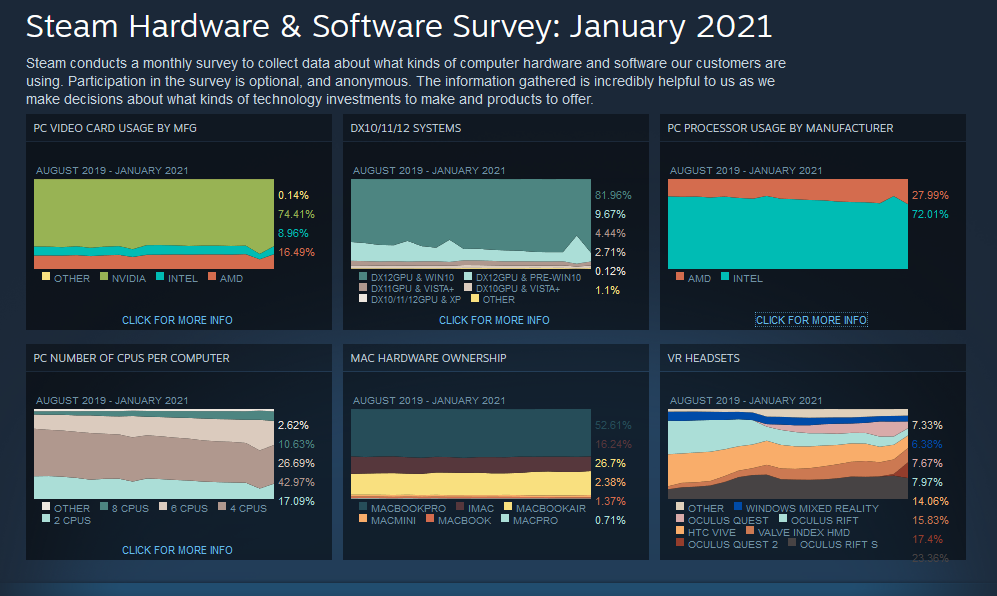 They also changed some December data afterwards (f. e. Turing now shows 16% instead of 17% for December): 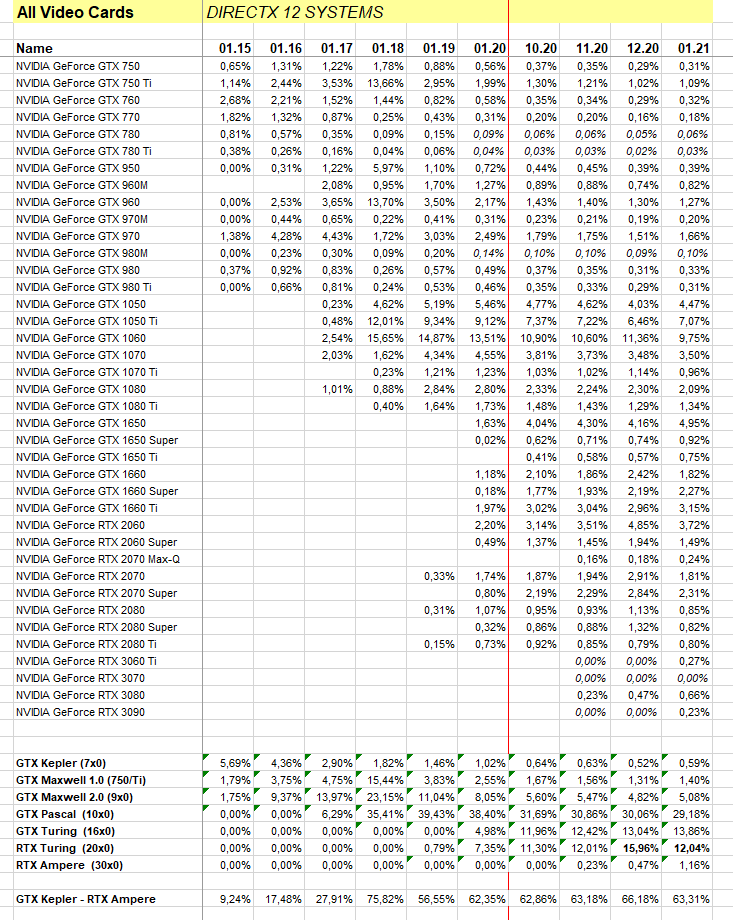 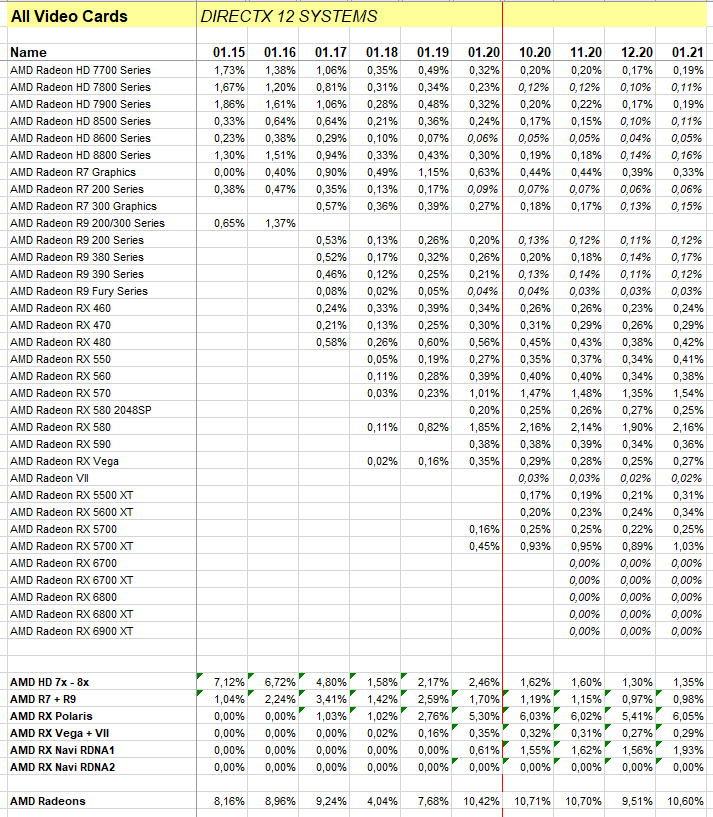 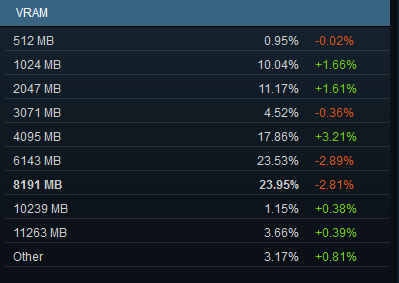 As a VR fan I'm happy that the downwards trend in the December data seems to be and exception. Now Steam shows a new record: 2.13% of the surveyed PCs have a VR headset connected.

More and more of the hugely popular "Oculus Quest 2"-headsets get connected to PCs for more demanding VR games: 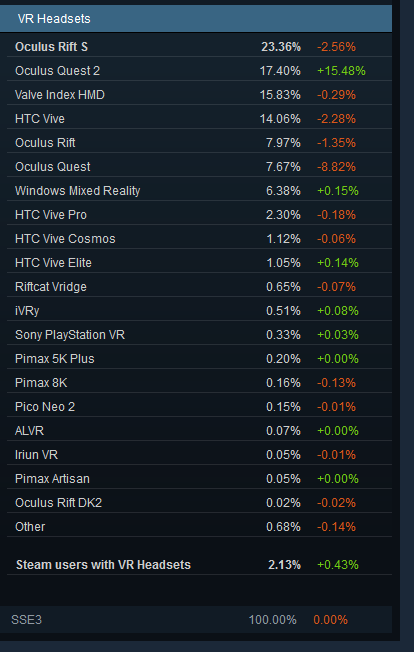 A look to the OS versions shows the still growing dominance of Windows 10 64-bit. 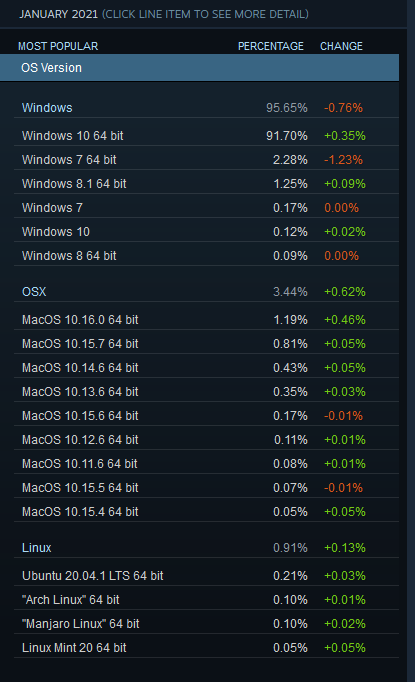 I agree that the lack of 3070 or any Navi 21 cards is strange, but we know Steam doesn't always make a good job with these surveys, as proven by the December results.

Glad to see VR still on the rise. And yes, the Oculus Quest 2 users popped out of nowhere. Seeing lot of them in Pavlov VR.