Pretty much to be taken that Digital sales are also better on the Switch version than WiiU.

This has been happening pretty consistently with every Switch port except Mario Kart. It's one of the reasons I hate the "ports count as part of a lineup because people haven't played them before!" argument, considering probably half the sales or more are previous owners. Yes yes blah blah blah i disagree alchemist you're a disgusting sack of shit blah blah blah

Anyhoo, the Switch is doing incredibly strong in terms of software. PS4's numbas seem incredibly boring but i'm sure someone will do the math and find that it's the raining champ including digital

Wow Nintendo is this week really dominating the charts.

Just imagine how it would look like, when they would have a good third party support.

2B be spankin' Bayonetta already.

The only other Wii U ports are Pokken & Bayonetta.

Pokken has already outsold the lifetime sales of the original version and still showing solid legs.

At the last presentation, Nintendo showed that Bayonetta is ~33% above the original in the same time frame.

In other words both are following a similar trajectory as Mario Kart.

I dont believe the DKC numbers, in Japan it did like ~2.5x the FW sales of the original so i have a hard time believing it did ~15% less FW in the US.

The only reason is, that the 3rd-party-games don't exist. If they do, they sell on the level of the Xbox mostly: 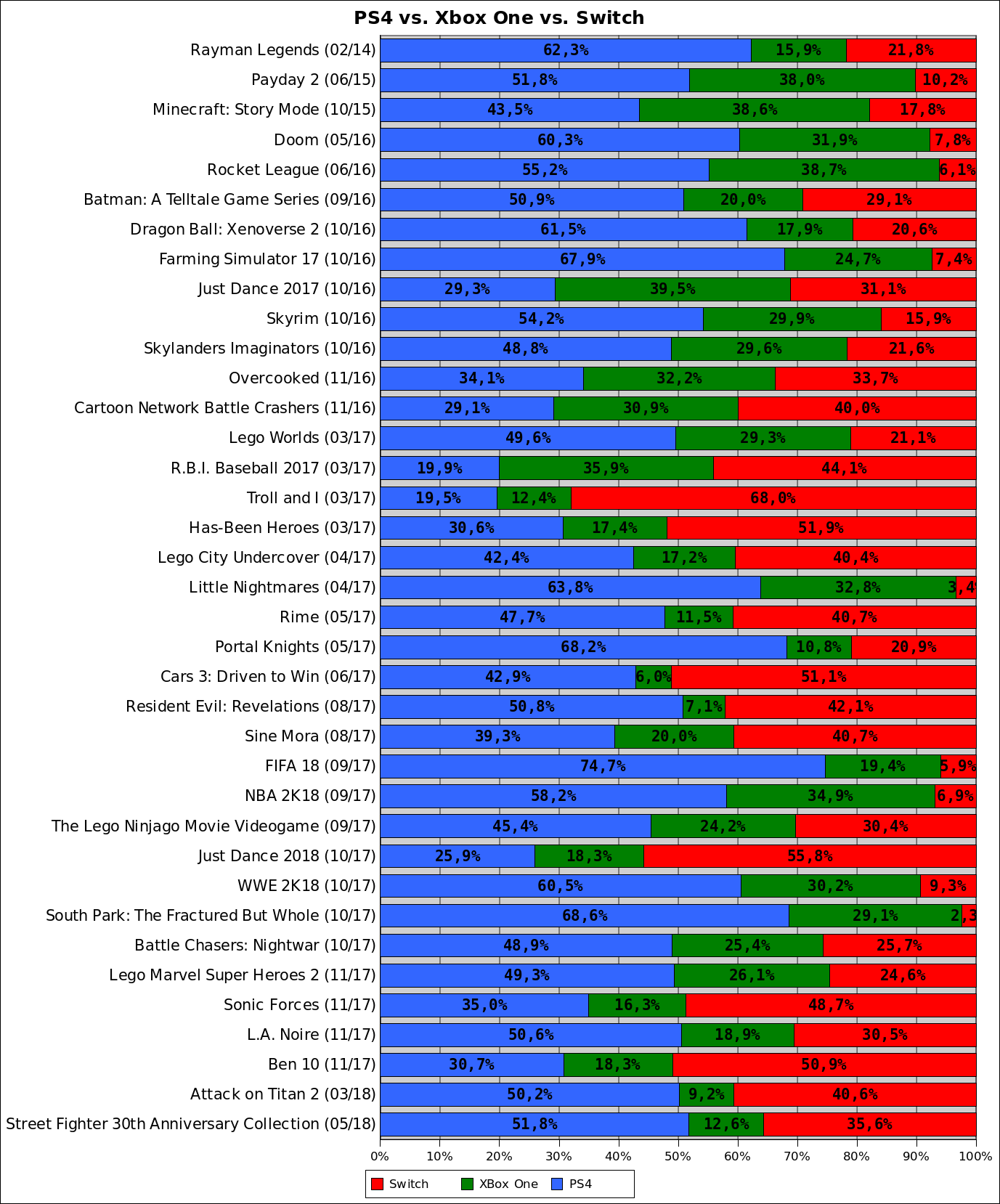 Of these 17 games sell better on Switch than Xbox, and 15 better on Xbox. It seems the playing field is pretty leveled. Still many 3rd-party-games are missing Switch, hence they can't sell on Switch to begin with.

I know this. But these games sold poorly so these spikes are all relative, they aren't big at all. And given how many of these are re-purchased, I still don't find this a legitimate case for some huge new market (frankly I think most people who get a switch only care about new games, except for Mario Kart).

You say they are following a similar trajectory to mario kart but you are purposely being selective. For Pokken for instance you just said the games legs are "solid". Yes, an ambiguous, meaningless, descriptor. I love those! And for Bayonetta, one of the worst selling exclusives, you used a big stat to make it seem significant. Again, because of percentages being relative, it's not.  You want to know the difference? Mario kart will actually continue to sell. Current percentages for Mario Kart compared to other ports will probably only continue to grow in difference in favor of MK, and by this holiday, and the next, until we get a MK9.

Your post would make sense if I was saying the ports weren't selling significantly well for just that, a port. I didn't say that though. Or if I just flat out said they were selling badly. Didn't say that either.

The graph is great but the comparison is not fair. Most of the games that have sold worse in Switch than in Xbox One are late ports, so the Switch version will always have a disadvantage of launch time and what it implies in terms of advertising and hype, price and some of these ports have been of dubious quality, like South Park that came out broken. I have no doubt that under equal conditions, most of the third party would have good sales in Switch.