There's probably 100 people that work on the show other than the main cast members though. All of whom thought they had a job lined up next season, but alas the mouth and twitter fingers of Roseanne...

Exactly. ABC liked the money they were making from the show, but their politics disagree strongly with Barr's. Had this been a left leaning show, instead of center right, the actress would have been allowed to apologize, maybe go on an apology tour on a few tonight shows, then get right back to work.

Does ABC own the rights to Rosanne? If not, someone else should pick it up. Hell, if I was Netflix I will try to pick it up. It's a golden ticket to success.

Edit: If I remember correctly, ABC and ESPN are owned by Dinsey. A lot of ESPN employees are making racist or outlandish remarks on Twitter, but weren't severely punished because they are against Trump. Ridiculous to say the least.

She doesn't joke around though even if you tweeted her 'you are joking right?' She would attack you.  She even attacked her own kids because they are not so radical like her.

Another Job killed by Social Media. When will people learn that using these Social Medial sites to say what you think and feel is no different then saying it right in your boss face especially if your account is not private.

It seems like you guys forgot that ABC wanted the broadcast rights for this show from the beginning, probably aware of Barr's political views. Roseanne being a Trump supporter was one of the big themes in the revival, if I'm not mistaken.

So maybe it's not about Barr's political views but about she being a complete shitbag on twitter.

Hopefully FOX revives it like they did with Last Man Standing after ABC cancelled it because of Tim Allen's "Being a conservative in Hollywood is like being a Jew in Nazi Germany" comment. ABC has become far too PC and leftist in recent years, it's a shame, they were once one of my favorite tv stations.

I've seen comics of other colors make racist jokes left and right and barely anybody bats an eyelash, but as soon as Roseanne, a white comic, does it, it's suddenly the worst thing in the world. The left has far too many easily offended snowflakes sadly.

From what I saw of the tweet, it's not bad enough to cancel the show over. I've seen plenty of blue check marks say worse about white people.

She is dumb if she didn't think these comments wouldn't have consequences, and now people are going to use this to support their idiotic "all trump-supporters are racist" crap

Well she is open Trump and is one of the reasons why the revival was an entertaining show but she took it to far on many occasions and today's tweet was the last straw. 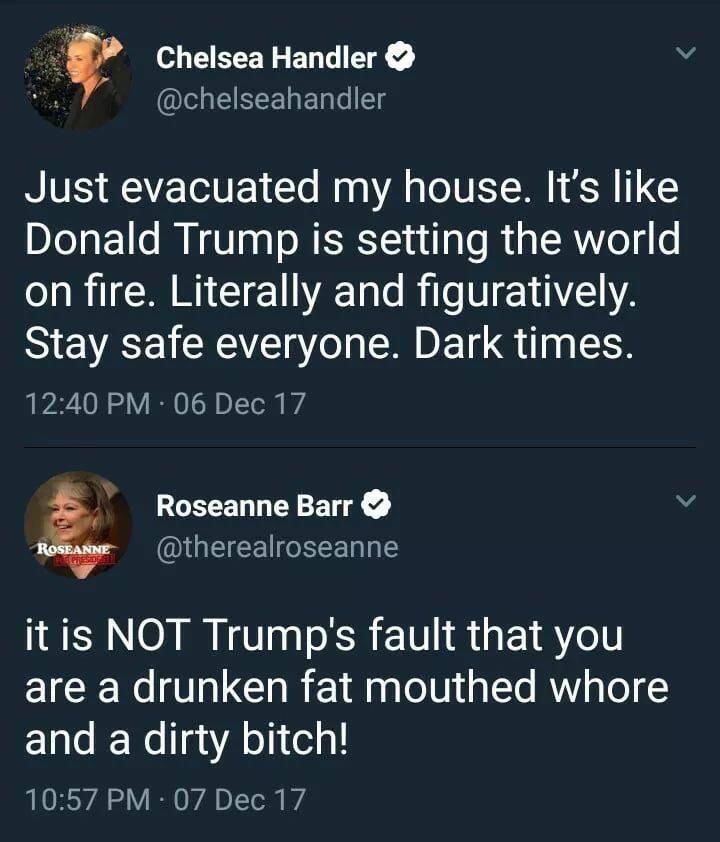