Forums - Politics Discussion - Trump's tax proposal: raise taxes on the poor, give to the rich

Yes the more Liberal leaning education system leans on College more than trades and aside from wasting money on College I am all for an education. The issue is that if you have the void being filled it goes away and has no need for change. If however everyone starts playing by the rules and a void in labor opens up it will be filled. I would leave my IT job in a minute for a good paying construction job, the problem is they are filled with low wage illegals. I know this for a fact because I have a couple buddies that are jobsite foremans and say that 90% of the people they work with are illegal. I was doing some welding for a company on the weekends and out of 50 employees not including managers, 4 were legal. Everyone else was illegal and not recieving benefits while taking a way lower wage than I was getting for the same work.

1) Through deductions, most of the people making within the raised zero tax level were already paying nothing. This makes things easier but not really much cheaper.

2) While the standard deduction is increased, many itemized deductions have been eliminated which again leaves most people close to breaking even, or possibly paying more if they were in a situation which benefited from deductions (ie States with high income taxes, families with numerous children, people with high student loan interest, people with high medical bills, etc).

3) Similar to above, while the child tax credit is increased from 1k to 1.6k, they are cutting the dependent exemption of $4k. That means for middle and upper income families with multiple children, the extra $600 of credits may not cover the loss of $4000 of exemptions.

And for an analysis of where the savings go if you want to look past how things sound in theory and into how they work in practice, look to the Tax Policy Center's analysis of the Unified Framework plan: 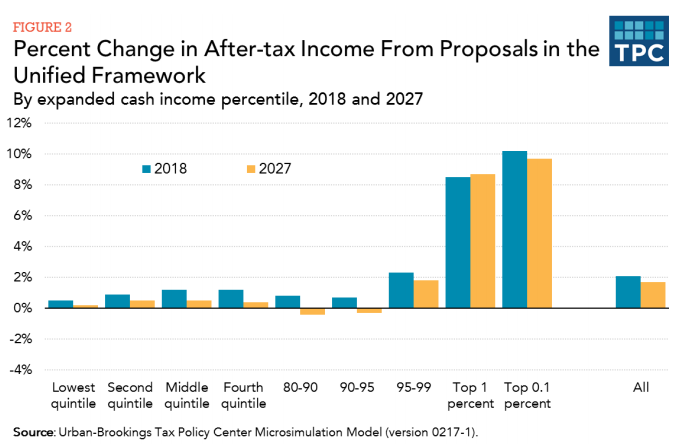 As you can see, middle and low income individuals get around a 0.2% to 1% boost in after tax income on average (as previously stated, depending on specific situations certain individuals will be paying more) while those in the top 5% of income get about an 8-10% boost in after tax income. Virtually all of the direct benefit of this plan falls onto corporations and the very wealthy.

Now, you might be thinking "well a cup of coffee is better than nothing", but you also have to consider the effects of decreased government revenue on different populations. Primarily the negative impacts of increased federal debt which is felt by everybody and in the long term could easily overtake any miniscule benefit these tax breaks have on the poor and middle class. Then there is how government outlays have to adapt to lowered revenue. As we have seen with the Republican budget, this typically involves cutting programs which disproportionately help the poor such as Medicare/Medicaid and the SNAP program, which will often leave lower income individuals having to pay more out of pocket, reducing their real spending power.

But like I said, the void hasn't been filled. There are still plenty of jobs in the trades and in agriculture. Just google "labor shortage construction" and you will find a plethora of articles detailing how there is a current labor crisis in construction. Here is one article from Texas which describes how these labor shortages are causing issues post Harvey: http://www.businessinsider.com/r-construction-worker-shortage-could-weigh-on-harvey-recovery-2017-9

Without illegal labor, I wouldn't be surprised to see industries which largely rely on illegals to suffer some pretty disastrous consequences. Even with illegal labor, the void isn't anywhere close to being filled. There are plenty of jobs for Americans willing to take them.

What this will do is force higher wages for skilled labor. You will have a delay in filling the void but it will get filled as the word gets out. Companies will also start to offer training programs to entice people into the trade.

Do you expect that to come for free to consumers?  Higher wagers and more training always, ALWAYS, gets passed down the line.  You will pay more for damn near everything.

So here is how it affects me. AFter putting money into my HSA and 401K I will net right at about 60K. With my wifes business depending on deductions it will probably clear 20K or so. At the moment I dont itemize and take the standard deduction plus the child deduction. So that equates to 12K plus the personel exemption of 4K and 3K for my kids. So 19K in deductions. Under the new plan I get 24K off the top plus 1.6K per kid and 300 for my wife. So 29.1K in deductions. Even if I owned my home which I will this year, it will be under 500K, I do have student loans that I will start to pay but the interest on those wont be 12K a year. Add to this that my tax rate will go from 10%, 15% and 25%down to 12% and I will save even more. I am Middle class truely. Anyone who says they are middle class and lives in the city with a 4K a month rent payment or a 1 million dollar home is delusional.

Here is the current tax structure for reference.

The higher wages will not be for the same number of employees. You will have more overtime for existing workers and possibly higher salaries for retention. Base wages for new employees may go up slightly but will include benefits. Turn time on projects will increase but whats better, a fast turn time and layoffs or a constant stream of work?

4. Employers are not going to eat these costs.  They will get passed down the line.  If they were ok paying that amount and not raising prices, they would have been hiring legal citizens from the start.  You cannot increase operational costs without harming either your profits or market prices.

You missed the point. You will end up with less employees overall, just with higher wages and benefits. That is why it will take longer for projects. During times of disasster like Katrina and others building costs go up with demand for materials, not because of a lack of labor. Companies will and are starting to staff for year round work instead of overstaff for a project and layoff once the project is done.

1. Back up that last statement with reports.

2. That's just one component of the economy.  I posted that chart of illegal immigrant percentage of several job sectors a page or so back.  You might want to take a look at it.