Hi everyone. I hope everyone has got over the excitement of E3? I’m sure we can all agree the next 12 months are going to be very exciting in the gaming universe – and it’s also a very exciting time for PlayStation Plus! Not only are we celebrating our fifth anniversary but it’s also time to let you know about all the goodies coming your way this July.

Oh, and before I forget, from this month onwards the PS Plus monthly games will be updating on Tuesdays not Wednesdays so make sure you grab them as soon as they become available.

First up this month on PS4, the hugely anticipated action sports title Rocket League – an arena-based, futuristic vehicle sports game that will test your driving and stunting skills like never before. Take matters into your own hands in this visceral vehicle sports game. Soar high into the air to score amazing goals, perform incredible saves using the vehicles’ acrobatic abilities, and demolish enemy players at supersonic speeds.

Make sure you pick up the memorable Entwined on PS4 and PS Vita this month. Witness the tale of a bird and a fish who are in love but can never be together. Test your reflexes and hand-eye coordination skills to guide them both simultaneously over the course of nine unique lifetimes in a journey to unite their souls. Feel the emotional flow of the journey through a mesmerising soundtrack and abstract art style and set high scores to leave your friends trailing behind in challenge mode.

Next up, Styx Master of Shadows, a stealth game with clever RPG elements. Guide Styx through the winding Tower of Akenash, prowling through the shadows with aide of a host of special abilities. With magical Amber running through your veins, what you lack in might you more than make up for with stealth, as the golden elixir – often heavily guarded – raises your perception, sharpens your senses, and even offers the ability to turn you invisible for short periods of time.

Next, Mousecraft – a smart puzzle adventure from the team at Curve. Discover an epic tale of a crazy cat scientist who is striving to unlock the potential of a mysterious mouse-powered machine. Help a group of mice in their relentless quest for cheese, guiding them to their goal by stacking different types of Tetromino’s along their path.

Rain is the enchanting tale of a boy who chases after a girl with an invisible silhouette. After discovering that the girl is being hunted by ghostly creatures, he embarks on his own journey to save her. Upon entering the world he discovers that he has also become invisible and he must learn to navigate through the unknown, using the rain to guide and protect him. 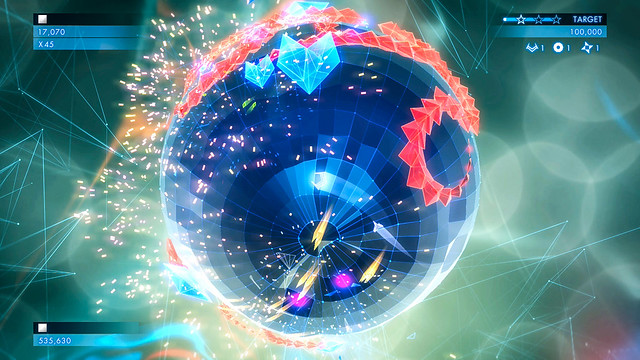 After its successful launch on PS4, we are very pleased to announce that Geometry Wars 3: Dimensions Evolved is coming to PS Vita this July! This release brings the game’s new 3D grids, challenging new boss battles, and more to the powerhouse portable.

Already own Entwined, but will check out Rain this month. I was hoping for better.

Meh... Might check out Geometry Wars 3, but the other ones don't really interest me. :/

Vivster is going to cream his pants. He gets his GOTY for free.

Seems like a decent lineup, most seem worth a try

Another month that i save money.

nice, interested in rain and Entwined (although I'm horrible at steering 2 things at the same time, melts my brain)

I'm excited to play Rain. I'm now glad I passed it up when it was on sale. I figured it would come to PS+ eventually. Styx looks like fun, too. I love a good stealth game.

The rest I could take or leave.