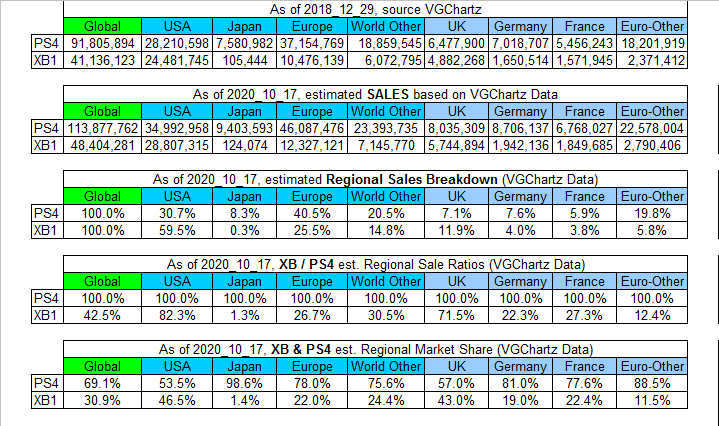 Update (2)
Obviously I under-estimated the Xbox Series "S" and did not foresee the Covid Effect, which DOES change the outcomes, in favor of the Xbox. I have not gone into full scale analysis since I lack the regional hardware data for each console, but I will still entertain a simple educated guess on this. Based on my previous analysis, I can say that...

a) Xbox sales improvement will be much larger than 3% points, and possibly 10% points, roughly putting Xbox global share to around 40-42%, rather than 34% (up from 31% of the previous gen). This is in line with the current shares ratio but it historically favors the playstation as we move on in time. However, it's a bit different this time, with the series s collecting the slacks and semi-casual gamers. It still is an unknown quantity, but I lean on the 40%+ global market share for the Xbox, still behind the Xbox 360 times but much better than the last generation.

b) Xbox will improve in all regions as I last predicted, though with a higher margin than before. Even better, thanks to the Series S, Xbox is likely to outsell the PS5 in the US by a considerable margin, expecting around 55% market share.

c) Total sales are also an unknown quantity at this stage, as this generation has not gone full throttle yet, as most games are cross-generational, and the last gen machines are still highly capable. My bet is that this generation will keep selling at a lower rate than the last one, though the generation may last longer.

Aside from market share gains in NA and UK, I also feel they will make headway in South America as well. For some reason I read in another topic that Xbox games cost less then PS games in certain countries there.

Otherwise I feel as the years go on only doing console marketshare won’t show the full picture. Especially if Xcloud really takes off with IOS and Android devices and those rumors of a Chromecast-like stick that allows to steam off the TV. Just something to ponder as the gen goes on. Really uncertain times ahead.

In the Analysis, I assumed they will make gains everywhere, although proportional to their current market share, so the gains in South America is relatively smaller and lumped under the "World Other" category. This estimates that the "World Other" market share for Xbox will increase from the current 24.4% to 25-27%. I tried to depict all this with two nice tables but for some reason the blog would not let me integrate it properly.

Here are the two graphs as regular links:

It's hard to say overall market share without Nintendo. But they're basically in the middle of generations/an oddity because Switch is a hybrid. PS5 and Xbox Series S/X will compete with Switch and Switch 2.

Some people expect a closer race than that, I don't. PlayStation is a more dominant brand than Xbox, especially in Europe and Japan. And it has exclusives, even if they're shrinking in number.

Argentina definitely has it for some reason

xbox will probably gain market 'share' in japan vs PS, if only becasue the ps5 is just GOING to flat out sell less then the ps4 there, due to the switch being an absolute dominant force that probably can't be lodged out of its current postion, since it basically combined the market share and appeal of the 3ds/vita/wiiU, all three of which sold SUBSTANTIALLY better in japan VS other reigions while the ps4 underperformed.

Xbox to gain market share in Japan against PS? A little to much optimism there. lol