Forums - Sales Discussion - Comparison of sales of multiplat releases (PS4 vs. Xbox One vs. Switch)

Well, I thought it might be an interesting idea to compare the sales of games across different consoles, if they release on multiple of them. This should give us some insight in the selling power of each platform for games.

I give percentages, this are the percentages of how much of the game sold on the specified platform. For this I only include this three consoles, if the same game is releases on different consoles, on PC or on mobile devices, these sales don't matter for this. So for an even distribution between the three you expect 33% for each platform. Above that is good, below that is bad. I include a few games, that are released only on two platforms as additional graphs, but here you expect 50% instead. I only added a few releases that are missing one platform, mostly for some interesting games, or japanese games which are missing the Xbox.

For many of these games are special situations: additional content on one platform, late port for another and so on. These should you consider if you try to analyse the data. The data in this table is based on VGC-data, so maybe it is incorrect or unprecise.

I order by first release. I try to update from time to time and add new games as they get tracked. If you think I miss interesting games, say something and I add them.

PS4 vs. Xbox One vs. Switch 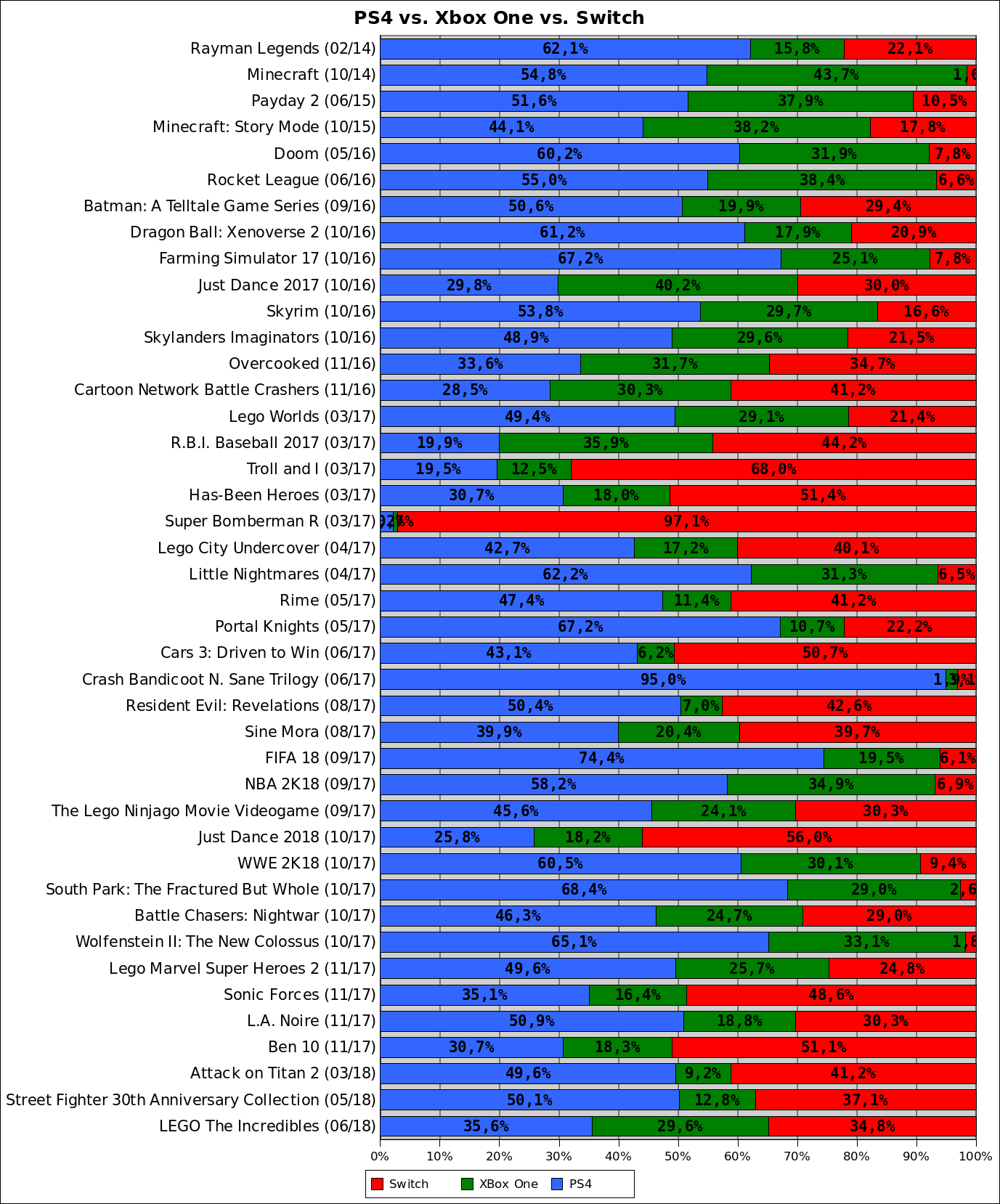 To show how the new releases since the last update do, I have a graph containing these titles. Here I only consider the weeks it is out now for the newest platform (if they are late ports). I notice the number of the first weeks after release included in this figure. In the above graphs, all sales are considered, even if it is sold for a few weeks on one platform and for years on another.

Upcoming games to look for:

Some observations and conclusions:
PS4 dominates the sales of multiplatform games in general, although it differs in single cases. Overall it is in lead as illustrated by the following graph. It shows how many games (of the ones selling for all three platforms and breaking 100K) have more than 10%/20%/30%... market share on that platform. As you can see the PS4-line hovers above the other platforms, indicating that in general the games have a bigger market share on that platform. The lines for Xbox One and Switch are crossing each other, indicating a much closer sales performance.

PS4 really dominates in Sports games. Rocket League sold 56% on PS4, NBA 58%, WWE 60% and FIFA sold extreme 75% of the copies between the three on PS4. For FIFA especially might come in play that football is liked in europe, which is also PS4s strongest market. At the same time sports games are among the weakest sellers for Switch. Rocket League only 4.3% on Switch, FIFA 5.6%, NBA 6.8% and WWE 9.3%. R.B.I Baseball games seem to be the exception from the rule.
Lego games see a more leveled playing field, PS4 still leading strong, but not that dominating. The sales share here is below 50% for PS4. Meanwhile XB1 and Switch are usually quite close and parting the rest between them.
Just Dance is the game series that does worst on PS4. Switch has taken over the lead with the newer release from XB1.
Japanese games are doing (as probably everyone here already knows) abysmal on XB1. To illustrate this I included Monster Hunter World, which untypically for japanese games released on XB1. PS4 and Switch are here more eye to eye, as can be seen with Disgaea 5, DQ Builders and Puyo Puyo Tetris.
Last edited by Mnementh - on 30 January 2021

I guess PS4 owners don't like to dance or to play Tetris.