Oh, no, sorry if my hints were confusing.

Here are all my hints:

Hint 1: Lots of heights and climbing.
Hint 2: This franchise went open world last year.
(And to be clear, the game in question is not open world, only the most recent game in the franchise is.)

I have a bit of catch-up to do, so I drop hints for a few more games. But before that a quick look, on how the standings are on the predictions to my games. The_Liquid_Laser already has taken the lead with six correct guesses. Last year at this point he had only three and went on to guess 17. SanAndreasX is second with three guessed games.Jpcc86 is third with two. A lot of people have guessed one game so far: TruckOSaurus, RingoGaSuki, Agente42, Bofferbrauer2, S.Peelman, forest-spirit, Landale_Star, BraLoD and Farsala. Still 30 to go, so plenty of chances.

a) The character the the games in this series is named after, isn't even in this game.

27: Zelda Link's Awakening? I wanted to say Majora's Mask at first but even though Zelda indeed doesn't play a part in that game she technically still has a short appearance through a flashback.

I could google the Russian quote, but I won't. 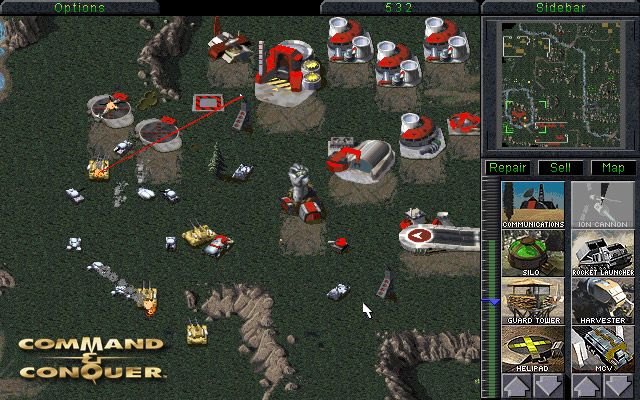 The original Command & Conquer is the game that made me a fan of real-time strategy, and although it's naturally somewhat dated by today's standards as the genre has moved forwards and introduced numerous new elements and tweaks to its gameplay, I can still go back and play it at pretty much any time and have a great time. I love the relative simplicity of the game, and even though nostalgia naturally plays a role in C&C's relatively high placement in my top 50, I can honestly say I prefer real-time strategy games from the mid-90s through to the early 2000s to most games in the genre today. I just find these older titles a much more enjoyable experience than most modern RTSs.

Besides the gameplay, I also really like the story in the game, and I still think Kane is one of the best villains in video game history. In addition, the soundtrack to Command & Conquer is great, and remains among Frank Klepacki's best works to this day.

Monster Hunter 4 was going to be my next guess.

Reposting because no one even tried to guess and the original post is now 2 or 3 pages back.

32. You never really die in this game, but if you get a game over, you get turned into a plant-animal hybrid.

31. A dethroned king becomes a pirate and kidnaps your uncle.

30. Blasphemy time. Our gracious host especially would regard the placing of this title on the list above another game to be an abomination.

On 30, you are getting closer, but still not quite there.

30.  a)  This popular series had let you choose your character before, but this is the first time where 4 different people could also play at the same time.
b)  The main character of this game is known for defeating King Kong and Godzilla (or at least creatures that resemble them).
c)  2D platformer

25.  a)  This Switch game is a combination of two different franchises.  It also appeared on other platforms before coming to Switch.
b)  This game is not published by Nintendo, nor is Nintendo licensing out their IP to another company.

24.  This game must really love Beyonce, because it has a whole lot of things in it that she'd like to be put on her.  First in the series.