The WIi U was designed to make bank even if they fucked up, which they did end up getting both in the end. They fucked up, but they still managed to make bank on the system, enough to consider it a setback, but not a "oh shit we've made no money from the system at all this entire gen", so they still got something out of it instead of absolute "you fucked up, now you're gonna suffer the consumer wrath" style of punishment they should have gotten. Despite that setback, they were still rewarded enough to make money back on the system they didn't push hard enough on, which tells me that there was a decent size of the fanbase to help them get that far, instead of hardly any at all.

Let's take babylon's fall for example, yes that's a game and not a system, but because of the way it was designed to be, and the lack of marketing, and exclusivity shit, it sold like utter crap and now has less players than it did on day/week one. That's how a game/system should be punished, or hell, the recent crap going down with VR chat has tons of folks requesting refunds and leaving negative reviews. That's basically become a big PR nightmare for VRChat, while Nintendo still got to slide by with the Wii U and make bank and still not have to worry all that much about PR, because they brought out the Switch.

Point is, the fans helped them get by, they just weren't punished hard enough, and with the Switch it's all magically water under the bridge, despite the joycon issue still looming over the system (and me having a 2nd pair busted, with Nintendo asking for another £70 from me if I ever want to play the system I bought ever again).

You may have not bought much into the Wii U, but others did. You have to remember that one purchase doesn't make for a a greater snowball effect, it takes bigger numbers for a greater effect to happen.

Even if the Wii U made money from Nintendo, there is no doubt they missed their targets and there was hell to pay via the board and shareholders. I don't think business is as simple as some are making it out to be.

At the end of the day Nintendo makes some really god awful decisions.... but consumers love Nintendo games, Nintendo games are exclusives. Nintendo is doing Nintendo based on market desire. Nintendo's downfall will be if they stop making some of the best games in the industry. As long as Nintendo has great software, they aren't going anywhere. Perhaps I am part of the problem, but despite annoyances I have with Switch I am not missing out on Zelda, Metroid and Mario.

First, Nintendo didn't "make bank" with the Wii U.  Nintendo posted its first losses in over 3 decades during the transition from Wii to Wii U. 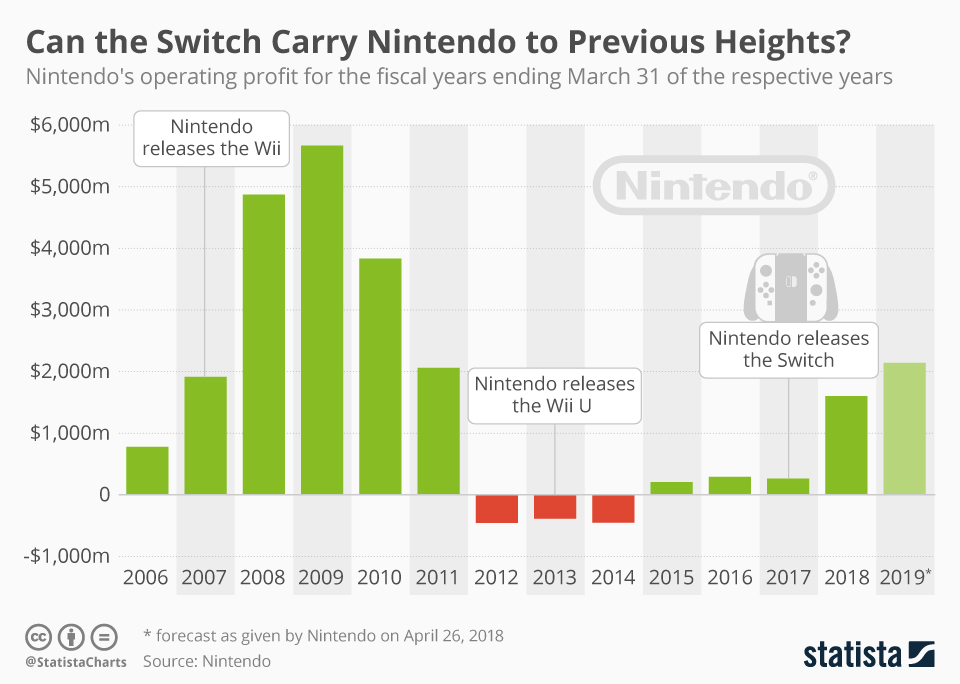 As for the "fans let them get by" statement, some people enjoyed the Wii U as a console, myself included.  The Gamepad, maligned as it was by the masses, actually did bring innovative gameplay with it.  In Lego City, when an npc character would call Chase McCain's communicator, you would see that characters face talking to you on the Gamepad, and their voice would come through the Gamepad's speakers.  That's a higher level of immersion than an onscreen popup as how it has to be handled in other games on other consoles.  In Madden 13, you can draw-up Hot Routes at the Line of Scrimmage on offense and defense.  This added a whole new ease of changing plays on the fly that would have required multiple button presses and predetermined routes to achieve in other Madden games on other consoles.  I continued playing this version of Madden for years afterwards due to this feature.  Meanwhile, every year, you hear complaints from Madden fans about the lack of innovation from each successive Madden game on other consoles.  These are just a few gameplay examples that immediately come to mind.  There were quality of life features as well.  Going from typing on the virtual keyboard of the Wii U gamepad to having to manually click to each letter of every word of every sentence on another consoles controller feels like a massive step backwards.  The Wii U gamepad became my goto for both YouTube and Google, because of how much easier they were to navigate than on other consoles.  So, yeah, the Wii U had positive things going for it that the majority of gamers overlooked.  That doesn't make all Wii U owners blind Nintendo fans who buy anything Nintendo puts in front of them.

Having said that, Nintendo absolutely didn't "get a pass from Nintendo fans" through that generation.  The much higher sales Wii U software have enjoyed as Switch releases prove that a very large number of gamers indeed held back their money from buying a system and games they otherwise would have purchased and enjoyed.

Also, how many other console manufacturers do you see personally take pay cuts at the executive level in response to the negative reception of their hardware?

"It has been revealed that Nintendo president Satoru Iwata will be taking a 50 percent pay reduction following Nintendo's recent financial results.

He's not the only one taking a cut; legendary game designer Shigeru Miyamoto will see his wage slashed by 30 percent, as will fellow Nintendo veteran Genyo Takeda. The seven other members of the company's board will each shoulder a 20 percent reduction.

The news comes after Nintendo issued warnings of further financial losses in the future, attributed to the poor commercial performance of the Wii U console. Nintendo expects to make a loss in Q4 of 2014."

*Regarding your joycons, have you tried spraying Deoxit into the thumbstick?  In most cases, it's a buildup of dead skin/debris that get inside the controller which causes the drift.  I still have my launch day Switch joycons, and I've probably sprayed them with Deoxit twice in 5 years, and it eliminated the drift for a long while both times.  I'm not dismissing the drift as a controller quality issue, mind you.  Just mentioning something that has worked for me as a speedy and cheap fix solution.

I  agree with your post, but I think you tried too hard here. Why should we care for how a company handle their directors when business are doing bad? They could be fired if the sales are bombing and I personally wouldn't be really concerned. Or they could do nothing and keep the same staff, which I wouldn't care either

Nintendo is the only company creating handhelds

I can't stand mobile gaming and Steam Deck is not even sold where I live, not to mention the endless queue to get one

I could hate Nintendo games (which is not the case, they are my second favorite publisher, actually my favorite currently) and would still buy their hardware only to play third parties portable

That's why I had no problem ignoring Wii and Wii U existence, but didn't have to think twice before getting a Switch

This is a inherently problem of having so few console makers. I have no option, it's about picking whatever is available or finding another hobby

I get it, you guys are the best fandom in the entire games industry that you will dislocate Nintendo's arm if they ever did you any wrong.

Also no, I don't have access to this Deoxit spray you're talking about. I can't even find a proper screwdriver for a screw size as small as the Joycons. I looked it up and it's usually the rubber peice wearing down or not making proper contact with the rest of the circuitry. Only some cases I've seen where dead skin becomes the issue. I mostly kept my switch in it's Dock to prevent it from getting messy, and used rubber guards for it to prevent said skin from getting inside the cons themselves.

This is my second pair and they didn't even last a full year.

I just think it's utter bullshit that I have to pay £65 a pop for a controller that breaks down every few months, it's insanely ludicrous and it's the only system I've ever had drift issues with (never had it happen to any console or gamepads for me, not even the Switch pro gamepad).

What Nintendo should have done is bite their lip and allow for full gamepad refunds WW, yes it would dent their bigass wallet, but that's the price you pay for going with a shoddy client.

I don't get why anyone here would care if Roger Smith got fired, because I sure as hell know that anyone working at Nintendo, Sony, MS or any other company on the planet wouldn't care if any one of us got fired or let go, so I don't see why we have to suddenly care.

A CEO taking a cut into their own pay should be the default go-to, not the outlier.

I only included it, because it is a contradiction of the sentiment that Nintendo wouldn't care if a console flops or succeeds as long as enough money flows to the top of the company.  Corporate greed exists in one form or another in all companies, but here was a not often seen case of top tier executives taking a failure personally rather than laying-off lower level employees to protect their bottom line.

Joy cons have been a problem for me too. Problem is I'm having same issues with drift with the ps5 controller.

Not at all sure where you got "best fandom in the entire games industry" out of my post, since I specifically detailed how the majority of even Nintendo gamers passed on the Wii U.

Also, you don't need a screwdriver to spray contact cleaner into the thumbstick.  You just spray it around the base, and the contact cleaner gets in there the same way skin/debris does.  Anyway, if what worked for my issue isn't relevant to yours, all right then.

I've never had a drift issue with another console's controllers before either.  But here's a list of hardware issues that I did personally experience with other consoles that I never experienced across 7 generations of Nintendo hardware:

Console couldn't read discs on Day One of console purchase, fresh out of the box from retail (original PlayStation)

To be clear though, I don't excuse the Joycon drift as a major issue, as I am someone who has been equally frustrated by it whenever it rears its ugly head as well.  I also don't agree with their response to every situation either.  Like their position that "dead pixels" on the original Switch's LCD screens are a common characteristic of LCD screens, and therefore not considered a defect.  I'd be as furious as the next person if I got a Switch with dead pixels on the screen and Nintendo didn't offer a free replacement.