Putin's hour-long retelling of the Soviet Ukraine-Russian history was a retelling in the most extreme sense of the word because a lot of it was bullshit and ramblings of a clear madman.

Ukraine does not want Russia in control, the Ukraine people do not want Russia in their country, Ukraine is a sovereign country which is being INVADED by another, Russia is the only aggressor here, if Ukraine wants to join NATO or work with other countries it is their right to do so and explore those options as an independent country but of course you rush in to take a bullet for Russia because any chance you get to throw a dig at the West/Dems you instantly take, no matter the subject, no matter what crazy conspiracy theory bullshit that you have to parrot, it honestly disgusts me.

Last part is especially funny considering you are right now one of the biggest spewers of bullshit propaganda and corruption of truths on this website.

You're right about the ounce part.
And that's the problem. There's a point where the less intelligent someone is, the less aware of it they become.
Incoherent ramblings sound intelligent to people whose minds process information the same way. 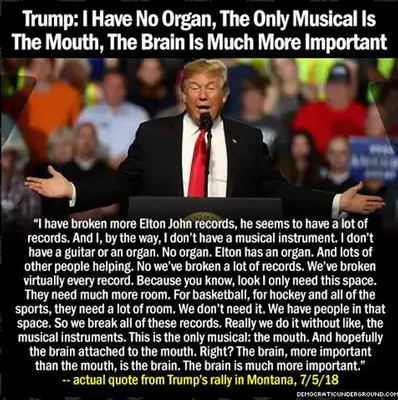 This wasn't a one-off. He said things like this all the time, to the applause of the crowd.
But when he held one of his speeches in front of the UN assembly, they literally burst out in laughter.

And I lost count of how many of Trump's close associates that called him a moron or idiot.

Here's what Trump's secretary of state said about him:

“It was challenging for me,” he said, “coming from the disciplined, highly process-oriented Exxon Mobil corporation, to go to work for a man who is pretty undisciplined, doesn’t like to read, doesn’t read briefing reports, doesn’t like to get into the details of a lot of things, but rather just kind of says, ‘This is what I believe.’ ”

His problems with reading intelligence briefings was well reported from the start, and what they had to do to get him to read them is horrifying, and something you'd expect from a preschooler.

His work hours mostly consisted of what they called "executive time", which was him watching TV and scouring Twitter. He was treated like the emperor with no clothes.

Who is saying that Putin is not intelligent? That's the first I've ever heard of it.
There's a world of difference between how he acts and expresses himself, and how Trump does.
Putin is seemingly a very shrewd man, who also has a very broad understanding of the world.

The 'respect' you say he had for Trump is easily mistaken for approval of Trump's behavior.

Trump stood on stage with Putin and said he believed Putin over his own US intelligence.
Trump also expressed interest in withdrawing USA from NATO. Which is Putin's wet dream.

Thread banned Padib, I already gave a warning early on in the thread.

My tone is harsh but I've been following this very closely for days now and a lot of what I've seen disgusts me, the child screaming at the bomb being dropped near his home, the father crying and hugging his daughter as he sends her away, senseless deaths and destruction, the Ukraine citizens don't want this, the Russian citizens don't want this, make no mistake, this is Putin's war, only that lunatic wants this war, his government are clearly terrified of him, his citizens are terrified of him and it isn't their fault either, even the soldiers of Russia are being pointlessly sent to their deaths, young soldiers.

So if I see you rushing in to say "WEST BAD" when there is very clearly only one true aggressor here, only one country invading another, only one killing hundreds/thousands and for what? Cause Putin feels nostalgic about USSR and wants some sort of legacy? The fucker barely mentioned NATO in his rant about Ukraine's right to exist, if you jump in to take a bullet for Russia then you're a lost cause, go to some deep-web Pro-Putin circle-jerk, I don't want to see that shit in here.

The only evil here is Putin and we should focus on that but also showing our support to Ukraine and Russians that don't support this war.

Heroes of the Hostomel Battle
Pic by Olena Yakhno pic.twitter.com/guOplSD6JI

The breathtaking bravery of the Russians who know they’ll be arrested for protesting this war and do it anyway. pic.twitter.com/w9lrnKjVnF

Long into the night - Zelenskiy goes on tv to say he’s staying in Kyiv pic.twitter.com/KEk9rW37Hx

"All the defenders of the island of Zmiinyi died, but did not surrender. All of them will be named Heroes of Ukraine.” said Ukrainian President Zelensky.

Official confirmation that Zmiinyi/Serpent Island has been captured by Russian forces.

Russians: This is a Russian warship. I propose you lay down arms and surrender to avoid bloodshed & unnecessary victims. Otherwise, you’ll be bombed.

They were all killed https://t.co/uNqh5b9L8C

I just got through watching Tucker's program for this evening (I HAD to see how he'd respond to these developments) and it was painful. I've never seen him so robotic before. Clearly either he or the network he works for knows that his audience ain't with him on this one because he found himself stuck reporting academic facts about the war and interviewing actual Ukrainians without editorializing. (One could tell he still wanted to take swipes at the Ukrainian president from time to time, but he restrained himself.) It was the most plastic, emotionless, clearly forced coverage I've seen on television so far. The man clearly sides with Russia but feels restrained in what he can say now that his "How long is imminent?" refrain has fallen apart.

This I believe qualifies as the darkest moment for Europe in the 21st century so far. As I write this, explosions are being heard inside Ukraine's capital city of Kyiv. One can expect it to fall within days, or perhaps even mere hours.

The all too rare scenes of dissent inside Russia are the only thing that give me a semblance of hope here. It takes monumental bravery to publicly criticize Vladimir Putin in any way inside Russia. Those who do so are often known to disappear under mysterious circumstances, never to be heard from again. I love these audacious people, whoever they are!

Also this isn't about the US and I hate people trying to make it about NATO or US or Biden or whatever. Those are side characters. Focus on what we can do for Ukraine. Send weapons, sanction Russia and hell even send 100s of thousands of spies from around the world just trying to off Putin. Like I want every ukraininian to have missile launchers and I want a ridiculous amount of spies from every other country coming in trying to off Putin, like we hear about a new attempt every half an hour.

Ukraine defense efforts reports high success. Estimates suggest that the Putin's forces have been unable to achieve their day 1 objectives because of an unexpectedly stiff Ukrainian resistance.

General Staff of the Armed Forces on the current state of war in #Ukraine pic.twitter.com/GEyuEp0Lsc

"The estimated losses of the enemy"
"Tanks, more than 30"
"Armoured vehicles, up to 130"
"Aircraft, 7"
"Helicopters, 6"
"Keep calm, follow the information on official resources. Together, to victory."

Over 130 Ukrainians died. 800 Russian troops are estimated to have been lost.

In Russia, they are arresting thousands of protesters who oppose the war.

This is the old case of invasion force with superior numbers of soldiers and weapons vs. the defending force with home field advantage and lots of defensive structures.

Looks like the Ukrainians, if those numbers above are accurate, are doing better than the Russians so far even proportionally.

Also, the Ukrainians are winning the fight over who can get the most inspiring moments out there, with those island defense guys telling the Russians off before dying and now the women doing it too, both of those clips have gone viral. Wars are fought by strong mentality and that will only rally the Ukrainians more.