Forums - Microsoft Discussion - Infographic of upcoming, rumored, and ongoing games from Xbox, Bethesda, and Activision/Blizzard, Plus Pie chart of all studios

This infographic was made by the user SoulNinja. Only thing missing from this is the Certain Affinity Monster-Hunter game, but that was leaked after this was made. Kind of amazing to think Xbox went from almost closing to this. 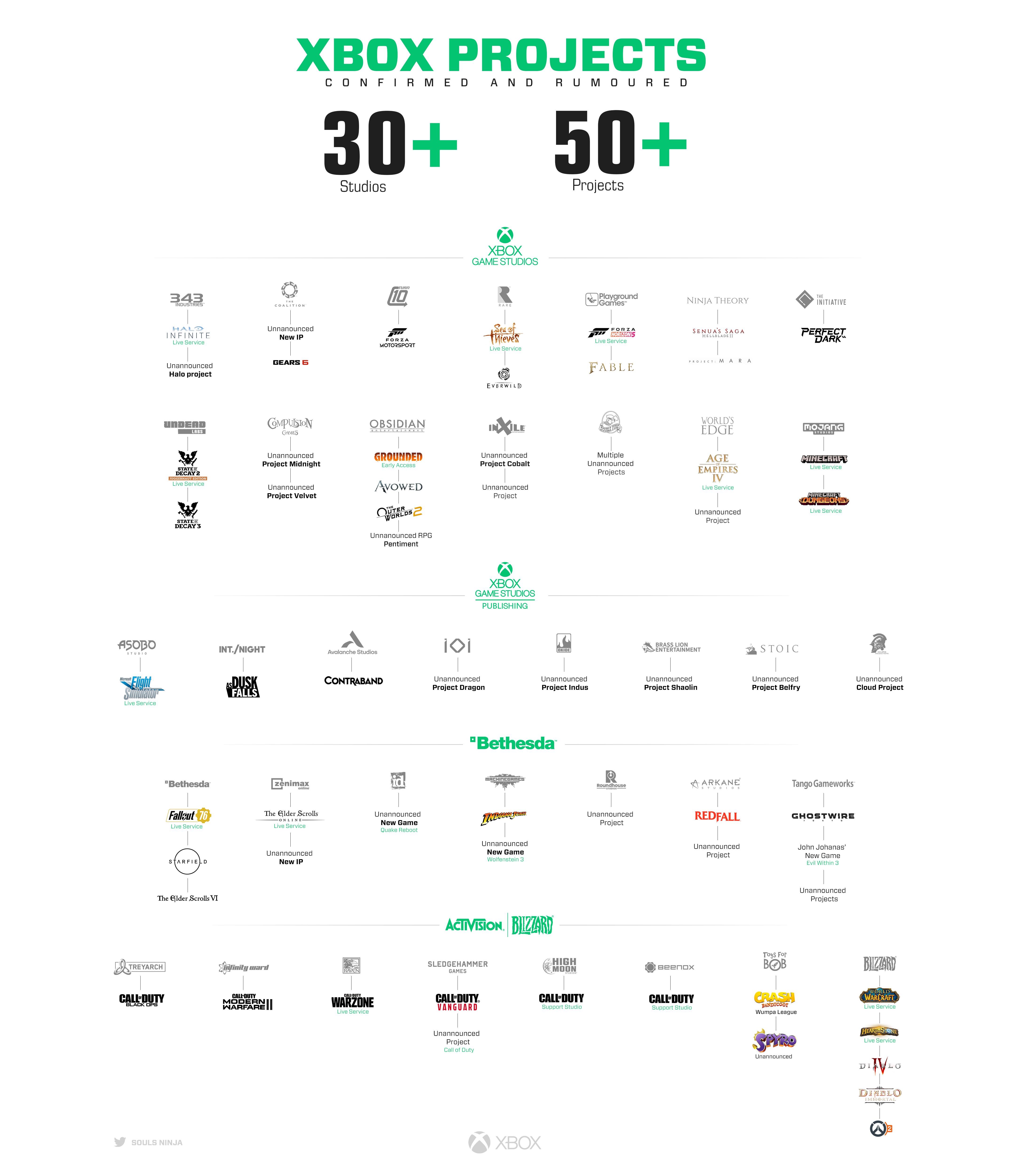 This one took a while but it's finally done. 😅

Here are the ongoing, upcoming and rumoured projects that Xbox, Bethesda and Activision Blizzard are working on.

The pie chart below is based on employee numbers within each studio. Really gives you a look at large ABK really is. Xbox gaming will be at roughly 15,000 employees once the acquisition finalized.

Impressive infographic to show how big Microsoft's purchase of Activision actually is. The sizes of the segments represent number of employees. pic.twitter.com/Kn7ew6gKnp

That chart is very interesting. I'm becoming increasingly convinced that MS made this purchase mostly to rapidly increase their dev capabilities and shift most of those teams off of things like CoD and into ips that truly diversify their lineup to push hardware and Gamepass subscribers.

They will still make CoD, hopefully just one every two years or move it to a Halo Infinite/Destiny model with massive updates to one game over a long period. But I think 70% of those employees will be focused on building new games in old series or brand new IP, and I'm happy about that!

The studio sizes are a little inaccurate though, I don't know what the source is but there's no way that MachineGames is smaller than Roundhouse or that Obsidian and Rare are larger than The Coalition, Klob's estimations are more accurate but that isn't broken down into a pie chart, Lol.

Except Mojang is like 600+ and bigger than 343 IIRC, I can't read Klob's disclaimer though but it's probably something like "HQ only" but yeah, XGS and Zenimax were only like 2,500 each, Lol. It's a bit funny that Blizzard alone was larger than XGS and Zenimax combined (and so was Activision).

The on paper developer man power advantage Microsoft will have over all competitors is going to be staggering. Perhaps 2-3 times larger than Nintendo and Sony combined.

The operative words there being “on paper”, however. God knows how many of those developers are tied up in call of duty, call of duty support, and mobile games production. In terms of game and genre diversity Microsoft’s best chance with this acquisition is turning blizzard around

Blizzard has that many employees?! Wtf do they even do? They barely ever release any games, so....what...? They just get paid to show up, get sexually harassed for a while, and then go home?

It's a slight worry still, both Activision and Blizzard have 5,000 employees between them, more than XGS and Zenimax combined and yet Activision can barely release a CoD without putting their entire workforce behind it, to the detriment of original content, then we have Blizzard who is struggling to release a single game.

There could be some serious mismanagement going on too, we've had AB employees say that Bobby and management would often come in, toss them a random project while they're in the middle of something else, only to cancel it later down the line which set everything further back.

I think it's going to take years for Phil to fix their content pipeline.

Not sure how many still work for ongoing games like WoW but I guess it's a lot. Then they could easily have 500+ people working on Overwatch 2 + as many on Diablo. Epic games had a huge growth in employees just because of Fortnite and I guess games like WoW could still need some as well. Microsoft's studios like Turn 10 outsource so much that it's not a surprise to have so many more at a few Blizzard games as the whole of Xbox game Studios

People on the warcraft card game

Diablo 2 resurrected was a great remaster.

Probably because vicarious visions did it...

The online stuff handled by blizzard was dreadful.

Nothing that interests me personally. Just seems more quantity than quality. Not taking away from those who enjoy these. Said it before and believe it. Nintendo still has the better talent and will continue to have higher quality output. Sony I feel has been iffy for some time. A lot of the same kinda stuff to where even with a different name and studio a lot of their games look like the same game. MS at least looks more varied than Sony.