Forums - Nintendo Discussion - Did Nintendo save gaming with the NES?

Did Nintendo save gaming with the NES?

Save gaming, nah. Make it more popular, yes they did. They made it more kid friendly as well.

I'm going to quote myself to ask you the same question I asked others.

The NYC test market was absolutely crucial in returning home video game consoles to the US market.  Between that and winning some critical legal lawsuits, the NES undoubtedly saved it and it's quite clear when you read up on it that another company or device probably would not have pulled off the same feat.

To be honest, my point is more so that the argument that it saved console gaming ignores the rest of the world and pretends it does not exist.

In Japan, the Famicom was already a thing in 1983. So we can safely assume the Japanese would have still played consoles like they did.

In Europe, the opposite was true, and there was no real console market. We can relatively safely assume that the Master System and NES would have sold just like they did; and that console gaming wouldn't have really taken off until the PSX.

So no. Console gaming at large was not saved. Europe's market was non-existant at the time and you cannot save something that does not exist. And Japan's market was unaffected.

Now I still think companies would have launched consoles in the US regardless (if you think a 350 million people market with tons of disposable income and little barriers to entry will be ignored, yeah that is not going to happen). Whether they catch on or not is of course the question but I do think companies would launch consoles in the US regardless.

Microsoft routinely launches Xbox consoles in Japan despite doing miserably. So why wouldn't Nintendo and Sega launch their consoles in the US even if they only sell 1-2 million?

But what really makes me angry is the claim that it saved console gaming at large, which it absolutely didn't. In the US it is at least debatable but not worldwide :P

This will get written off as anecdotal as well, but my grandfather owned an Intellivision.  He was an avid golfer and bowler and had won many trophies, and Intellivision was known for having the most detailed looking/playing sports games of their time.  Mattel was the first console manufacturer to seek out licenses from professional sports associations (NFL Football, NHL Hockey, NBA Basketball, etc.).

Two of the games my grandfather enjoyed playing the most were PGA Golf and PBA Bowling.  He had other games of course like Snafu, Advanced Dungeons & Dragons, Microsurgeon, Atlantis, Dracula, etc.  Anyway, this was a console that he bought for himself and played frequently, not just something that he would pull out of the closet when his grandkids came to visit.  I think if you look at the crux of the Intellivision's library, and the games that made it stand out apart from the Atari 2600, you can clearly see that it was not a console just for kids.  I'm not talking about just the sports games.  Play (or look up videos of) Microsurgeon or Utopia (credited as being a precursor to Sid Meir's Civilization) and tell me which audience those games were specifically targeting.  Children with short attention spans, or adults looking for a deeper mental challenge?  The Intellivision sold over 3 million consoles between 1979-1983, and carved out 20% of Atari's market by the time of the North American Video Game Crash.  Even the Intellivision ad campaigns are reminiscent of tactics Sega (and later Sony) used against Nintendo to show that the opposing console was "kids play" compared to theirs. 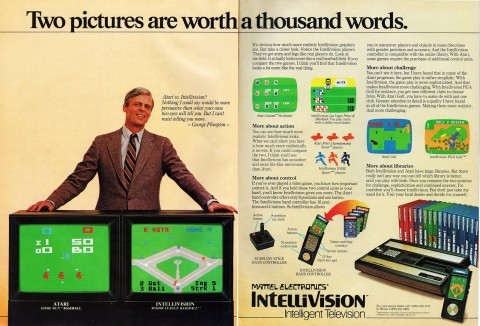 Yeah... It did save gaming, for sure.

As said before, if Nintendo didn't do it, someone else would, as entertainment is part of human culture. But many gaming companies went bankrupt at the time, and everything seemed bleak, then Nintendo came and proved once and for all that gaming had a future.

Myst, the game you kept going on about?It first launched in 1993 on MAC, many years AFTER Nintendo already launched the NES and saved gaming. Hell, the Super Nintendo was already out. Nintendo already brought back the industry and made it more popular than ever before that game you went on. The same was for this Populous.It launched way after the NES hit stores shelves everywhere, since the NES launched in 85 in the Americas and 86 in Europe. By then, the reputation to gaming was already restored and was already walking into it was today, so of course those games did well.

All your examples came after Nintendo fixed everything up. So yeah, they saved gaming.

That is a nice story!

But just it becomes confusing: What I am saying here is that Nintendo brought the industry back from the dead, not invented it. That didn't impede companies having some success before the crash, but nobody managed to actuyll save it after it did crash. Not until Nintendo.

So Nintendo fixed Amiga 500 sales and started Bullfrog so they could produce Populous...
They also fixed Sierra online so they could keep producing mainly PC adventures like they were doing before the 'crash'

Sierra entertainment was founded in 1979, Bullfrog in 1987 but they didn't develop for the NES, it was licensed to be ported to the SNES after the game had won awards and proved to be successful. Same happened to Metal Gear, success first then ported to the NES (drastically altered btw)

Lucasfilm games was doing fine as well (Maniac mansion) also got ported to the NES later (A port for the Nintendo Entertainment System had to be reworked heavily, in response to complaints by Nintendo of America that the game was inappropriate for children)

NES got a lot of (mangled) ports from already successful games. Great save!

Nothing exists in a vacuum. Yeah, Nintendo brought gaming as a whole, and that also helped the popularity of PC gaming, even if on a smaller scale. That also applies to other gaming consoles.

People jumped in/invested in gaming because Nintendo showed them it can be profitable and sustainable, which made poeple make games for both the NES and other gaming consoles(obviously after the NES and Super Mario Bros was a gigantic success).

I should also mention, because it seems that if I don't say anything about everything people don't get it, that while Nintendo saved gaming, it's not like it was completely defunct. Arcade was doing reasonably well and it's not like gaming didn't sell a single copy until the NES came. Their sales were just so stupidly low(even a few million for a console, considering that you needed tyo invest alot, was rather low back in the day) that you couldn't considered that a success, even if there were a few exceptions.

So yeah, yet again, Nintendo saves the day!