Damn hobbits! They're all greedy! Every single one of them!

I think it’s time to start looking at the real possibility of this being the best selling non-bundled/single system game of all time. I can legitimately beating Super Mario Bros’ 40 mil on NES. This is the kind of game that screams huge evergreen seller for years to come, and it had a near 15 mil first week of sales or so. There’s also nothing that will come and steal its thunder since AC is always a one and done per system franchise and there’s no other Nintendo franchise out there that’s remotely similar to it. If switch sells anymore than 120m or so lt, then I think 40m+ lt is definitely on the table.

This article is about digital sales only, not physical.

At first I thought this can't be right, then I read the OP and knew that it isn't right. SuperData, lulz.

EDIT: But hey, maybe SuperData is right on the money and Nintendo announces ~18m shipped in March.

You guys continue to miss the point.

Considering digital on PS4 is around 40% 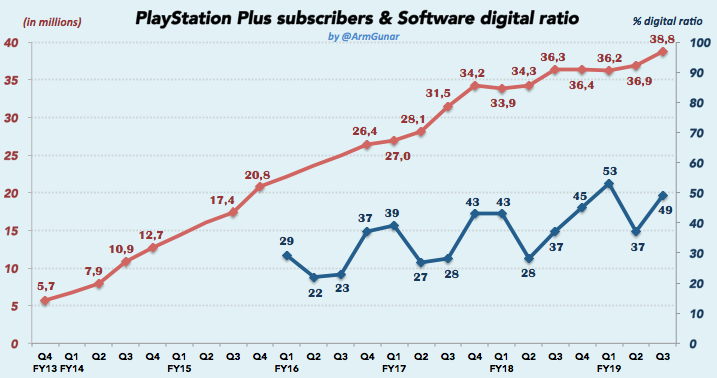 That's 5 million digital in US alone. AC is not even in the same league to launches like COD, GTA or RDR2 (prob FIFA as well).

You guys are a classic case of confirmation bias. Your desire for an outcome has led to you missing all the caveats.

To further drive home how inaccurate SuperData is:

You're completely missing the point. This has nothing to do with how inaccurate Superdata is. Your blatantly false data and incoherent narrative are the problems.

And you should really check your math. To get 5 million in digital sales with a 40% digital rate, you'd have to have total sales of 12.5 million. Not 7.5 million.

AC sold 2.6 million physically in Japan. In the US, it sold enough physical copies in March to become the best-selling game in the franchise, so that's another 2.3 million at minimum. Add in the rest of the world, in which AC usually sells substantially more than it does in the US, and we're already above 7.5 million physical. With just a 25% digital rate, its worldwide sell-through exceeds 10 million in March.

You can be in denial all you want. It doesn't change the fact that New Horizons had a launch month that rivals Modern Warfare.

Superdata at least has a slim chance of being right. You don't.

Regardless if this is true or not, Animal Crossing New Horizons is having a phenomenal run. Even against stiff competition among the likes of Doom Eternal, FFVII Remake, and Persona 5 Royal, Animal Crossing is able to reach audiences that very few games can even fathom, especially women. The social interaction online has allowed the game to be something incredible. Not bad for a simple life simulator game.

It always had the chance to be an absolute sales monster, I'm glad it's come to fruition this time round for AC. Not surprised at all that it's selling this well, it's in with a shot at #1 Switch game ever.

Yep, AC physical sales is absurd. 2.6M in Japan, ~2M in the US, and probably around ~2M for Europe+ROTW during the launch month alone. With Digital sales it's probably not far from COD MW 2019 number.