Realistically, we ought to not expect the Switch's successor any later than early 2024, probably 2023 most likely. That gives it another 3-4 years of primary life. Even if we grant it another five years, to beat the DS the Switch would still have to have implausibly high growth over the next couple of years. The Switch's current sales levels and what growth we've seen out of it simply don't seem very encouraging for it to be able to sell the staggering quantity it would need to sell to close the gap with the DS. Barring some significant sales growth this year, I don't see it doing much more than 120M globally, and that's what I'd consider optimistic.

Yep, lack of power, 3rd party games having better graphics in other consoles or several AAA ports not being made won't really be what decides if/when Switch pass 100M or reach 120M sales.

At this point I'm not even sure if it will surpass Wii sales, let alone DS 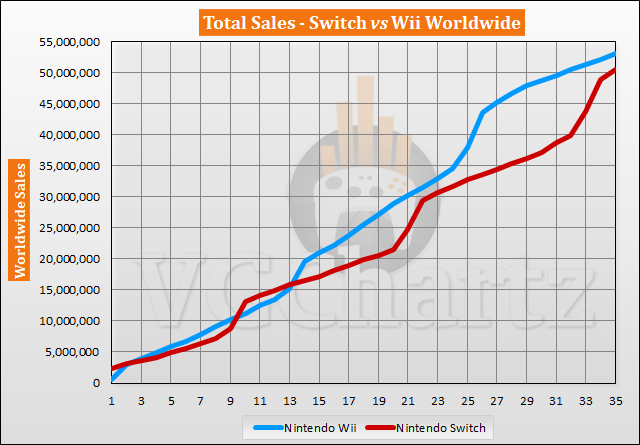 If they make a Switch mini that is the size of a 2DS/3DS XL that you could actually fit in your pocket then it would easily pass Wii sales.  It would have been nice to have it for release of Animal Crossing.  Switch Lite might be a little more portable but I don't consider anything truly portable till I can put it in a pocket.

Agree. But also a new version of the original console with a more powerful hardware and battery might help a bit

I think both will come in due time. I expect 2021 for both, with a more powerful yet more efficient Tegra (probably based on a Quadcore Carmel Processor and Turing GTX GPU) for a "Pro"model and a downclocked version (to OG Switch portable performance) of that chip to be the basis of a Switch mini.

The Wii’s drop will be much worse than the Switch

Switch ain't too far behind, and next year the Wii will go from 300k weekly in January to 150k weekly in October. Switch may not reach those 300k, but will certainly stay above these 150k, and the Wii is only going further downhill from there.

While you may be right, global aligned sales never tell the whole story. First off, the Switch was released in March instead of the holidays like the Switch was, so depending on what time of year these LTD comparisons are it could make the Switch look better or worse than the Wii. So, let's look at the Switch on a regional level, and lets ignore the Wii's launch holiday to compare the Switch's 2017 to the Wii's 2007, etc.

In the U.S., the Switch is trailing the Wii considerably. The Wii sold 26M in the 2007-2009 period, while the Switch sold 17M in the 2017-2019 period. That's a considerable deficit of 9M units, or nearly 35% fewer in percentage terms. However, the Wii started to decline quickly after 2009, dropping to 7.07M in 2010, 4.54M in 2011, and just under 2M in 2012. If the Switch can manage at least flat sales this year and a slower drop-off than the Wii, it could start to narrow the deficit some over the next few years. Still, the Wii sold over 41M units in the U.S., so the Switch has an uphill battle to reach that total. It's possible, but I think a more likely outcome is somewhere in the 35M to 37.5M range (probably closer to the lower end), a narrower gap numerically than the present, but still far from the Wii's total.

In Europe we see the same story. Assuming VGC's figures are reasonably close, the Switch is selling at a much slower rate than the Wii was. After three years, the Switch isn't quite up to 14M in the region, while the Wii sold over 20M units at the end of 2009 (even excluding launch holiday). That's a comparable deficit in percentage terms to the one in the U.S. Assuming European sales stay roughly proportional to U.S. sales, then we're probably looking at around 30M in the region, plus or minus a couple of million.

In Japan, however, the Switch is blowing the Wii out of the water. With 12.3M units sold so far, it's already close to surpassing the Wii's lifetime tally of around 12.7M. The Switch was initially selling slower than the 3DS, but now it's closing the gap, and I think it's likely that the Switch will at least close the gap before the end of its life. So, let's assume 24-25M for Japan.

Between the three major regions, I think 90M is a likely final total. Add in RoW figures and that could bring it up to 100-105M. If the Switch beats the Wii, I think it will be a relatively slim margin of victory, though if it doesn't pass the Wii I also think the margin of defeat will be relatively slim. In either case, it will come down to whether Japanese sales can make up for the deficit in the West.

This is of course barring some unexpected strong future growth for the Switch, but as I've explained in past posts I think that's a highly unlikely outcome. Beating the DS, though, is definitely right out. There's being bullish on sales numbers, and then there's unrealistic expectations.

DS was somewhat of a lightning in a bottle type phenom, especially in Japan where it just caught fire. So no I don't think Switch will outsell DS, especially given the hardware's slew of models and handheld-exclusive focus. Still, I do think it has a good shot of getting closer than most think. Its library is already ridiculous, and its portable nature/multiple models means that some will likely opt for multiple Switches in the household. You also have the price drop factor, which Nintendo hasn't even had to bust out yet. I could definitely see something like 125-140 million when it's all said and done.