Possibly, I'm sure the unprofessional pic and it not being dusted off don't help either. However I think it's the matte over gloss that most makes it look underwhelming. I prefer matte, feels better to the touch and wont get fingerprints all over it, but gloss is prettyful. Not a big deal either way, surely people don't buy consoles to stare at it.

It looks too big.

What is next to the USB at the front? A button? 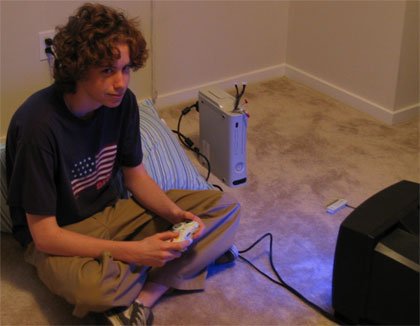 Rumor has it that as punishment he was forced to use that TV for all video games for the rest of his life.

Ngl this thing is huge for a console

Regardless of it being explicitly labeled as a prototype on its back, we all know those appreciated aesthetics are necessarily the same for everyone. -_-

*at certain task to which it is well suited.

Its not just exponentially faster at everything (from what I understand) (supposedly theres task it does alot slower than current x86 cpu's).

Anyways quantum computers, require them to run really cold.... and you need to calibrate it, everytime its shut down or moved.
Imagine everytime you wanted to turn on your console, it would take a few hours to cooldown first,
and lock some of these particles into place, with the right spin ect, before you could boot it up.


Its not practical to make a consumer grade, mass produced quantum computer, for a gameing console.
it would be alot more expensive, bigger, louder, require much more calibration (at each home), and slower for gameing related stuff (most likely).
Its a bad idea, atleast currently, maybe these things change in the future.