Forums - Gaming Discussion - Game Of The Year Blog 2019 - Death Stranding Still Leads - But RE2 Storming Back!

Very much this. I'm gonna be disappointed when it doesn't win it at the Game Awards, but definitely not surprised.

If it has to be something released this calendar year, my pick is Astral Chain. It definitely deserves a lot more attention than it's gotten... the fact the thread poll has Pokémon of all things instead of it is proof enough.

Death stranding by far. To me it goes beyond a game, it feels like a real world when I load up the screen, participating.  Rarely games evoke that feeling. The last to do this was demons souls and shadow of colossus remake.

Updated standings ahead of the Game Awards tonight.

Seems like the Game Awards were pretty spot on with their GOTY nominees judging from the game sites.

I played a ton of games this year so I had a hard time narrowing it down and still ended up with a bunch. So I arranged by tier. The top row is my lower tier and the bottom my top 3. I greatly enjoyed all of them and the kinda hard to see one is Horizon Chase Turbo. 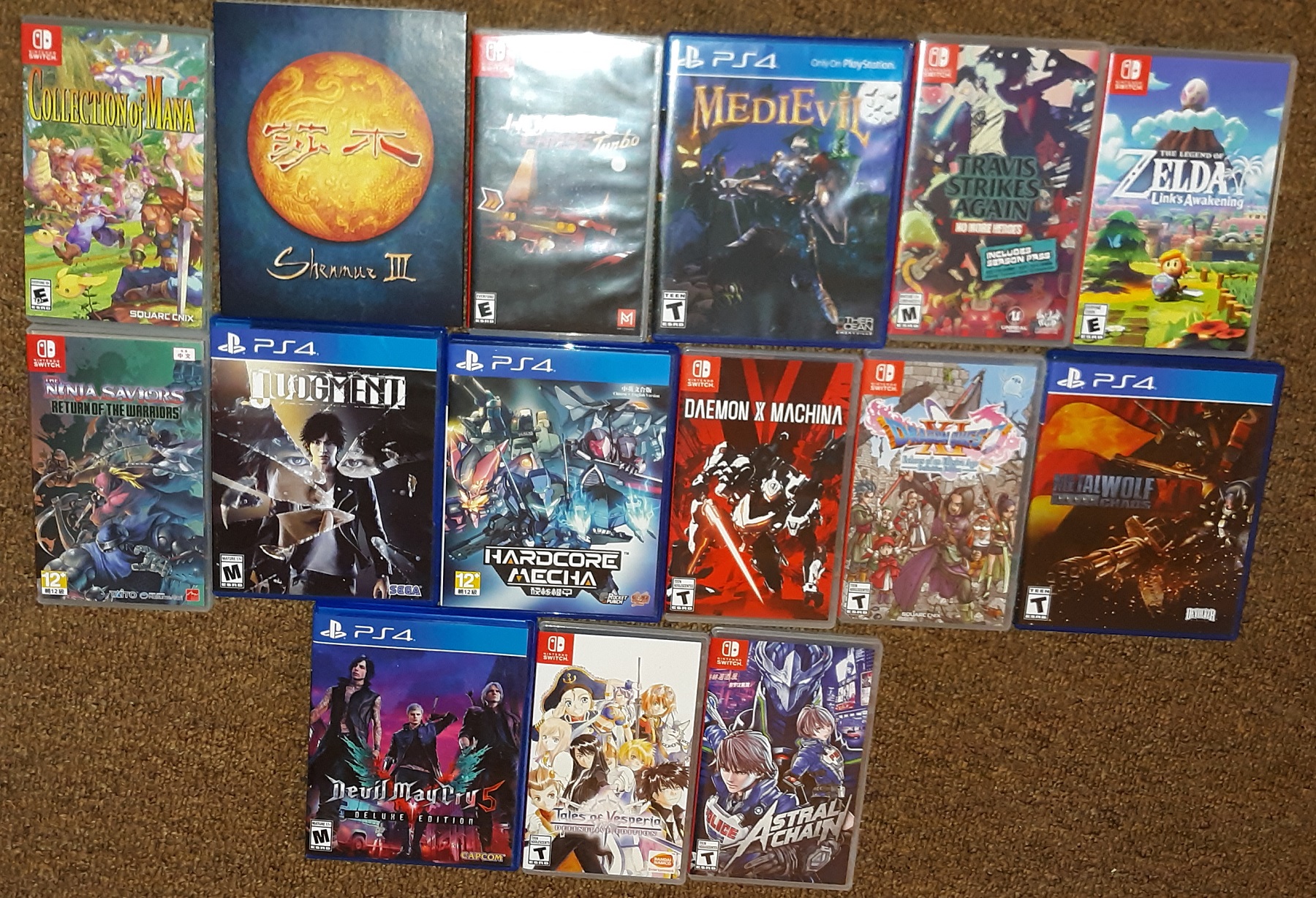 I'd normally rank the Mana collection higher but not fully finished them.

Horizon Chase Turbo. It's the successor to my fave SNES racing game in Top Gear 2. Love it.

Medievil. A full graphical remake of one of the lesser heroes on PS1. I really loved this game on PS1. This is a very faithful remake. I would have this higher but in some areas, it's too faithful. Even the bad camera. I think they should have changed a few things to make this more modern but as it is. Still fun.

TSA I liked a lot but it's rough around the edges. It's a decent spinoff to No More Heroes and a lot of fanfare to past Suda games.

Zelda LA is a great remake to my fave 2D Zelda. It still has all the charm with minor QOL changes. Great game!

Ninja Saviors. A great remake of a good sequel. May sound silly to some but while the OST is good. The first game OST is one of the best in all of gaming. It elevates that game so much for me. I'm not as in love with the sequel as I am with the original.

Judgment. Best game in the Yakuza series since Y0 and Judgment has no direct ties with Yakuza. Stands on its own. The added Ace Attorney and LA Noire elements are great. Plus this MC has a lot of personality.

Hardcore Mecha. Took me by total surprise. A great looking 2D animated game that plays in the same vein as Metal Warriors. Cybernator. It controls so well. A seriously fun game.

Daemon X Machina. It's Armored Core with more personality. It even has a Witcher crossover DLC. It's a really fun game for Armored Core fans.

Dragon Quest XI-S. Easily the best in the series. This version fixes a lot of issues in the vanilla version. From the OST and adding a ton of exclusive content. One of the best looking games on the system. Masterpiece but not my fave RPG I played this year.

Metal Wolf Chaos. This is my kind of game. Overy dumb plot in the best of ways. You pilot a mecha and blow shit up. It's dumb. It's fun. It's brilliant! This is when From Software was at their best when they were nicknamed that Mech company.

DMC5! After over a decade Devil May Cry is BACK! Boy is it. One of the best games in its genre ever made. The best in the series IMO. It looks great. It plays great. Bangin OST. This is the kind of game of why I play video games. How much it makes me smile while playing it.

Tales of Vesperia. I have never enjoyed a Tales of Game very much, yet I always give them a chance. TOV was the game. The game that got me into a Tales of game. Finish it and love it. Then it went beyond that. It gave me the vibes of Grandia II. A game I adore. The cast is great. Yuri is a very unique JRPG protag. He's an anti-hero but not in an edgy angst way. He feels so genuine as does the whole cast. The music is amazing. Visually great. Combat is fun. Great sense of adventure. This is genuinely a fantastic game in every way. I kept coming back it months later again and again even tho I finished the story ages ago.

Astral Chain. It's never a bad thing when DMC comes out and a new Platinum IP comes out the same year. Astral Chain is an action game yes but it plays around with it. This is very different than past PG games. You have investigation sections. Stealth sections are fun. Dungeons in the Astral Plain that play a little like a Zelda game. Big bosses as always by PG. Tho you control 2 characters at once at all times and there is no light and heavy attacks. Your human character attacks with a trigger button. You use a combo if that and the analog stick to control your Legion. You have up to 5 legion and each has a different ability and class. You have segments you must ask around to collect witness stories and evidence. The story is batshit insane and is basically Neon Genesis Evangelion light. It's so uniqe that I had to put it above DMC5 as my no 1 fave game of 2019.

These forum votes always tend to lead to be as more popularity vote than an actual judgment. I can assume a lot of the voters don't even care or have played some of these games yet will vote for there favourite brand instead because console wars.

Death Stranding for me. It's not only the most creative game of the year, it's also got a message that frankly the world really needs right now.

DMC5 for me. Imo, you won't find another game out there that combines its sheer depth and complexity with the level of style it presents itself with.

Dmc5 the best in the series?? That's a big call.. Even better than dmc1 the original? the masterpiece by the creator of the original resident evil series??  I have dmc5 byt yet to play it. I will and will come back here.