Them "fixing it" was just damage control after all the backlash.

TBH, this is Bethesda we're talking about, so could be poor QA, project management, or something similar. It sounds like an external company did the ports (at least for the third game, so I assume that to be the case for the first two as well), so it's possible Bethesda signalled the intent poorly, which resulted into this mess. My money is on Bethesda on trying their luck instead, but since it's Bethesda we're talking about, incompetence too seems like a plausible explanation.

Even if it was a "mistake", the fact that they desired to add a network account request into 3 games, which never had the same network authentication types decades ago, still isn't required, nor should they be "optional", because we shouldn't need Beth only networking, not when we've seen the 3 consoles and PC handling their own networks independently.

Beth doesn't need anyone to sign up for anything, "goodies" or not. If it's an always online based MP game, a la Fallout 76, then I can easily imagine their need for people to register to their network and make an account, in order to gain access to said game/content.

These 3 games are offline based, and do not really require an always online type connection.

Sure, Beth screw up and poorly handle things from their end, but things like paid mods and simply not adding in human NPC's into an obvious MMO, isn't some accident or mistake. Look at the countless times Todd Howard has been shown lying to consumers. I highly doubt 99% of what he says is something akin to mere mistakes or accidents. If we use poor handling from a publisher and poor coder logic, then I'd love to apply this to every other publisher, because I'm not one to pick favorites with this logic, because I know we're not always cared for to begin with.

I don't know, I'd have an easier time believing they "accidentally" leaked people's credit card/personal info with the duffel bags debacle than I would believing they "accidentally" typed "A Bethesda.net account is required to play this game" into the game's coding, especially since it appears on the game's store pages. They actually hid it at the bottom of the PSN page thinking nobody would see it, sounds pretty deliberate and underhanded to me. Again, shit like that doesn't get coded in "by accident", all signs point to it being intentional.

Sure, I agree there's no need for online-anything for these games. But it's not entirely implausible that Bethesda really meant for this to be optional because they thought it makes sense for whatever reasons. It probably makes sense for Bethesda, and if it's optional, even I would probably not mind it (although I would probably think it's fairly pointless). Anyway, this whole thing seems like a mess that could (and should) easily have been avoided.

Yes, that is why I wrote what I did. I deliberately avoided calling this a bug or a programming error because it's almost certain that's not what this is about. The part that makes this a possible error is that when Bethesda hired whatever team to do the port, they might have miscommunicated in a way that resulted in the team believing it was meant to be mandatory when Bethesda might in fact have meant for it to be optional. Even if the team got the intent right initially, it's possible it got twisted somewhere during development. Like I said, I don't believe that to be the case and I think this was intentional, but it's not entirely implausible it really was an error.

But how could that be possible, even though it is someone else handling the project, Beth would still have to give a final say, a final overlook, before it is ready for launch, and we know they cannot do this completely blind, without at least some form of input from their end and a final resulting acceptance, that the games were in a state to launch. They must have known what they were doing when they gave their final word and greenlit release schedule. They had to have known what was going on with a network requirement, that feeds directly into a service network, which they own and operate.

Think of it this way, imagine you're running two offices, totally deperate from one another, but you still oversee office B from office A. Office B creates a project that requires the use and operation of the network service that office A owns and runs independently, but still requires the permission and input from office A, before anything can begin, let alone finish. If office A is informed, they allow the usage of their network and allow office B to begin their project, to make use of the network service provided by office A. Office B then finishes the project, and office A can then give the go ahead and maintain their network service, while overseeing how it is used by office B.

You must see that when someone operates a service like Origin, Steam, or any other client based network service, that the owners have to know exactly how it is implemented and when it is to be used. You don't just hand over network service usage blindly, and on a whim, without knowing what it will be used for. This is why I truly believe that it wasn't a blunder, and that it was never really meant to be optional, because why make it optional, when it was never even meant to be added for 3 games, 3 of which never needed such an ultra specific network service like Beth.net. They could have easily done what Nintendo does with Minecraft, in which you can just play with fellow ninty users. At least MS allowed it to be optional, to switch between XBL network service usage, or Ninty's own network service, but in this case, we wouldn't get a choice, as it would be using their network service, or not buying the game at all.

I could look at it in a myriad of ways they could have gone about this, but the reality is that those games didn't have it back then, why should they now?. If it's extra goodies for fans, then why not straight up add them directly into the games themselves, so they wouldn't require you to add to their total users using beth's client service user stats?. You can add goodies to a game without having to register to a specific network, we've seen it play out like that for years. It just doesn't make sense that they made a mistake, or for it to be optional, when it really wouldn't serve a higher purpose to being added in the first place.

DOOM 1-2 are really ancient games, and they could easily run on the big 3's own independent networks, without having to sign up to beth's network service, and we know this, because before cross-platform additions, the big 3 managed their own network services themselves, and still do.

I said it in another post before, but I do have a Beth account, yet I feel there is zero attachment to it, and thus I strongly feel like I'd have not much use for it. If they made it as important to me as say Steam or GoG's registrations, then I'd likely see them proving more useful and valuable to be if they presented something of value, that would entice me to use their service. So far there is nothing, and even what they currently have, I'd actually have to pay money towards it, which is the complete opposite of giving me value.

This is Bethesda we're talking about. They're not exactly not known for good QA, and I think it's fairly plausible that they accidentally approved mandating a Bethesda account for the games. It's possible the approval process mainly focused on other things, and a small piece of text when starting up the games was missed/not read carefully enough. Again, I don't believe that to be the case, but it seems plausible to me.

I'm not saying using Bethesda's service itself is an error either because it most certainly is not, but it might be an error that it's mandatory. Bethesda wants more users for its own service and wants to integrate existing users better into their service, so from Bethesda's standpoint, using their own service instead of XBL/PSN/whatever makes sense. It's utterly useless and annoying to me, but it makes sense for Bethesda (or at least they think so) so they do this.

As a kid I was not allowed to play any games that featured realistic (that's "realistic" by 90s standards) violence, so Doom was strictly off limits.

Much later, when I became an adult, I started to go back and buy for myself all the games (and hardware) I wanted as a kid but never got, and one of those was Doom on SNES. Yeah, at that stage I probably would've been better off getting one of the many superior versions, and indeed I did, as in that same phase I bought Doom 3 Special Edition that came with Doom 1 & 2 included, but since as a kid it was the SNES one that I wanted (as that was the system I grew up on) I just had to have it haha.

It may be a bit of a chore to play nowadays with its low framerate and blocky graphics, but as someone who is fascinated by the technical aspect of video games I still find it an immensely interesting port, as it's one of miracle conversions that on paper shouldn't be possible.

Seriously, what's gotten into Bethesda? They've pissed away their reputation overnight with so many fuck-ups, first releasing a broken, buggy, half-baked Fallout 76, then scamming people with falsely-advertised duffel bags, then leaking people's credit card and personal info when ordering said duffel bags, then releasing a half-baked 10 hour Wolfenstein game laden with microtransactions, and now this.

And what's sad is: some people actually believe them when they said they accidentally coded in login requirements and DRM for a 26-year-old game that they didn't even make and deleted the backwards-compatibility 360 versions of classic Doom games from people's libraries after getting caught with their pants down YET AGAIN.

Yeah, no, like I said, that shit doesn't get coded in by accident, anyone who knows how programming works knows this. The fact that it appears on the game's store pages proves it was intentional. Then even hid it at the bottom of the PSN page, thinking nobody would see it, sounds pretty deliberate (not to mention underhanded) to me.

They're turning into EA/Acti. I guess that makes sense, after all, you can't spell Bethesda without EA.

And on that note. 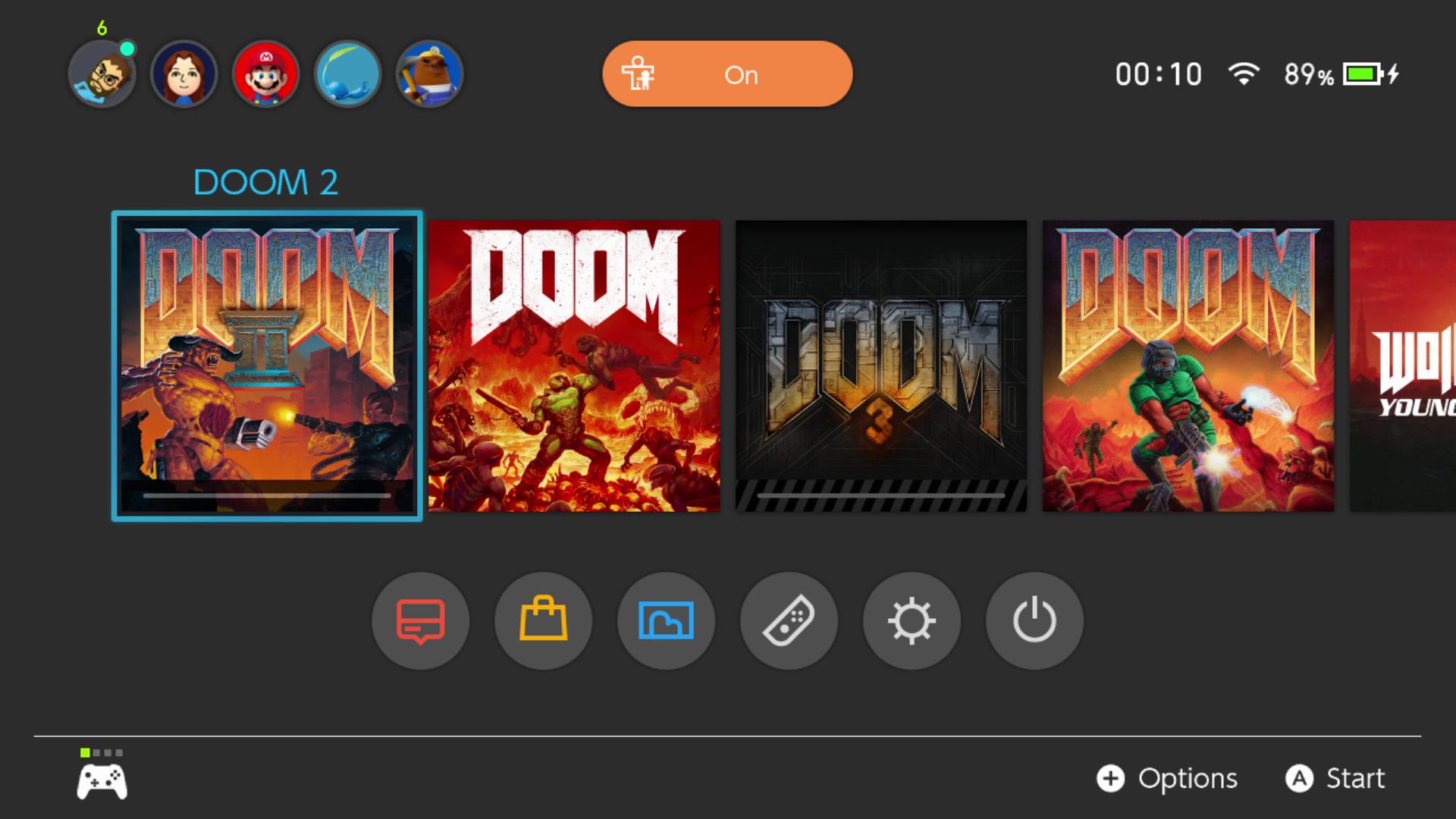