Rumor is Anaconda will use the next AMD GPU generation after 5000 series, the generation that will release in 2020.

Not sure what Lockhart will use though, probably Navi/5000 series, but much further down the scale than 5700, maybe 5500.

Don't worry. I know You are a XboX lover.

I don't care the rumour lol. 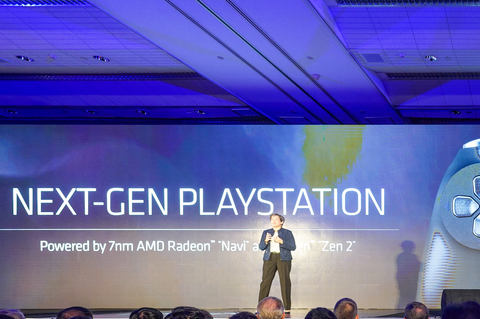 Pretty much. Just like Polaris.
I will likely still pick up one though.

25% IPC improvement is pretty inconsequential considering they are moving to a new process.
The jump between Fiji and Vega was anywhere from 5-30% as well.

How do you know Navi's size? Anandtech pegs the GPU as a monolithic part.

As for pitting it up against nVidia... Navi only bested the Geforce 2070 by 10% in a title that favors Graphics Core Next.

Either way, it improves upon the prior parts, but not massively so. - It's still a win for the consumer though if AMD can assist in bringing nVidia's prices down.

Finally some next generation midrange GPUs people can put in their consoles.

Well they already did since Atari came in 70 until now and until foreseeable future . Console is just mid range GPU.

I don't know the die size, Lisa Su said it was small on stage and I assume it's a midrange card putting it about 200mm2.

Yep amd has about 18% advantage in Strange bigarde so its average performance should land a bit below geforce 2070 but I think this is a cut-down card. A sapphire PR spokeperson said amd will be launching 2 cards in july, a $400 card and a $500 card, so this fit perfectly with the $400 card. It wouldn't make much sense for amd to launch this for $500 if it has less performance than geforce 2070 but the same price.

Edit: It looks like Nvidia released a new driver in April that improved performance in strange bigarde by 15% in 1440p and 25% in 4k so we're not sure what we looking at.

Looking at game benchmarks again, this card should land slightly below geforce 2070 in average benchmarks if amd was using nvidias latest drivers, Amd just had a much bigger advantage in strange bigard than I thought. This is average benchmarks on the site techpowerup. I hope they are not planning to sell this card for $500.

I was an Nvidia user, but my old GTX 670 needed updating. Managed to get an incredible deal and snag an RX470 for £70. Really happy with it, so I'll probably upgrade to one of these in a year or so.

Polaris, when it came out as the RX 480, was pretty good - just not the high-end chip everybody was hoping for, but a mid-range chip. It did keep up with Geforce 970 in performance/watt and performance in games. It just couldn't keep up with the 980/980Ti/Titan, and Pascal destroyed it in terms of performance per watt one year later.

I think your vision of Polaris got skewed by Maxwell and Pascal, where NVidia leaped so far forward that AMD couldn't nearly keep up anymore, but kept rehashing the chip as they had nothing else apart from Vega to show off.

And while 25% IPC increase is not 25% increase in performance, it should come pretty close at the same clock speed and CU amount. Also, don't forget the 50% reduction in power draw at the same time.

So yeah, it will be like Polaris, a good mid-range card that can keep up with it's peers from NVidia at it's release - it's just not the high-end card to compete with them at the top.

AMD cards seem to age very well (better than nvidia counterparts), which I suspect also partly comes down to their drivers not being at as good a state, early in the life cycle as nvidia cards (when launched).

From what I read they're not 10% ahead of the 2070. That was a benchmark that favors their architecture. Estimates seem to be slightly below the 2070 on average. Which is ok I guess. It's not like they were striving for high end.