Unless they are lying on purpose to hide the fact it leaked before it should, yes, as the leaker, Sony and Take Two said it was not happening.

Totally thurstworthy. With this all Happy Meals will come with dvds of disney classics.

And all Disney characters will become fat by eating exclusively on McDonalds.

Possibly, but then again when you look at how MS locked down PUBG, that didn't exactly hurt them, instead it actually made things better for them. Now PUBG hasn't remained entirely exclusive, but because of competition, becoming completely multi platform didn't help all that much. Something else to take into account, is that PS tried to tie Fortnite down to PS4, but in a manner that still allowed the game to be played on all platforms, yet it was a 'major' problem, but PUBG wasn't for the most part? I think too many people are giving MS the benefit of the doubt just because they are playing catch up.

I don't see PS forcing games out. They've done nothing but delay and extended their first party offering's to make sure they are good enough by launch, otherwise why bother botching them and ruining the whole investment for 6 lousy months or whatever? When a game takes 5 or 6 years to make, another 6 months is nothing unless your desperate.

PS has stayed on their desired path for the most part so far, but little by little the doors seem to be opening. At the every least, it seems like PS is trying to make their library open to more devices, and It's hard to believe some of those devices won't be new future PS products. PS will have no choice in the future but to become as open or more as MS is becoming with everything, or they will have to make sure they can offer their products on as many worthy hardware platforms as possible, theirs or not.

Just create a new GTA or RDR? You make it seem like anybody can just wake up one day and do it, or just because MS has boatloads of money they can do it. All you have to do is look at the history of XB and all the money in the world hasn't made them #1, and they're not far from becoming #3 in the console space as of now, by a product that's had less than half it's time on the market. MS has acquired more studios and outside talent, but while that is necessary to get them started and headed in the right direction, to assume these new copycat titles MS would come out with would hold a candle to franchises like GTA or RDR is a fantasy. That's not to say they couldn't be fun and do well in their own right, but there is good reason no one has bothered to seriously try and compete with Rockstar. When MS says they are going to try and copycat HZD, that makes sense, because it's a brand new hit, and isn't established, so MS has a chance to somewhat easily grab some of that audience, similar to PUBG. That time has basically long past for anything related to Rockstar titles.

Game and Network Services for SNY is at the top of the earner's for them along with financial. Gaming has shown the most growth for them by far as well. In 2014 it made up 7.5% of the companies total income, where as now it's 18%, and financial is only up a couple percent to 11%. With MS looking to gear up against them, and Nin making another big comeback, if SNY doesn't do whats necessary to stay well ahead, they will see that 18% slide. You spend your money where you think you can make the most in the future, but also what's making you money now. Gaming fits both those requirements so there's no reason to think SNY won't spend a hefty amount to keep it's cash cow well fed. Maybe there's cheaper more efficient ways to do that, maybe not. Too much focus on titles 'starting from scratch' in the gaming division, will take away focus from other parts within that division, as well as others within the larger corporation. It might be better to spend the money, make minor changes, and have a small, equal focus on Take Two IP.

Part of the problem with Fortnite is that PS didn't have full control. They really had little control, considering it was not only third party, but F2P. If PS had the same control over Fortnite that MS did with PUBG, they wouldn't, or shouldn't, have had the same problem, because MS didn't for the most part, so. MS played PS like a fiddle that round. Not only did they scoop up PUBG, but they turned gamers against PS with cross play/accounts on Fortnite, an F2P game, something MS locked behind a paywall that PS didn't. I gotta hand it to MS, they really got PS good that time. Shame on PS as well, because they could have handled that so much better and at the very least dispersed the negativity for that matter.

The shareholders may very well only care about the extra they will make from the buyout. Very likely so I would imagine, because it has been on a steady decline for a while now, plus if Take Two stock now falls under the SNY brand and it's stock, while it'll be more secure and stable, it also won't see the gains that Take Two's stock did. SNY stock doesn't tend to fluctuate too much. If I were a Take Two investor, I would sell during the buyout, no doubt. As for the brands, all will be fine overall. If you want GTA or RDR, your going to have to buy a PS device or service if exclusive. This may not happen with dedicated hard core gamers who are upset, but those brands have grown to a level where they only require the masses now, and they don't care too much about platform, they just want those games. All PS has to do is make sure what they already offer meets or exceeds expectations, and it will draw people in, including the hardcore, even if it's not for or against Rockstar games initially. While I agree corporations are always pushing to make more money, sometimes you have to flat line if not take a hit, to make sure your ready for the future due to competition.

While I don't necessarily think exclusive would be the best way to go overall, while SIE titles like HZD and GOW are system sellers, they wouldn't hold a candle to what GTA and RDR would do for PS console sales if they were exclusive. This could even be seen as a way for PS to potentially try and push XB out of the hardware market and solely into online services. 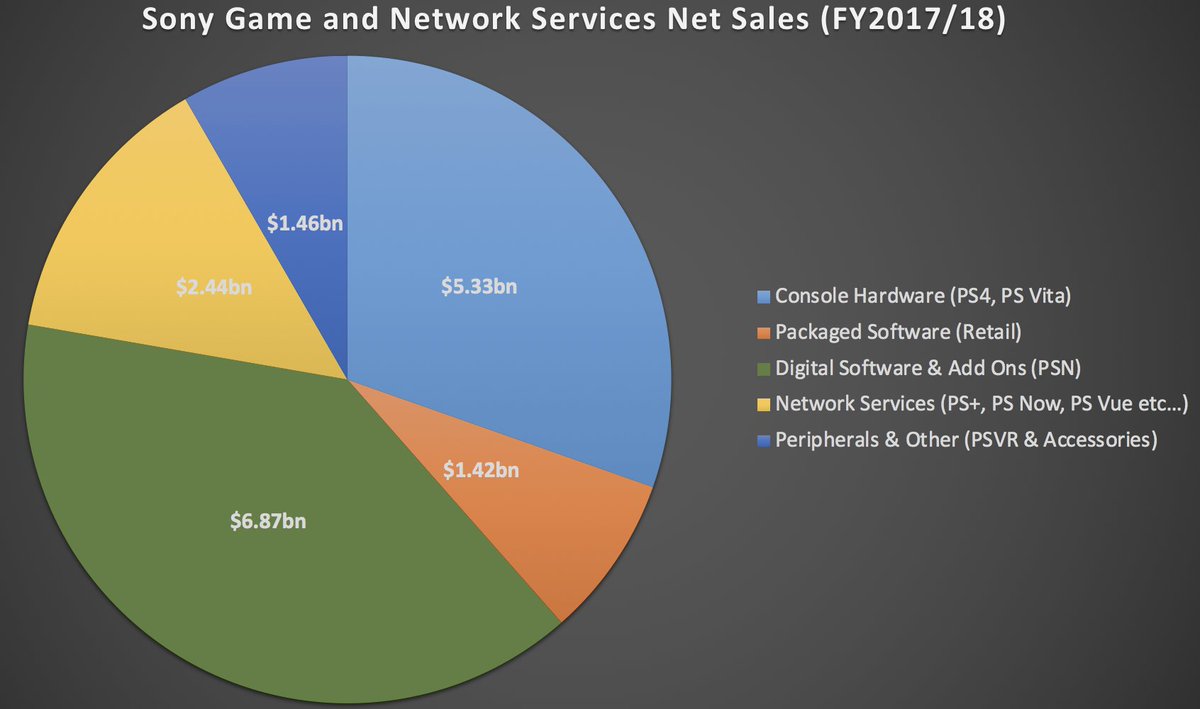 Well for starters MS probably spend just as much money in there gaming devision than Sony. MS invest in what they believe they will make back, thats why they are where they are in the food chain.

How many companies have tried making a GTA game? Its a big investment and there isnt a need to because we have a company already doing it. Any company can make a GTA game, weather it be good is another story but a big investment in the genre will create something atleast half decent and who knows, might be better. If GTA was to be locked away to one plastic box than expect a new openworld IP that the competitors will invest in.

Keep in mind that console net sales of $5.33bn probably doesn't include the expenses to make the hardware as RnD for console projects have been near the $3bn mark on the low side. So if you subtract take that away from the net sale you will notice it doesn't leave you with much. And that's if the PS4 cost $3bn to make, could be 4 or 5. The PS3 was around the 5bn to 6bn mark as a guide line.

EDITED - And just to add to the poster below, Anyone can make a clone game, If a company like MS want to spend money to make a GTA/RDR clone they very well can. They haven't and they don't plan to as we know. But any company can do it with the right amount of money behind the project. Lets not kid ourselves and think that because MS are richer as a whole equals they spend more on developing games and that there games are mediocre = MS money means nothing. Money means something when a company actually spends it. MS don't or haven't invested major in there 1st party departments for quite some time now and the games that came out are normally around the business average to make. If Sony brought Take-Two for $10bn, MS will spend $100m and make there own GTA game and promote the crap out of it which will put pressure on the $10bn business decision that would have made. Weather a clone will be better than GTA will be assumed as no body will know until it actually happens. So lets not talk about current games to future games. At one stage Sony couldn't make great games either or were a dime a dozen. Things change.

MS have made such great new IPs this gen that is totally believable they would make a very competent GTA and RDR clones.

You’re making comments about how little others know about business but then making your own comments proving you don’t know much yourself. I mean look at that last part there you just said about Minecraft, “didn’t had assured return of that in profit”. MS didn’t buy Mojang expecting a quick return of that 2.5B investment. They bought Mojang because they figured Minecraft would make them more money than that 2.5B would collect sitting in a bank earning interest.

Just goes to show the gargantuan difference in funds we’re talking about between the two companies. Sony has a lot less to spend, and a much larger focus on video games to the company as a whole, thus anything they buy must make a much bigger positive impact than MS buying Mojang. Plus the purchase price would be four times as much, minimum.

Not a very smart comparison if you know a lot about business, which I certainly am not claiming that I do, but when you say some people here know “0” about it, that implies you do know a bit yourself.