Not to long ago Britian was the 5th largest economy in the world (I think it was?), then brexit hit.... its now (resently) I think it went down to 7th.

Financial services (services) are a HUGE part of the british (UK) economy (~80%).
They are going to take a heavy blow, because they likely wont get equivilence with the EU sector.
(uk are trying to get out of laws that make it hard to hide tax's, and instead become a tax haven)

Stuff like loseing "Carbon emissions contracts" handling, is worth on its own $1,2bn+ pr year.
(thats heading to Holland (amsterdam))

And its just the tip of the iceberg.
It'll get worse before it gets any better.... ei. UK is gonna keep loseing parts of its economy to EU for a few years to come.
(every other day, it feels like you hear about another bussiness either under, or moveing to a EU country)


People forget how poor the UK was before it joined the EU.
It used to be called "the sick dog, of europe" (by other members).

The same way we (most europeans) view poland, is how the UK used to be viewed.
Really poor, willing to work for nothing, used for low qualifed jobs, at low wages.
UK used to have a big bussiness out of doing labor jobs, building contracts and the like.
(need a house built? or a bridge made? hire from the UK, they have lots of cheap construction workers)


EU gave the UK very favorable conditions, and in turn, the UK grew prosperous.
At the same time, they love to blame EU for any and all issues, they could ever have.
Decades of this scapegoating of the EU, has led them to blind their own people towards the truth of the matter.
Now some rich bastards, convinced 51,8% of their voters, to vote against their own intrests.

Who profits from Brexit?

The Rich in the UK, from disaster capitalism.

They used "eu scapegoat propaganda" (decades worth) and told lies about costs/benefits (with lies written on red busses too even), and sprinkled with a little xenophobia, to convince the poor sods in the UK to vote against their own intrests.

(UK economy will not be better off (esp for the poor), for brexit. They knew this, but mis-lead and counter attacked anyone mentioning it, by calling it "project fear").

I will wait for another studies about the AZ vaccine vs the SA variant before making any judgement. Also I wouldnt trust so much studies about russian and chinese vaccines.
Anyway, the virus will keep on mutating and vaccines will get obsolete with time hence why I think we will have to be vaccinated every year. Also I dont think pfizer can deliver vaccines to the whole world and also the logistics with mrna vaccines is very complicated. So we will have to rely in other vaccines even if they are not as effective, especially if they protect against hospitalizations and death. An there is nothing that guarantees that the mrna vaccines might not get obsolete with a new strain from somewhere.
I totally support UK decision to move ahead with the AZ one if it means it will provide protection even if limited to people. Then by autumn we can have an updated version of it. In the meantime, shut the fucking borders. 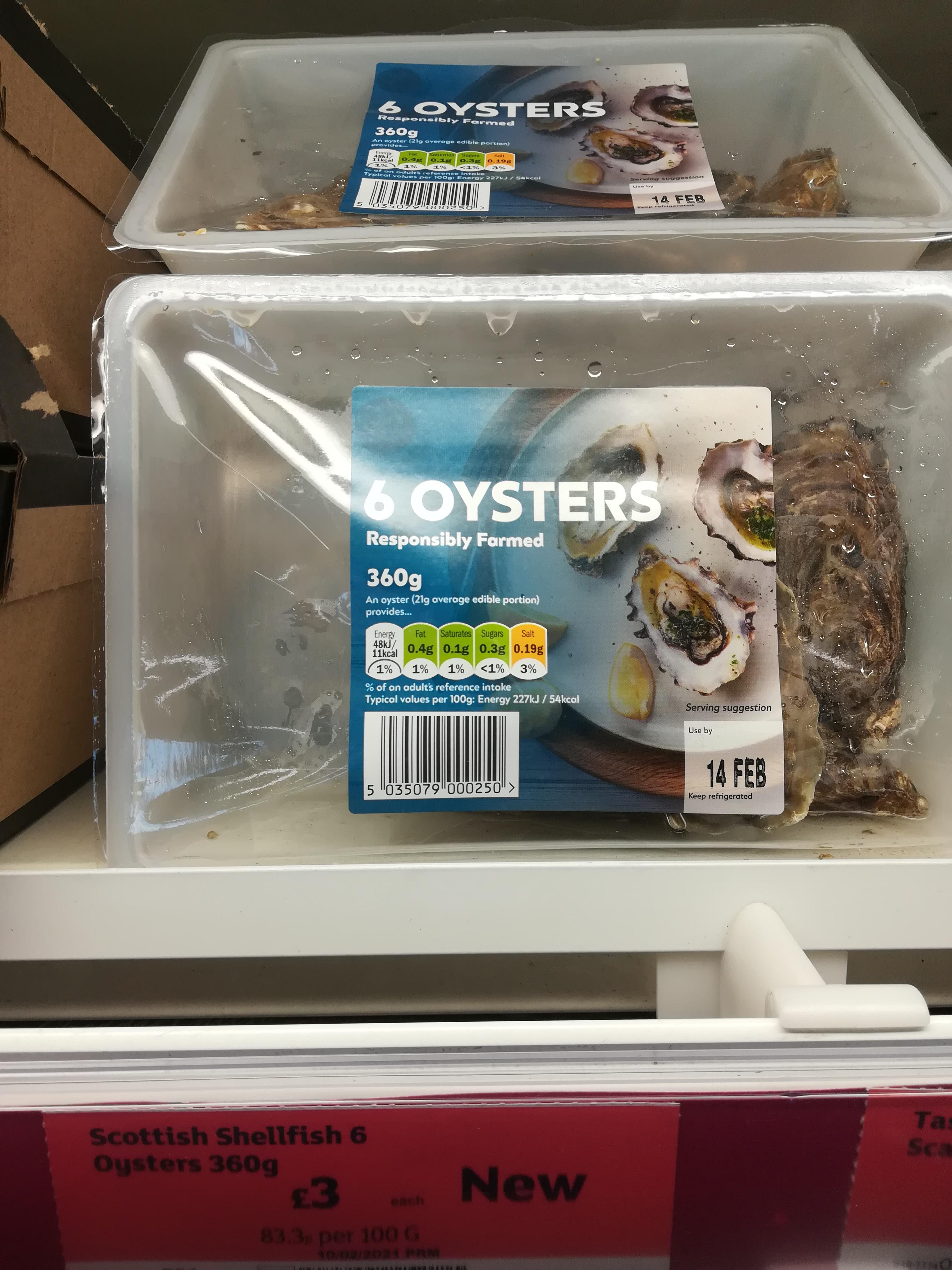 On the bright side.... you can now buy (cheap) "rebranded" British oysters in super markets (sealed in a plastic package, vaccum sealed).
(the idea, is since EU are the main market, abit of marketing, and maybe you can get more brits to buy it)

They are not fit for human consumption, according to the EU.
Apparnetly, the water in the UK is some of the worst in europe (toxic/sewage ect).
The EU have plants were they are cleaned, so it isn't a issue when you eat them (its raw seafood, you want it clean).
So what normally happends, is they are cleaned, then stored abit cold, and sold alive to you the consumer (near were they are cleaned).
(typically only last 3-4 days before going bad)

Getting a plastic (vaccume packed) oyster thats likely dead, and not processed (cleaned)..... is asking for food poisoning.

But good on them, for thinking of a solution to the oyster fishermen, that are haveing a hard time in UK/scotland ect.

Just looking at the package should tell you they aren't vacuum sealed (unless those trays and films aren't in kevlar-carbon or even stronger materials to resist so well being sucked in).
About safety:
http://www.shellfish.org.uk/faq.html

PS If you really wanna make examples of unsafe UK food, I'd suggest poultry and eggs, it would take Italy decennia to have the number of salmonella infections UK has in one year. But they had them also before Brexit.

So not 100% airtight... still surely being sealed in like that, makes it so hard to breath they die due to lack of air? no?
Also the UK doesnt have the proccessing plants to clean them, so they are still full with toxins/sweage, and are fished from water quality, thats poor, and thus unfit for (safe) human consumption (atleast according to the EU).

Why does the UK have large amounts of salmonella infections compaired to other countries?

Anyways, EU are big on food safety..... excessively so? I dont know.
I've heard americans say that when they come to europe, they can actually taste that things (they know) taste differnt (likely due to higher food standards).

UK has purifying plants, but not enough for export
https://www.bbc.com/news/uk-politics-55903599

About breathing, fish and other seafood breathe oxygen from water, so how long they can resist outside of water depends just on how much water they can keep, external air, without waves and other turbulent water motion will be dissolved in water in minimal amount. Keeping cold blooded live seafood at the lowest temperature they can stand is probably the best that can be done to keep them alive longer.

About salmonella, dirty breeding farms, dirty processing and not removing quickly ill and dead animals are the most probable reasons.

When my mom studied for some time in England for her degree in foreign languages, she and her roommate, after days of eating milk, eggs, yoghurt and bananas to save money, decided to afford the "luxury" of a roast chicken, but they were so disgusted they had to give it to stray cats: it still had the final part of intestine, with shit inside.

EU is sometimes excessive on the opposite side, but just when it hampers the production of traditional and typical foods, that can be perfectly clean and safe, but with a wider range of bacteria, harmless if they don't go out of control, than those allowed by EU laws (France had to ask for exceptions for some typical cheeses and sausages, and they saved Italy too, as when this happened we had ministers so clueless on these matters that they said there was nothing they could do to save some products, like "lardo di Colonnata"), but it's perfectly right when it does its best to prevent thugs from preparing food in a dirty and unsafe manner just to save a few cents.

If there were, there wouldn't have been any Brexit and Farage and Reese-Mogg would be rotting in Jail for a long time now

My wife could confirm this (she's from the Philippines), saying things taste very differently here than at her mothercountry. And I agree also, some stuff which I eat regularly in Europe tasted plain weird in the Philippines.

The cope in this thread, lol.

Euroland acting like it has a choice over which vaccine to use. The EU is only using the Pfizer vax for over 65s because they don't have enough AZ vax. They can't rollout even if they wanted to. They're trying to save face and pretend it's being done due to lack of data meanwhile every vulnerable person I know is now protected from serious illness/death from Covid. They just have to be careful with shellfish apparently.

It's sad seeing Ireland take the brunt of the EU's silly vaccine and trade restrictions. Can't believe the EU actually brought back a hard border. I thought the UK would be first to break that agreement. Hopefully Ireland can get some consolation from being the first EU country to be vaccinated assuming the UK gov follows through on giving our spare vaxes to Ireland first.

Of course there's lot of cope here, with all the Brexiteers with buyer's remorse now that it turned out that all the UKIP and their allies had were lies, damned lies and statistics with a side of hot air.

And then there are those who are either too blind or simply don't want to see the truth in front of their faces and continue to defend Brexit no matter what and bending and breaking the truth to massive extends. And calling it coping when others point out that the Brexiteer arguments simply don't add up.