I wonder if there ain't some small bug in Steam's survey or their database concerning AMD GPUs.

AMD Radeon Graphics are rising steadily at a pretty fast rate, but some low midrange cards like the 6600(XT), are still at 0% after almost a year despite selling relatively well. Checking the sales numbers at mindfactory.de for instance gives for both of them together a total sale of way over 9000 (over 13600 in fact, which is quite a bit more than the 6800, 6800XT and 6900XT numbers combined and more than the 6700XT), and that's just one store in one country.

That's why I suspect some cards are falsely flagged as either "generic" AMD Radeon Graphics or fallen under the DirectX 8 GPUs with some wrong readouts or false database allocation, because there's no way in hell that those make up almost 5% of all GPUs these days.

This doesn't mean NVidia isn't also affected, but from seeing their numbers and the fact they rise up quickly after release, I suspect that they are much less affected by this than AMD GPUs

Yeah, we are suspecting that for a while now: 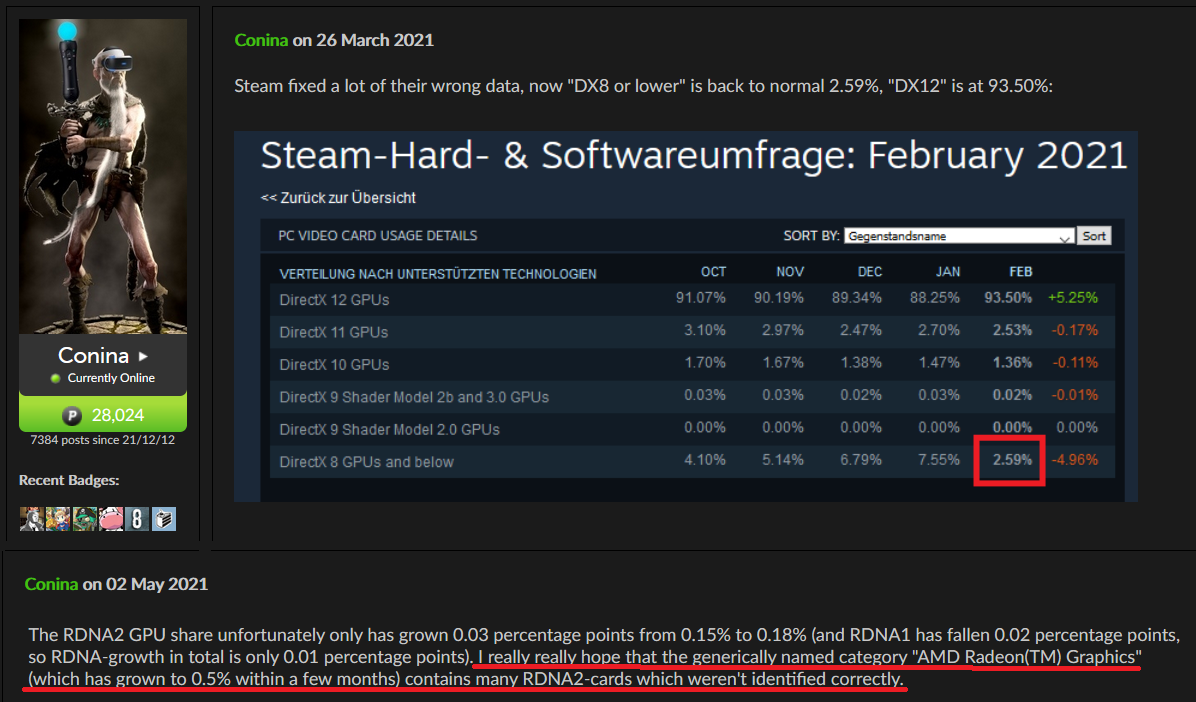 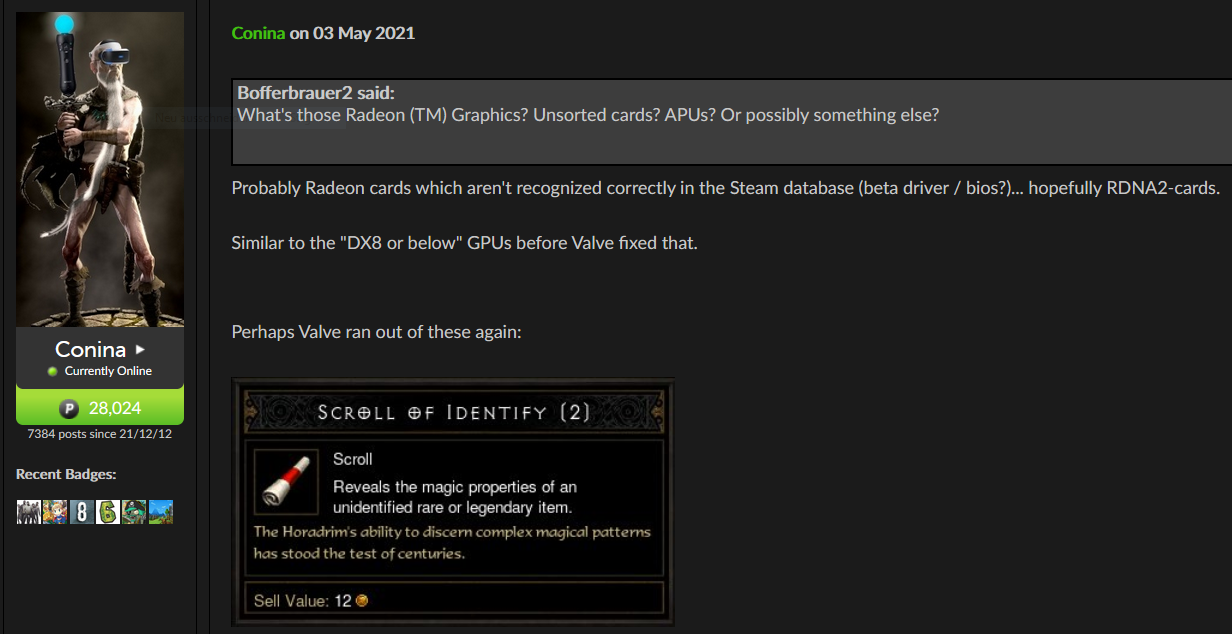 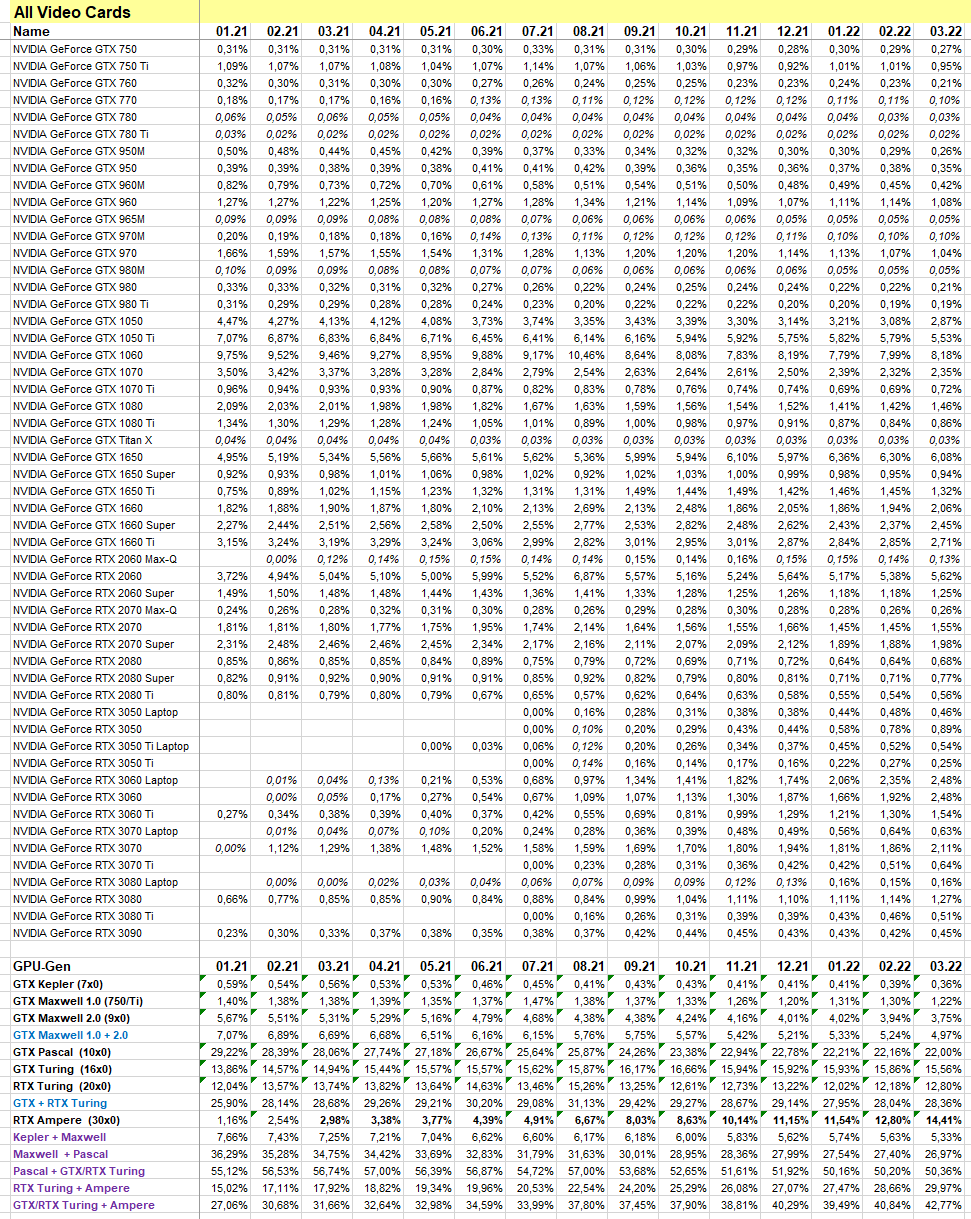 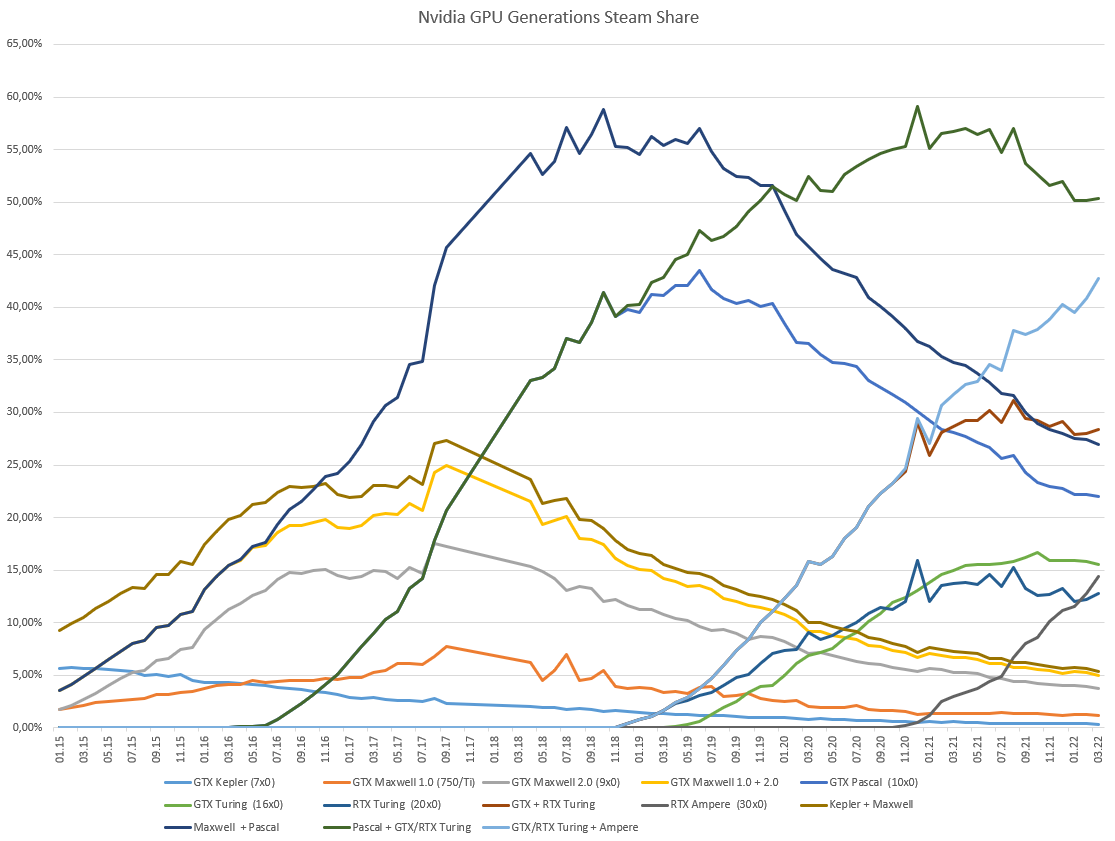 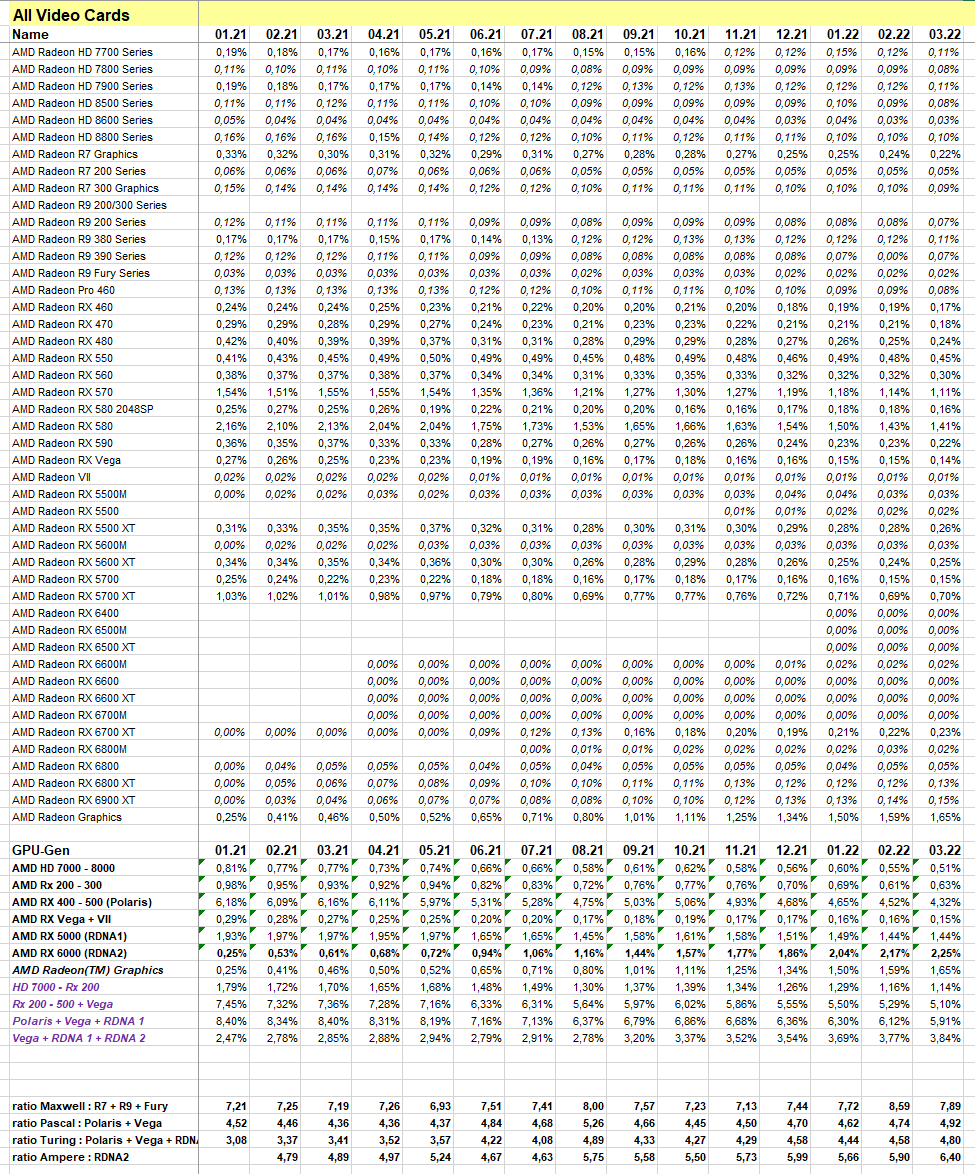 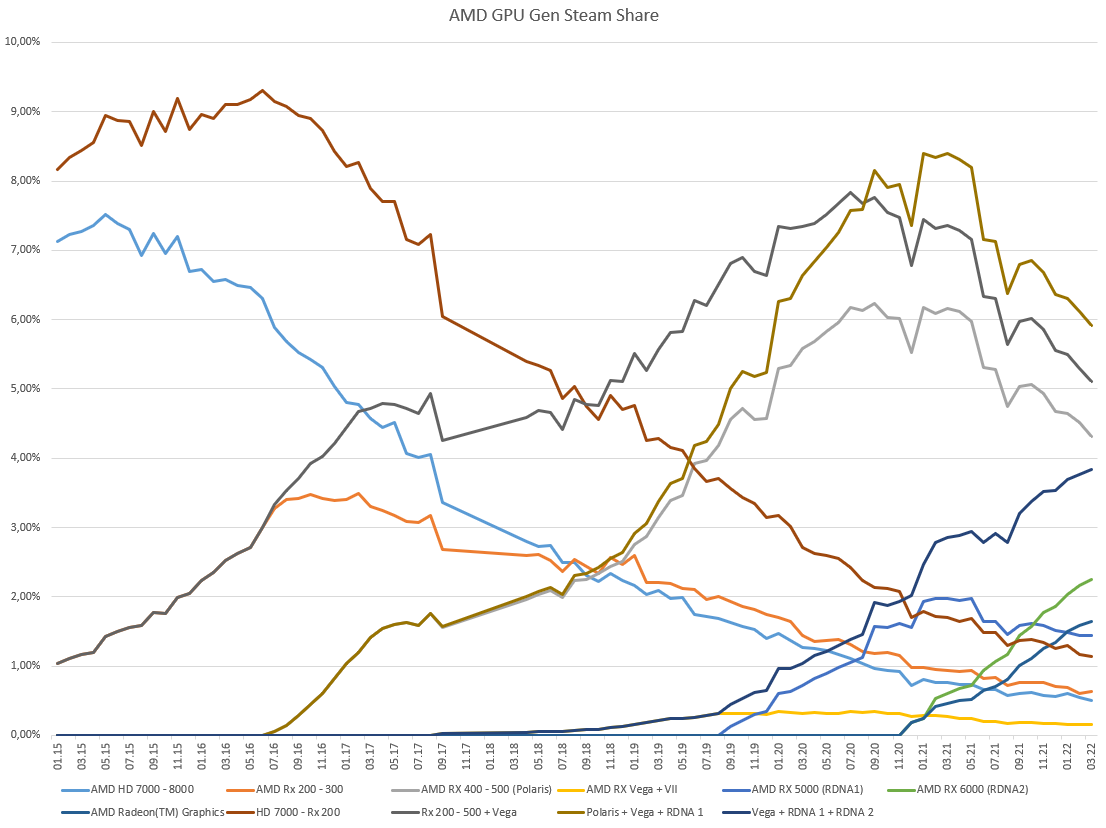 With this raised bar, almost 20% of the Steam hardware base are now "fully raytracing compatible:

Windows didn't lose its dominance so far for Steam gamers... over 96.5% seems to be a new record. 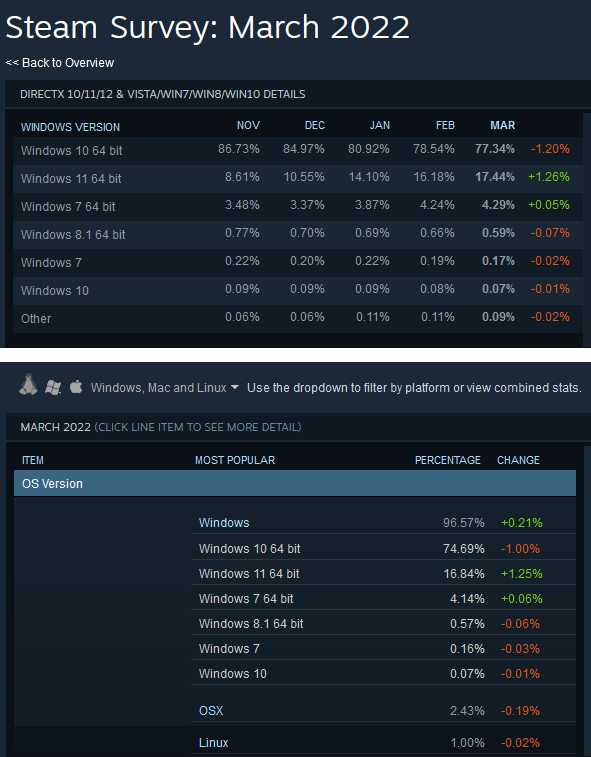 Since I want to track the Steam Deck, I took a closer look at the 1% Linux systems. 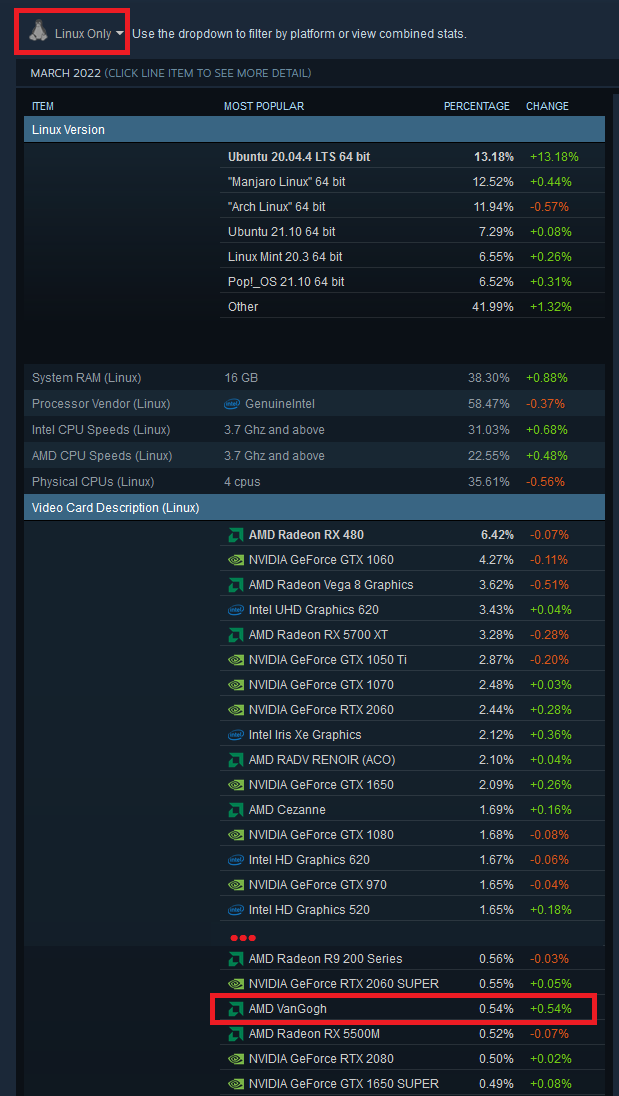 So surveyed Steam Decks are so far 0.0054% of the total Steam hardware base.

The unreported number will be much much higher, so the next hardware survey will be interesting.

I think you're making the right decision adding those generic cards to RDNA2. Steam has had a problem for years when in comes to tracking AMD cards, and they still haven0t fixed it (they're either unable to do it or simply don't care).

Thanks for the numbers

I actually don't think that the generic RDNA2 are discrete GPUs, but rather 4000/5000 series APUs and the actual RDNA2 GPUs are flagged under the "DX8 or older" GPUs.

Still, it was the right move for the time being, as it brings AMD and NVidia to a more realistic balance.

One thing we all seem to have missed: Hexacores have finally overtaken the quadcores as the most prominent CPUs in the Steam Survey:

It will take a while before octacores will be able to do the same, though...

Those 5*core CPUs confused me, so I looked a bit and yeah, they don't exist. The only option is people gaming on a virttual machine with only 5 cores. Weird.

I guess the same goes for those heptacores.

Do the cpus report how many threads they have or only their number of cores? Because if not, it might be very difficult to achieve.

It seems to be easy to find out all the relevant numbers, at least in C#: https://stackoverflow.com/a/2670568 It's probably not all that much harder in other languages either, so Valve should definitely be able to do this.