Next month we should see the 4090 making it's entrance. And ideas how much it will reach in terms of percentage?

Big losses for the Nvidia xx60-GPUs this month:

Almost all other GPUs gain percentage points from these 6.6 percent, good month for AMD. 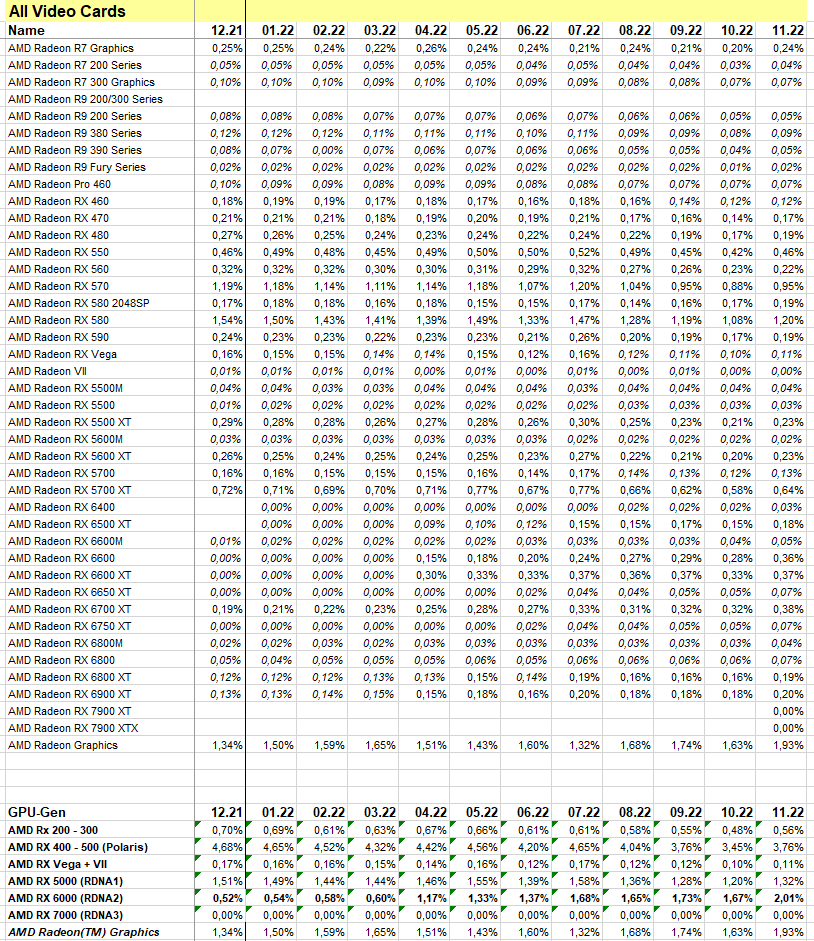 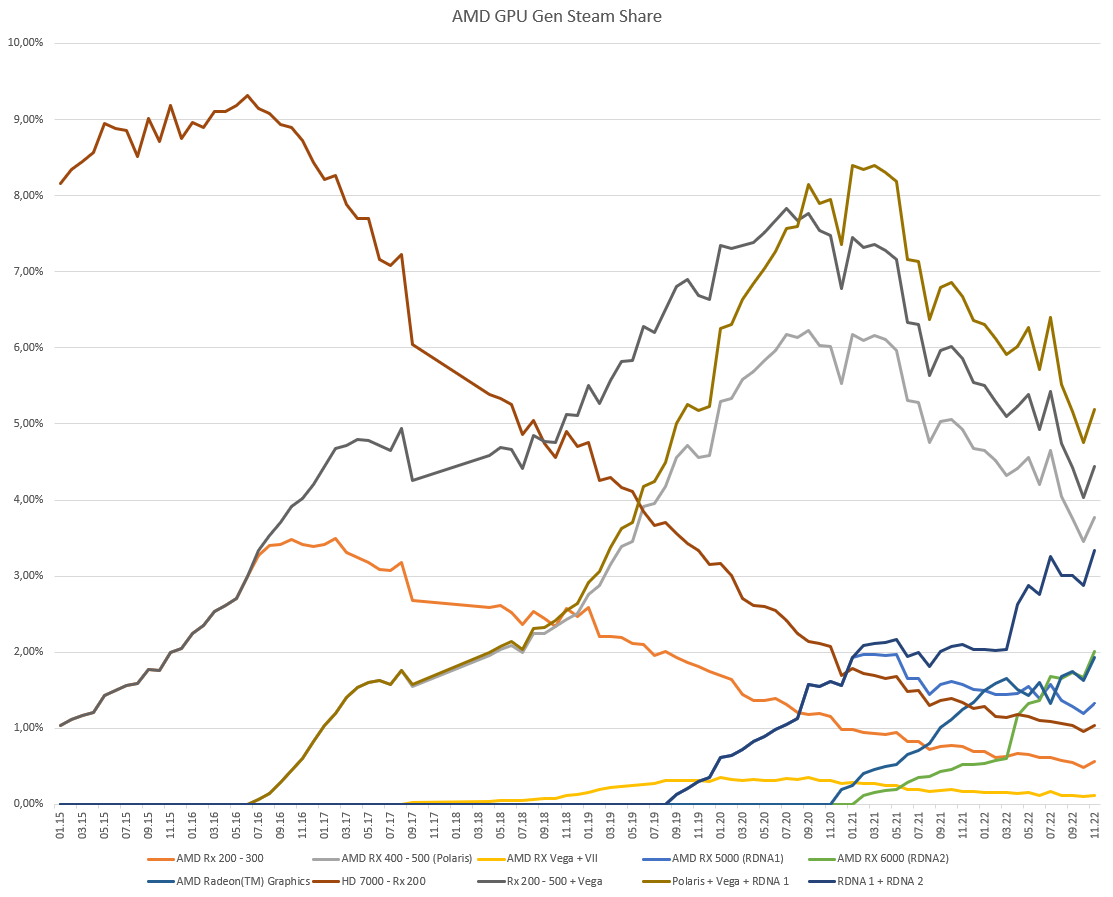 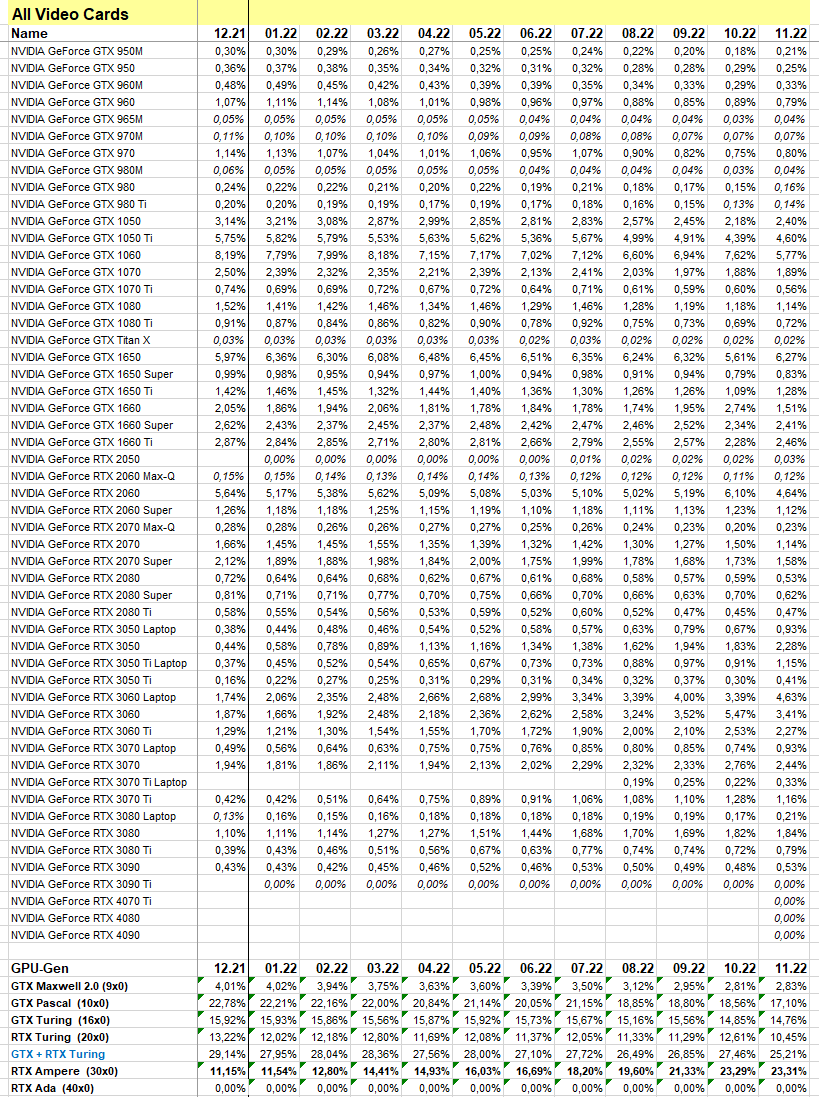 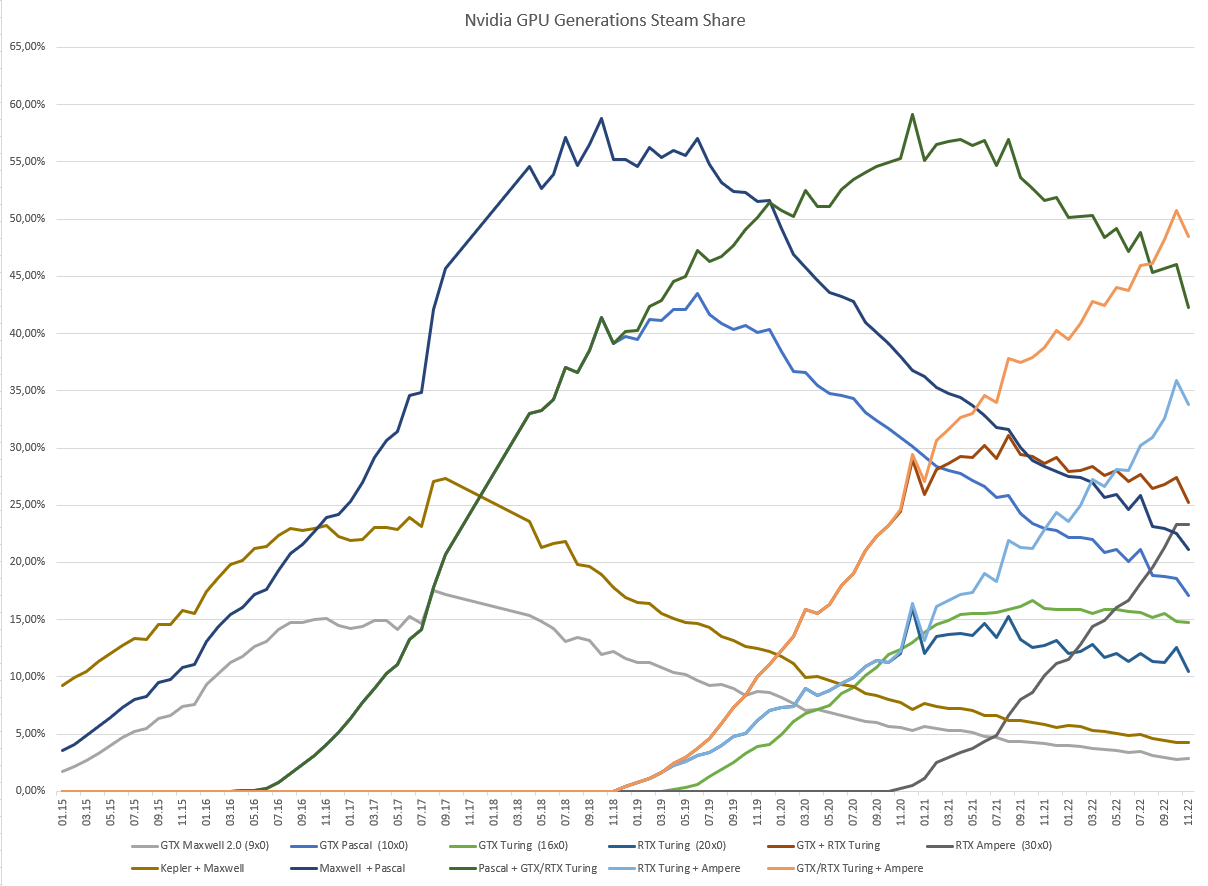 CPUs are at a 2:1 ratio again, last month's data was a fluke: 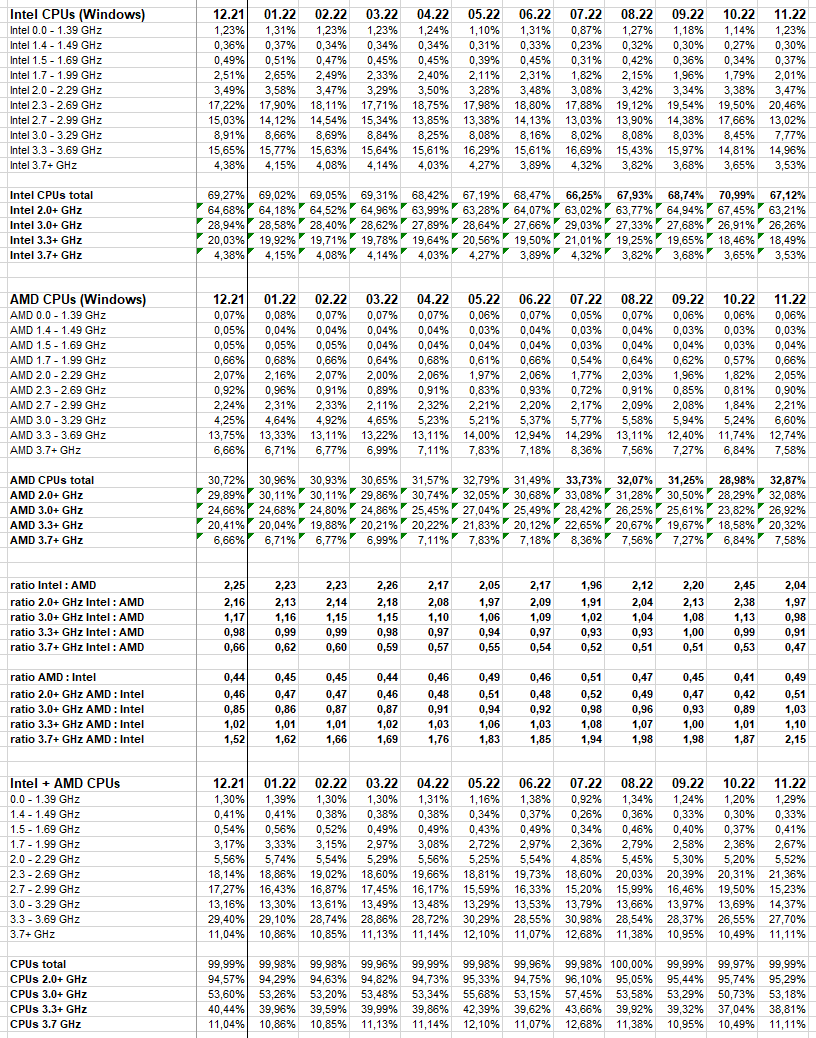 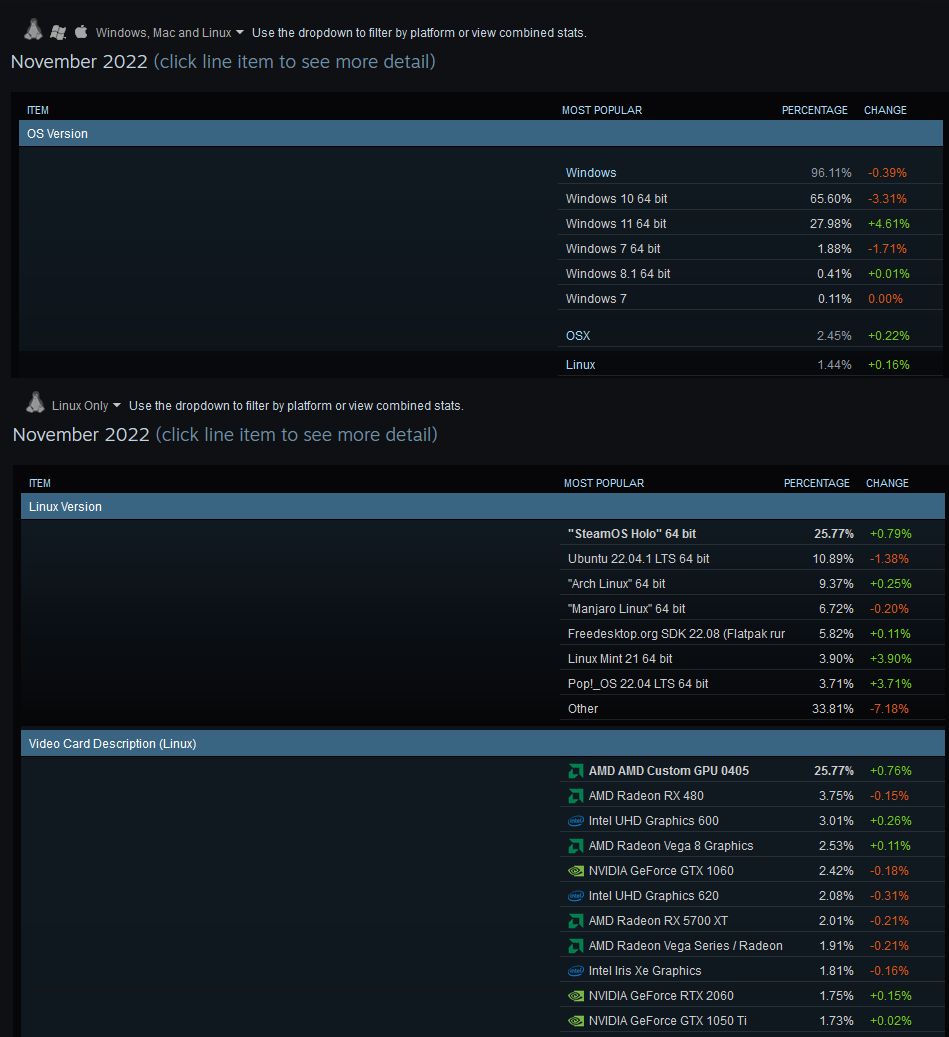 And considering the price disparity between AMD GPUs and NVidia GPUs of the same performance class, plus maybe the RDNA3 launch, I could see AMD continuing to gain some more market share over the next few months. Both Ada and Ampere are simply overpriced right now to compete, and unless NVidia drops the prices, AMD should continue winning some more share little by little.

No Intel ARC GPUs in the charts yet?

That sudden drop for all the xx60 GPUs doesn't seem natural. They were either overtracked or something else is going on because it makes no sense that so many users of those cards had decided to replace them at the same time. And it doesn't make sense either that all AMD GPU families have gone up, even the older 200 and 300 series.

But well, that's a problem for Valve, not us.

(By the way, sorry for posting this late, but a couple months ago I decided to search for an old thread and, since then, the threads from My Topics, Subscribed and even the Hot Topics appear listed by the time they were created, with the oldest ones first. And well, I still haven't been able to fix it.)

The 2 months before they had an unnatural push, so this month is more like a correction in that regard. Over the course of those two month, 1060, 1660 and 2060 each gained over 1% despite their age, while the 3060 even won over 2%. Especially the October numbers were suspicious, as those 4 cards rose a combined 4 percentage points that month alone.

I see. Thanks. Something went wrong in September and October and they corrected that. But it's odd that the problem has only, or mostly (I haven't checked all the other cards) the Nvidia xx60 cards.

My guess is that those are in cybercafés and the like, and thus got counted several times over. Cybercafés tend to use these higher mid-range GPUs, as they generally are powerful enough for the newest games and not nearly as expensive as high-end cards, but last much longer and thus are more economic than a cheaper xx50 card.

Only small changes since last month... no Ada yet, no RDNA3 yet 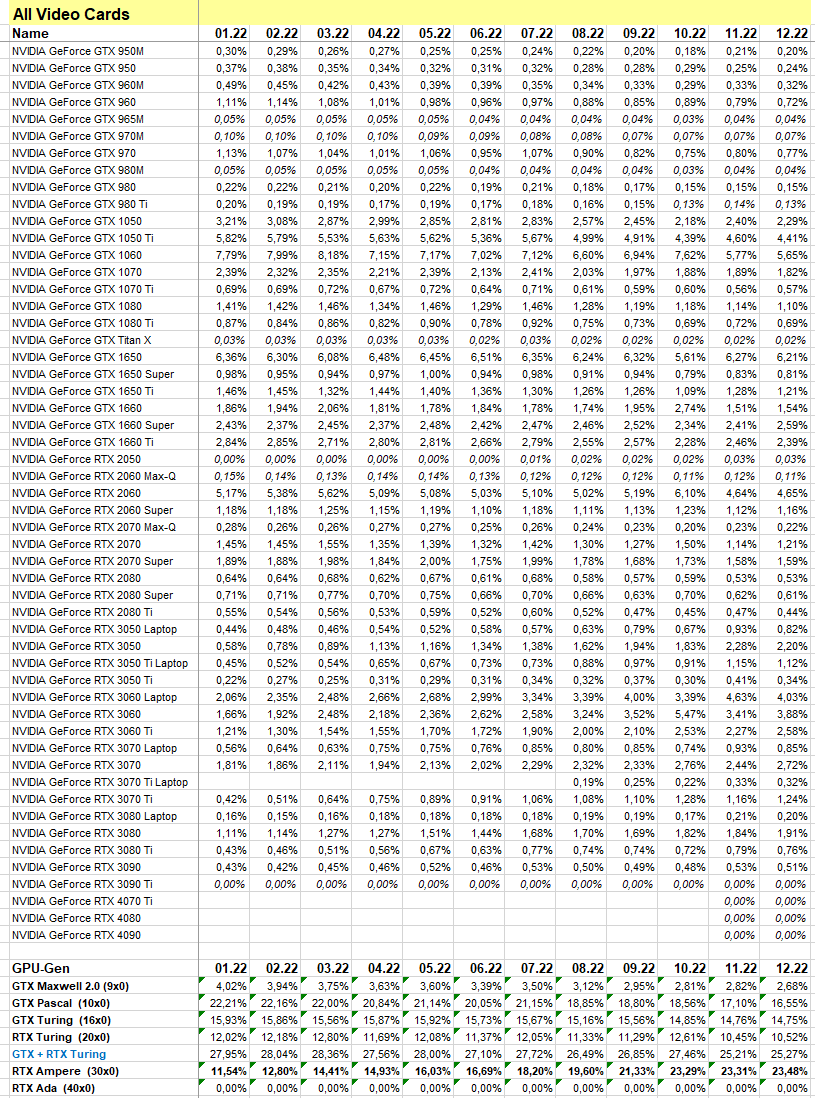 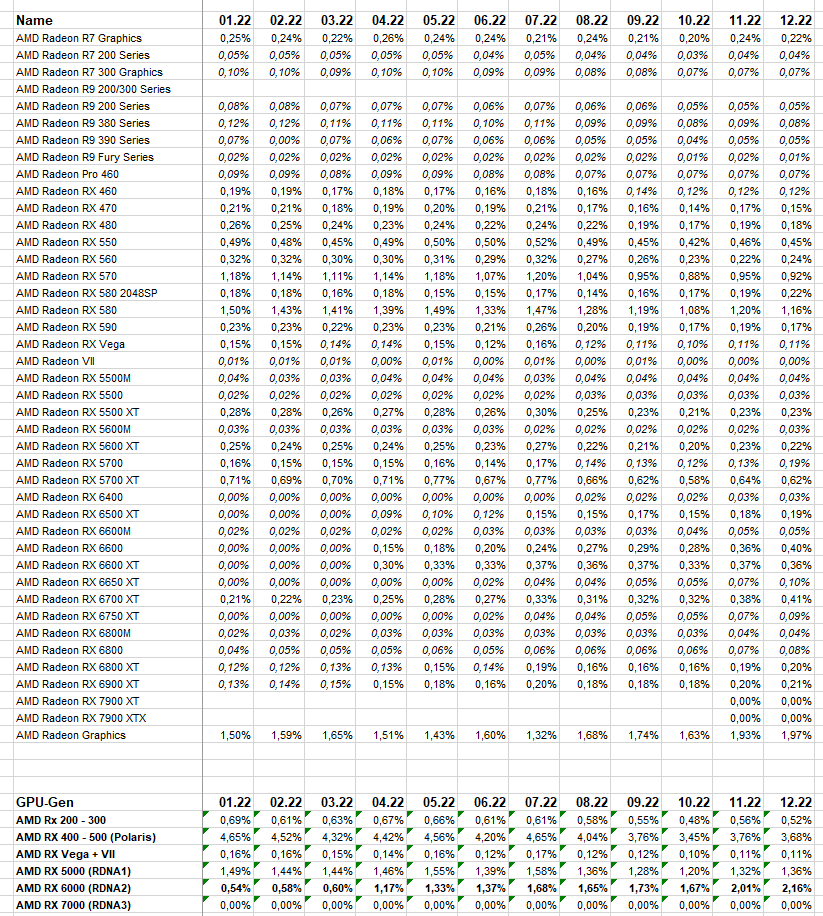 Valve seems to have bigger problems again to identify a lot of GPUs so that they are counted as DX8 GPUs: 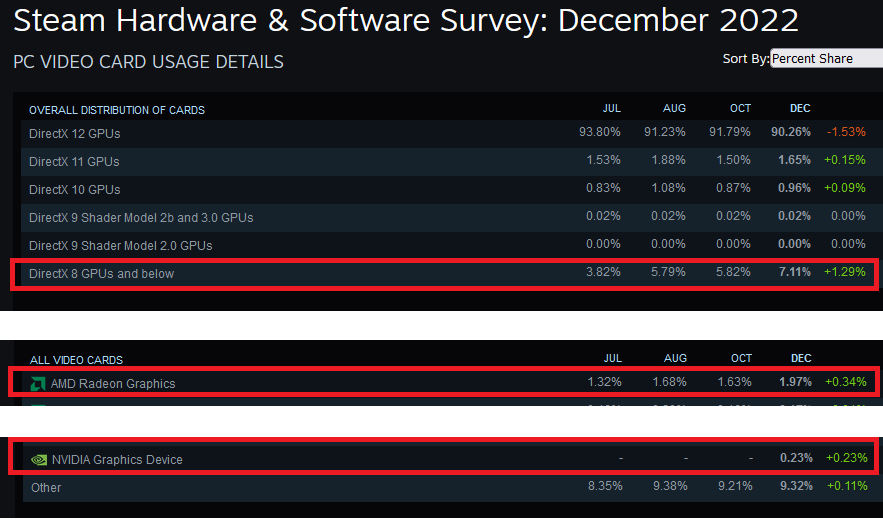 Given how expensive the new released cards are, and how expensive the upcoming ones are rumored to be, It will be interesting to see the adoption rate of the new cards, and many upgrade from the RTX 3000/RX 6000 series to the new ones.