It happened after the Iran deal. The meeting is still on with NK and Trump. Looks like it will be fine. NK will do what China tells them to do.

Also your friends in Iran are quickly back to burning flags and chanting death to america, like they have been, before the deal. after the deal, and after the deal was dead. sarcastic: how my heart bleeds for them. 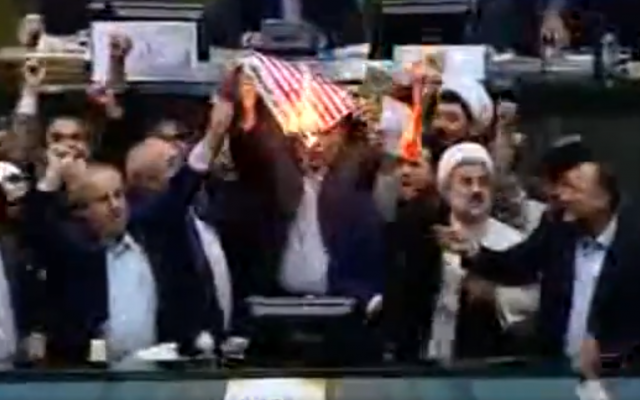 we were supposed to die when the strike happened? any more prophecies? LOL

They were.... scientists have been there expecting things.

They had all access, everywhere they wanted to go, and time and time again found nothing.

So what did it cost the USA to keep iran without nukes?
You lessen some sanctions against them = cost 0$.

Instead I'll just see who wants that deal to stay and who wants it gone. Israel for instance is a sworn enemy of Iran and Israel is happy the deal has been turned down by the United States. Now if this deal was such a huge shackles on Iran why is Israel happy to see the deal off? Israel should be happy that the deal remains (If that deal was really something preventing Iran from making nukes) but that's not the case. So Israel's opposition to that deal is a clear indication that the deal is not so binding as some leftists would want us to believe.

Isreal is probably hopeing the US decides to bomb any and all installations that can enrich uranium.
Hell Isreal will probably join in the "fun" and help the US bomb them.

Maybe but that's not the issue we are discussing here.

You asked why Irsreal is supporting the breaking of this deal.
Thats my opinion, they probably rather see Iran without any capabilitys at all to enrich unranium.

Only way that happends is if you destroy the facilities.
So yes, that is what we were discussing here, you asked why.

What a moron. All independently verified evidence confirms they were acting in accordance to the agreement. By backing out without the support of evidence or international allies, Iran is now free to resume their nuclear weapons program.

Worse, West Korea has arbitrarily made it harder for itself to re-negotiate the terms. Since it was West Korea who reneged on the agreement, Iran has leverage to negotiate a less restrictive deal...if they're even willing to negotiate with West Korea at all.

Worse, other nations are looking at this as proof that agreements with West Korea are meaningless. This puts West Korea in a position of weakness in diplomatic negotiations, Brokering the release of West Korean prisoners from Kim-Jong Un just got a whole lot harder, and now North Korea is in a position of strength when making demands to South Korea and China during the peace talks.

So, in summary, West Korea has destabilized the Middle East (again), put its allies at risk, squandered political capital with allied nations, put the opposing side in any diplomatic negotiation in a position of strength, jeopardized the lives of her own citizens being held prisoner in North Korea, threatened the peace talks with North Korea, and all they got in return was Iran claiming a legitimate free pass to develop nuclear weapons.

Kim-Jong Drumpf's regime continues its unbroken chain of bad decisions, this one so moronic it is legendary.

Supporting incompetence of this magnitude is indefensible.

Only the US pulled out of the deal, yes? So there's still a deal just not with the US.

That question was rhetorical, it wasn't really a question it was just a way for me to explain that if Israel wants to see that deal off it's because it's not that much of a binding deal. OBVIOUSLY if the deal was really that much binding, Israel would want the deal to stay.

But your opinion is duly noted.