Wow, it's clear how much you despise anyone that doesn't share your values while claim to preach tolerance under a leftist umbrella.

It's ironic that the aggressive, exclusionary hatred that you preached (spewed) in that post is the very thing that is alienating so many people in the center and which ultimately got a right wing (frankly no-wing) moron like Trump elected in to office. Pat yourself on the back for helping Trump getting elected. That's why we have so many people on the left fleeing to Classical Liberal movements like Dave Rubin and others, because you have created an environment where they are made to feel guilty of their identities and ancestries. 90% of the time I vote Democrat, because of a lot of the socially backward agendas of Republicans supersede my economic inclinations, however unfortunately the progressive social agenda of the kind you preach is now becoming more damaging than that of the right. That's why the majority of the country is now independent.

Keep preaching that left wing extremity, maybe it'll buy you another 4 years of Trump once again.

Yes, disregarding and de-platforming are the tools of the SJWs.

One can care about modern issues without all this misguided nonsense and entitled power grabbing that seems to be leading us in the west towards an Orwellian nightmare with thought police and all. This is just tyranny and fascism in the guise of good intentions.

So basically this post ironically illustrates what many have issue with when they refer to "SJWs" in the first place...

I despise the rise of this Authoritarian pseudo-liberalism that obsesses on identity politics and phony activism, and this Fascist-esque notion of viewing mere words as somehow violent acts which must be snuffed out and of which people must be punished for and sheltered from. It deserves to be mocked. And this is coming from a liberal btw.. It IS possible to be 100% for true liberal values of civil rights, equality, and freedom, and yet shun what the left has largely become.

You're pretty much fighting a fantasy based off these ominous lectures and statements; a "boogie man" that these days only describes a very small fringe of loonies on the far right. Where are all these vile racists in America today? I don't see them. The KKK and Neo Nazis combined probably have like 2,000 people. (and fun fact, the KKK was a creation of the Democrats. Sure they were a much different party back then but the fact remains that they were still Democrats).

And yeah, obviously the KKK, Neo Nazis and the like were and are evil, terrible people, but what I see is you essentially equating some dude on a forum trolling safe spaces to these group and THIS is precisely where so many find problems with SJWs.. Everything's black and white to them. They've ironically become the new version of Reactionaries in many ways.. And come on, I'm no Republican, but it's also asinine to imply one of the two major parties in America has some major commonality or relation with these fringe crazy groups. It's like saying Democrats = Antifa rioters and cop killers. Maybe we can just stop demonizing everyone and assuming the worst of them because they think a little differently than us?

Meanwhile, at least THESE days, there is a growing amount of the mirror image of these far right evil racist boogiemen on the far Authoritarian left who basically get their rocks off trying to shame and demonize all (especially men who didn't happen to be born as "people of color"), who don't buy into their victimhood bs which is just used as leverage to enforce their beliefs onto people that don't follow this cult-like mentality. It's the modern version of religion..

Reading this post you'd think we're living in 1950's America. I know it's more exciting and feels good to fantasize about fighting on the front lines of some major civil rights revolution when we're all sitting around bored and spoiled glued to our gadgets and relatively well-off. But the truth is, the civil rights and women's rights movements already happened several decades ago, and these days the America (for the MOST part) provides equal rights and opportunities for everyone, at least when it comes to race, ethnicity, religion, and gender.. And to act like it hasn't for my money spits on the immense progress and accomplishments of the civil rights movements of the past. Sure the country's far from perfect, but it's now a land where anyone can prosper if they work hard enough, and perhaps one of the most free, prosperous nations in human history. And yet there's seems to be more hysteria and crying than ever about identity politics and victimhood culture that people are getting tired of and finding little to no evidence of anymore. Dave Rubin used the term that I favor, "the Oppression Olympics." It achieves nothing but further divide people into groups.. If there's any significant inequality in the US today it's class/wealth based, which is why I and so many favored Bernie :/

What people describe as "SJW" aren't the virtuous civil right marchers holier than thou people you envision. Maybe they once were, when there was actually a NEED to fight for civil rights in the West, but they have become a parody. The term is used ironically, as most of these people are merely spoiled middle class white kids who get off feeling superior by shaming, demonizing, and shunning everyone as "racists" with little to no basis of truth while completely diluting the term, and sometimes even rioting over everything they disagree with. These people are often everything they describe their self-proclaimed "enemies", the only difference is, there are many more of them. I find that these people are often the racist, intolerant and change-resistant group of the modern era.

At least this is how I view SJWs, but clearly you see it differently..

I guess the reason this got me goin', besides the mention of free speech which is a hot button issue with me, is because the language in this post has very totalitarian vibes to it, which as a left Libertarian "triggers" me as the kids these days like to say :P

Last edited by DarthMetalliCube - on 05 April 2018

I always find it strange that someone can call themselves a liberal while preaching government increase in size, interference and limiting of individual liberties of people who don't agree with them.

I can only consider someone a liberal if they at least believe in free market, free society, freedom of association, etc. So yes if some nutjob want to have his shop and only sell to neonazi customer government shouldn't interfer, but every citizen have the right to mock him or not make business with him. Also if a church decides it want to marry gay people it should, and if they want they also should not be mandated, while any form of government shouldn't even put any legislation on marriage above the consenting adults, even if they are 10 people that want to live together that isn't government business unless one or more of those aren't there because of their free will. 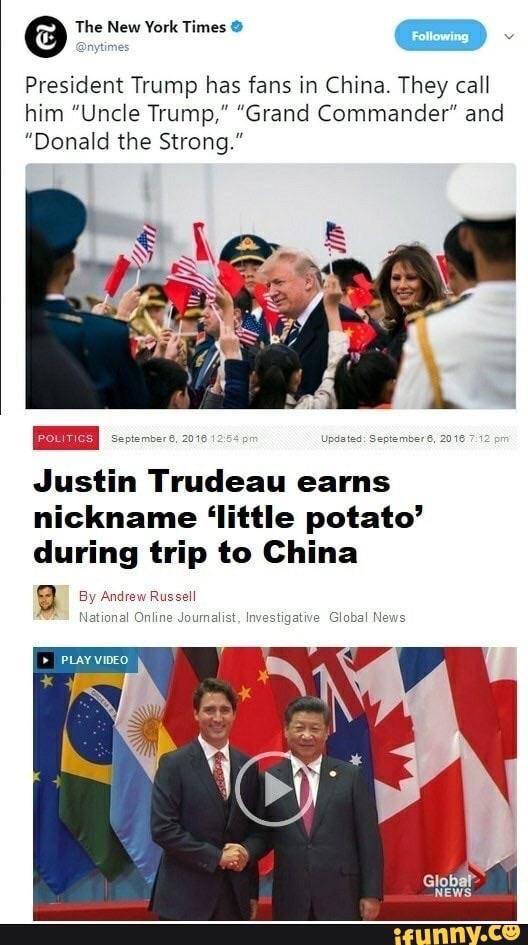 And I dare anyone say NYT is a pro-Trump newspaper.

I am not Canadian, but I am not too fond of anyone who sucks up to Saudi Arabia and Israel.

The issue I have with SJW is why they do they go around and declare they are so righteous and correct and everyone is wrong and then shout down any opposition with name calling and not through debating their position?

My challenge to SJW is that if your opinions are so correct and so valid, debate them and let them face a critique.

Because I see people like Jordan Peterson becoming popular because he is a scholar and a lot of his critics are mostly SJW who are not very intelligent but extremely self-righteous.


That is why I dont take SJW seriously because most of them are like Alara317 who resort to labeling anyone who does not subscribe to her viewpoints as Nazis, alt right, KKK or the wrong side of history.


I think my lesson to SJW is that most people likely agree with your viewpoint but don't like to be called names because they do not subscribe to every tenet of hard left progressive ideology.

I've edited your post.  Do you not see how that equally applies?

And you're suddenly the guy with the VR headset and everyone else is the woman.