You say it sucked, but also say it has weaponised Rhinos? Oxymoron much?

I enjoyed the movie for what it was but no it was not the greatest superhero movie nor did it suck either. When it all comes down to it, its just another personal opinion about a movie.

Just like books, movies made from any different source does not include a lot of the back history. There was a lot changed within this movie compared to the BP comic. Even the fight with KillMonger was different in that Killmonger had poison on his blades in the comic which is why he was able to defeat Tchalla.

I know. I was actually gonna make a KFC joke on Twitter but my wife would have thought I was serious and we'd be eating KFC for dinner! 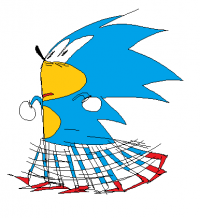 Oh boy I'll take a stab at responding to this.

I agree the ritual is a bad way to decide the king, but it belongs more on a list of why Wakanda is a poorly equipped nation than it does on a list of why Black Panther sucks. This is like saying Hamlet sucks because Claudius becomes the King only because he was related to the former King and not because he was fit to lead Denmark. There's nothing wrong with portraying a nation with this sort of tradition, it isn't unrealistic.

Also, knowing the ritual's rules would in no way make the movie better. It isn't relevant since none of what you're concerned with happens. Maybe it would have made Wakanda more well developed conceptually, but it doesn't matter.

I get this one, but I can provide some rationalizations. There is nothing that makes spears less advanced than guns, except how we perceive them. Technology doesn't go from one invention to the next in a clarified order, and who is to say that Wakandans didn't realize some advantage provided by close range vibranium weapons over their long range counterparts. I still agree for the most part, if a sniper did exist conceptually in Wakanda than that battle would have been very different. Plus, there are a lot of things wrong with the final battle, but Weaponized Rhinos? Nah that's cool and hilarious.

Again, technology doesn't have to progress in any certain manner. Besides, we barely even saw the ship from 1992, and definitely not well enough to deduce that it was the same thing. Same cloaking tech? Sure. They probably perfected that long ago. But we don't even see the inside so we can't make any real comparisons.

I'm sure you could, except what did you even learn about the Wakandan economy from the movie? It's never touched on.

Yeah but Killmonger had the ring. Sure he could be lying, but of course W'Kabi brought him before T'Challa since he brought them Klaue's dead body. After that, all that mattered was whether T'Challa excepted his challenge, and he already knew who Killmonger was, so he did. As for the challenge being over, ¯_(ツ)_/¯. Maybe family member can challenge whenever.

Nothing wrong with this. N'Jobu being a spy is perfectly fine. It's explicitly said he betrayed Wakanda because of the suffering he saw in Compton. What more reason does a betrayal need? Some people are nice like that, not caring for their own wealth.

Do you want Black Panther to become Exposition: The Movie? It's obvious only the king is supposed to eat the fruit. There's no rule about things needing to be explicitly said. In fact, the opposite is true. Most writers and filmmakers will tout the practice of "show don't tell". The audience isn't filled with idiots.

Just because he tagged Bucky doesn't mean his top speed is faster than a car's. Plus it would be exhausting to run Klaue down, and he conserved a lot of energy riding the car. (though I don't know how much stamina T'Challa has)

Because that's where is ancestors lived, it's where he was born, and it's where the people he leads live. The Jabari Tribe are extreme traditionalists so it makes sense they don't care for modern stuff.

It doesn't matter what's in the herb. It serves a purpose, and we're given reason enough for its properties.

There are plenty of things wrong with Black Panther, but a lot of these are just poor attempts at nitpicks. Like come on, if you're gonna make a whole thread about why Black Panther sucks talk about real stuff. The CG, the tension, and the pacing are just a few of the very real issues with the movie you could have talked about.

Meh its a comic book movie about a man dressed in a metal catsuit. No need to overthink it

The only thing that sucked though was the CGI. Its really noticeable on 2nd viewings. Its phantom menace levels at times.

This was more of a poking fun "Cinemasins" type thing. I can overlook like 90% of the stuff I posted. I was just bored at work.

I actually do have some legitimate gripes with the film but they have to do with certain stereotypical behavior and a couple of decisions made. Those won't be discussed here because of the audience. On the whole, I actually really enjoyed the film and they did a lot of great stuff with the property. I wasn't really out to attack it. Hopefully I get to see it again, soon.

Haha, I was bored as well and thought it'd be fun to respond. Sorry for getting vindictive by the end, I got too into my response.

Nobody is going to mention that the Lexuses 8n the Car chase which where completely bulletproof and made of Vibranium where shot to pieces with a single blow of klaue.

If a simple sonic device could depower vibranium why don't the tribes use that against each other. Where the duck was Captain America. Last time he was in Wakanda after Civil War. He could at least have made a cameo.

Not seen it yet and unsure if I will like it. I enjoy super hero movies but they have to be story led with decent characters. I'm no fan of movies that are just a sequence of explosions and moronic soundbites with everyone trying to look as cool as possible. I like well directed movies where scenes flow correctly into each other and make sense and you don't feel like the movie is just a mix of almost random scenes. I like movies with a bit of soul and angst.

I didn't know a thing about Black Panther before watching it, but I felt it was rather average for a super hero movie. I liked the actors a lot, but the story was boring and predictable, and the visual effects were very poor at times (felt completely fake in some takes).