Ouch, typos! Either I wrote this on my phone while on a bumpy ride, or I was drunk =P

Anyway, I just wanted to check in to say I'm pleased Keith Lee won, that guy is beyond Mike Awesome level.

That match was the only WWE match I've cared about in months. I have pretty much entirely migrated to AEW.

I was watching AEW when it first aired, but COVID and a lack of an actual crowd just really killed my enthusiasm to the point I haven't been watching anymore.

I'm not going to comment on the WWE quality. Because I'd be lying if I said I wasn't enjoying the crap out of NXT and some stuff that was happening.

However, I have tuned out of WWE, and am not watching any of their programming (despite continuing to follow it) because WWE has been more unethical than usual in the last year or so.

I'm a bit fan of US politician Andrew Yang right now. He's a longtime WWE fan (for decades) and has been speaking out against them recently. Now he feels like he finally has power to do something about the problems he's seen with the company for decades. He's the US politician I relate to the most, being that he's close in age, he reminds me of a lot of my friends; of all the ones in the democratic primaries I'd want to have a drink with: Yang, Booker, Castro, Ojeda, and Williamson - it's not that I dislike the others, it's that I don't think I could have a conversation with them =P 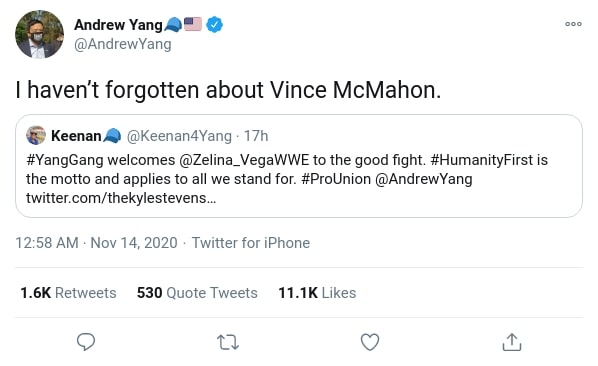 She got thousands of new subscribers during this full stream, got her a little emotional:

Luke Harper has passed away at the age of 41.

Brodie Lee or Luke Harper, he still had so much to give.
My condolences to his wife and children. 🙏🏽🙏🏽🙏🏽

Just a bit of trivia.

Charlotte Flair is about 950 days including NXT, RAW, Smackdown, and her nearly 200 days as Divas champion. She's also the current tag champion with Asuka, but their reign is fairly new.

As a note: WWE counts Fabulous Moolah as #1 with something like 10,000+ days, but that is just storyline based on the fact that WWE bought the NWA women's title off of her and backdated her reign to 1956, ignoring the belt's history and the fact it wasn't even a WWE title. Fabulous Moolah's actual WWE title reigns amount to 328 days.