I just finished the game and thought the ending/game was fantastic. It was a happy ending for booker and anna, but it was also sad since the Elizibeth we got to know throughout the game will never exist. There will be only anna.

I think it was nice how the developers pulled through most of with without noticeable plotholes and a nice sense you got things pretty wrapped up and now it was up to you to understand it. Of course the whole baptism thing is kind of shady and I still haven't come with a way to pull it without objections, even after reading this thread and its possible apologies.

Now if you want to get even crazier without snuffing or smoking anything, go check the theories under principles of timelines and dimension on the Chrono Compendium. These guys over there were into something, definitely, haha.

Anyone else was utterly hacked off by Handymen on hard difficulty? They're near fucking impossible. And that ghost section. Jesus.

I'm playing it on hard.

I haven't had too much difficulty with the handymen, but they're huge sponges on hard so you I had to be really patient, I generally just kill everything else then run around like a freak.

I'm at the 3rd ghost siren.  Having the same boss 3 times within like 1 hour isn't exactly cool, particularly when the boss's isn't exactly fun. If you have that fire bomb, or shock jockey upgraded. You can burn the corpses, so they can't be revived, and die infinetly, if you didn't know. Then kill the boss.

Well fuck. I just lowered the difficulty to medium on the siren. I got to siren on hard then just switched to medium, that was my first playthrough of the game too, and I haven't played any PC FPS games since CS:S about 4 years ago, bit disappointed at the length now that I think about it, it was about 10 hours playtime to get to Siren on hard for me, and I haven't even had that much experience lately.

The liked the ending. But I've seen versions before.

My main question is,

1) Where he becomes comstock. This gets destroyed. But, why can't Booker just take all the elizabeths and be big happy family,  instead of the elizabeths killing booker, and thus killing themself? I guess if I looked at other time travel things. No matter what they do he will always become comstock because of convergence, and always be locked in their tower until false shepard frees her. But why can't they continue you on after that? I know it can get quite messy with elizabeth's powers.

2) Where he's a good daddy. But wouldn't this universe exist anyways, just not the booker you played with in the videogame.

My complaint about the ending

The thing that doesn't have to do with the ending being clever, or having holes. Is that the ending pretty much discards the current elizabeths relationship(and the best thing about the game imo), the current booker relationship for the sake of a twist (albeit good twist), and there is never really a conclusion between the two characters that you grew with during the story because elizabeth after the siphon is destroyed becomes omnipressent and that's the last you see of the elizabeth that you grew with, so to me it was emotionally unsatisfying.

You're supposed to be happy, because booker gets reunited with his daughter, but didn't that universe exist before the game? and that booker isn't the booker that was with you during the game. 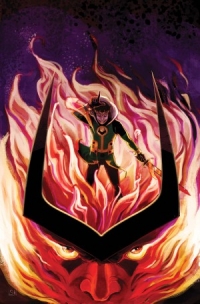 It was too at odds with the rest of the game. I also liked how political the first have was and it all got thrown out the window.

Somewhere in the middle of the game i had an idea on how this could end and i was hoping it wouldn't end that way, because i wanted to keep the idea for myself and write a story about it.

so i liked the ending hehehe.

it was not really that special from a sci fi kind of view, but the execution was exellent.
my only gripe with the game was that it could have been so much more gameplay wise. i really would have liked a more "Dishonored" approach, allowing multiple ways of resolving the levels.

I suppose, yeah, the ending had a bit of that bitter feel you get when some too clever writer pulls the "it was all a dream" twist.

1) That would have been a very cliche ending. Besides, if 1 Booker and a few Elizabeths are happy it doesn't mean the other millions will be. It would have been selfish (and would have created more holes to the story) to have only 1 Booker being happy and the rest still looking for Elizabeth, there's no real redemption in that.

2) I don't understand your point here.

That's the point of the ending. It doesn't do the typical "happy ever after" Hollywood ending. It does give a "happy" ending (although that last sequence in open for debate), and at the same time, the sad ending (knowing that adult Elizabeth and Columbia will no longer exist). I guess this depends on your personal taste, do you prefer the cliche ending or the sad not expected ending. I personally prefer the latter because I'm tired of the typical ending in video games and movies.