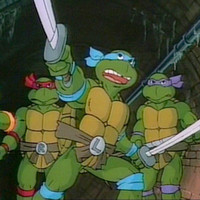 Teenage Mutant Ninja Turtles, last appearing in theaters with 2007's Imagi-animated CG feature, is again being rebooted. This time, Paramount is behind a live-action project. The ever divisive Michael Bay, Brad Fuller (remakes of Nightmare on Elm Street, Friday the 13th, The Texas Chainsaw Massacre, and The Amityville Horror) and Andrew Form's Platinum Dunes will be producing.

Jonathan Liebesman, director behind spectacles Battle: Los Angeles and upcoming Clash of the Titans sequel Wrath of the Titans, as well as The Texas Chainsaw Massacre: The Beginning, is in talks to direct. Beyond being based on the Turtles comic and its animated adaptations, plots details are being kept under wraps.

This could either be really awesome or really shit.

It could go the same path as Transformers, with the first movie being good...the second one being wtf...and well I dont know about the third one yet!

They should use real tortoises.

I can see it now...Michael Bay announces...Reboot of Inspector Gadget next!

Can tortoises act? I think they should pay some guy to have sex with a turtle and then raise the offspring as ninjas. It would take a while though. :(

Damn, you edited your post just in time, lol @ last part of the sentence mentioning you would take a while XD!

Tortoises can act very well, they have had the time to train in acting since they're immortal!