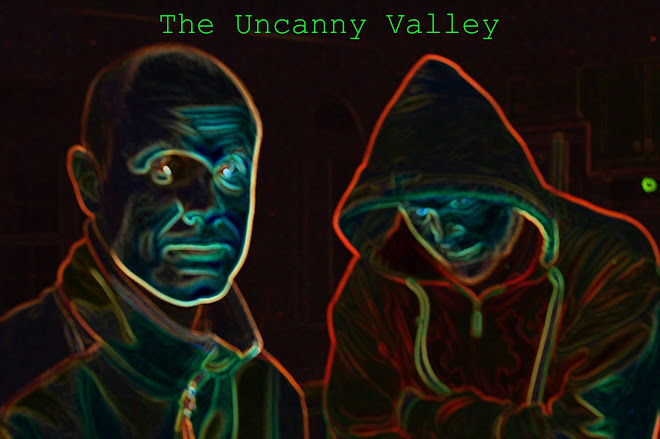 As many of you know, I'm the guy who praises HEAVY RAIN. However, do any of you TRULY know why, probably not. There is something that I have studied now for the last 3 years very closely, it is known as: The Uncanny Valley.

Now you might be asking yourselves, why do I care about this subject so much. Well, I'll explain. This realm that you venture into known within the "Valley" is often looked at as the point where robots, or nowadays, CGI (Computer Generated Image), look so realistic that they "almost" look or act indistinguishable from real life, there's just one problem: they're not quite there. This point is known as "The Uncanny Valley"!!! But to better explain this, I would like you to take a look at this article:

Why are monster-movie zombies so horrifying
and talking animals so fascinating?

Written and illustrated by Dave Bryant
Japanese roboticist Doctor Masahiro Mori is not exactly a household name—but, for the speculative fiction community at least, he could prove to be an important one. The reason why can be summed up in a simple, strangely elegant phrase that translates into English as “the uncanny valley”.
Though originally intended to provide an insight into human psychological reaction to robotic design, the concept expressed by this phrase is equally applicable to interactions with nearly any nonhuman entity. Stated simply, the idea is that if one were to plot emotional response against similarity to human appearance and movement, the curve is not a sure, steady upward trend. Instead, there is a peak shortly before one reaches a completely human “look” . . . but then a deep chasm plunges below neutrality into a strongly negative response before rebounding to a second peak where resemblance to humanity is complete.

Now, there's more on the subject if you follow that link.
Basically, I've been so drawn into this world that I really couldn't wait to explore it outside of watching movies on the big screen. Video Games this generation, I knew would approach this very subject, but there was one that TRULY caught my eye:

Basically, after watching, what was then known in 2006 as: "The Casting" tech demo for HEAVY RAIN, I was locked onto this subject, even deeper, from then on. It's not just that HEAVY RAIN was "looking" so good, but moved very realistically as well. However, it was still not quite there and was also thrown into the "The Uncanny Valley". I figured it would improve, so I continued to study the title until it's "true" unveiling in August of 2008.
But since this isn't a thread about HEAVY RAIN, I won't drag that out.
I really hope you guys enjoy learning more about this subject and follow that link, for those who weren't aware of what it was. It's been my pleasure to TRULY introduce you to my world of studying the Uncanny Valley. This is something that I'm not too sure if the games we play will surpass anytime soon, nope, not even HEAVY RAIN. But with technology changing ever faster by the minute, I suspect we aren't too far of from finally surpassing.....*Bukimi No Tani*  aka  "The Uncanny Valley". I will now end my thread off by showing you a pic of a CGI woman, who looks to already be helping to cross the valley....enjoy:

Just move your mouse around, it's really freaky, but cool!!!

Please comment below and tell me your thoughts....thanks for listening everyone!!! Have a nice day!!!

TURN THE HEAVY RAIN HYPE LEVEL TO MAXIMUM !!!!!
Heavy Rain will be epic !

AAAhhh, but that's just it, this really isn't a HEAVY RAIN thread, so to speak. I wanted VG Chartz to TRULY understand The Uncanny Valley, and of course, to know why they call me CGI-Quality

ok....so let me try and paraphrase. This is saying that we shouldn't try to make everything as real as possible because the slightest unrealistic flaw takes us out of the realistic mindset, but instead we should create somthing obviously fake,but emtionally and intelligently real????

Think of it this way: our brains are so smart that we can pick an unrealistic element in an instant. If we want to escape the "Valley", things must iron out into the realm of being indistinguishable from real life.

Btw, you guys, check out that last link and wait for the CGI woman to load in. Then, move your mouse around, watch how she reacts, it's soooooo cool!!!

Thanks, I appreciate it

The CGI woman thing was cool

So its your view of side of things ? Does this mean that zombies won't look scary if i looked at them with a different perspective ? Wow..I never thought of it that way. If my see a zombie i can see something is horribly wrong with it, but if you change it slightly , we can see something good ?

I really shouldn't be thinking too much.