Some things die. Don't try to Frankenstein them.

They've been "leaking" Crash since they revealed the PS4, so I'm not gonna put stock in it.

That wasnt random, this ppl dont do stuf like that without a purpose, it might not be a new game or anythign big but there is somethign Crash related comming.

The logical explanation is that he likes Crash.

But yeah, it's teasing and he knows it, they heard a lot of Crash request last PSX, there might be a deal between Sony and Activision in the works, like Sony be funding a game or Activision renting Crash to a Sony studio develop it.

The ideal would be have Naughty Dog on it, but it won't happen, not the main team at least.
So who could handle Crash properly? Insomniac. There may be a three way deal there and they are wanting for E3 when Ratchet and Clank game is already out and selling as the movie as well, so they can announce now it's Crash time.

But it feels more like a wish than a reasonable route, as Activision does nothing with the IP.
But it seems like Sony really want Crash back, so lets believe!

The team behind Knack would probably be ideal for a new Crash game, with input from some other developers too. 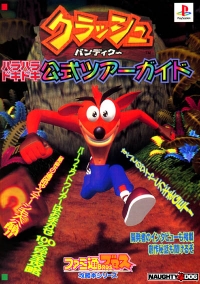 Nothing against Cerny, I actually like him a lot, but nope, he is far from ideal to handle a new Crash, judging by how average of a game Knack is.
If Crash is to ever to come back it should receive the best treatment possible.

Or he just likes the shirt.

I will buy a PS4 if Crash gets announced, no joke!

I would rather have SCE Japan Studio in charge. Puppeteer was amazing.